The 2 tables in this post are designed to produce European wars fought between 900 and 1500. They wouldn't work for the Thirty Years War or the An Lushan Rebellion or an epic clash between Allegorical Good and Evil. They're designed for regular, everyday wars fought for foolish reasons, executed without purposes, and ending without result. In short, the kind of wars I write about here. The background noise of any medieval-ish OSR game.

Here's why I built them the way I did.


Start off in a stalemate, because no matter what, it takes you a few days to get your troops organized and in position. Someone's always late, or stuck in another war, or drunk, or the peasants all have a horrible disease. Imagine organizing a camping trip for hundreds of armed people, most of whom can't read and would rather be somewhere else. Then add in a class of knights who really want to be somewhere else (fighting), and the campaign season starts slowly.

There's a 50% chance things go awry right off the start. Almost immediately, the "Goals of the War" could change. It seems like this happens a lot in medieval wars. Get your army together, get ready, and realize immediately that a) you can't achieve what you set out to do or b) there is a better way.

Examples:
1) Turns out, you can't conquer all of France with 1,000 men. Why not pillage Brittany instead?
2) Turns out, your losses over the last 2 years have been shameful. While there's no hope of gaining new ground, there might be a way to regain the lost territories.
3) Turns out you've been doing better than expected. Instead of taking one province, why not press your claim to the others?

"And you can't think of this before you start the campaign season?", I hear you ask. Oh, sometimes. But often it seems like these decisions were made on the road, or once the army's strength was known.


Or maybe you get "Death of a Major Figure". In medieval chronicles people die at the most inconvenient times. You could read this as "Retires from Useful Activity" as well. Maybe they go mad or become a monk or just get too old and tired to conduct a war.

The table in the last posts lists (per side)

The severity of any of these results really depends on the sides you've set up. Maybe the war's "leader" was a distant figure with a well-planned succession and a young and healthy heir. Maybe he wasn't.

Interestingly enough, the leaders almost never died in battle. Crecy is a famous exception, but that's why it's famous. Blind King John (yes, really) wasn't the only leader to die. Duke Rudolph of Lorraine, Count Charles of Alençon, Count Louis of Flanders, the Count of Blois, the Viscount Rohan, the Lord of Dinan, the Lord of Laval, the Lord of Chateaubriant, and the Lord of Redon also died and everyone was astonished. Ransoms, sure, those were common, but not slaughter. That's why it's not next to a "Victory/Defeat" hex.

I considered including a "Ransomed" hex or something, but I couldn't think of a way this would materially affect the PCs of an OSR game, so I left it out.

Next up, "Changing Alliances". I noted 4 major circumstances alliances changed.
1. Things outside of the War (other Wars, marriage proposals, lack of money, etc.)
2. Victories (gain new allies, lose allies who achieved their goals, etc.)
3. Defeats (lose old allies, desperately seek new allies, etc.)
4. Betrayal (deserves it own hex because it's worth it)

A "Changing Alliance" result doesn't mean "put all the participants in a stack and deal them out randomly". It could be as simple as an ally committing more troops, or withdrawing troops. It could also involve a pact with the devil.


The other 50% of starting results are "Stalemate". Just like "Empty Room" doesn't mean "Boring Room", "Stalemate" doesn't mean "nothing happens". Stalemates are sieges, feigned retreats, bargaining, negotiations, bickering, waiting for reinforcements, looting, burning fields, and all sorts of other interesting activites for the PCs of your game to blunder into.

"Stalemate" results are chained. This is deliberate. There should be entire campaigns where almost nothing of serious, war-altering importance happens. It's designed to break up the table and make it less fluid. One constant of medieval warfare is the inability to capitalize on a victory. That's why the maps have the "shape" they do. Long radiating stalemate arms separating sections of danger and activity. There's a chance you can spiral around in the 3 dangerous corners of the map, but the stalemates are designed to make it unlikely. Everyone gets a break.


Next up, "Religious Strife." Why is it sandwiched between two "Victory/Defeat" hexes and "Goals of War Change", of all things?

Where else could it go? These events never seemed to follow the death of a major figure (everyone is hoping the death will improve their position). They never seem to follow alliances, betrayals, and politics (everyone is too busy trying to figure out what it all means). The main causes seem to be winning, losing, or deciding to betray the goals of the war. If you swore a holy oath and took church gold to fund a war against one region, but then decided to attack another, someone's going to get annoyed.

The table I posted in the last post is more or less "D&D-ified (heh, D-ified, get it. Oh never mind.) You can interpret this hex as "for whatever reason, the local religion takes an active interest in something involving the war." Whatever it is, it'll put the actual fighting on pause, temporarily, as everyone decides what to do about it. That's why it's in a corner (1 in 6 chance of staying there), and next to 3 very interesting results. Once the strife is resolved (in a week or two), something is going to happen.

"Weather Disaster" and "Magic Disaster" are both hexes you can flavour as you'd like. Maybe the entire army is pelted by hail. Maybe one of the king's favorite wizards explodes. Maybe all the wizards explode,and then it rains iron filings for a week, and the iron filings turn into snakes the next week. The temptation is to go a bit crazy with the effects, but remember, a bad windstorm or rain can make battle out of the question for days. Either way, these hexes mean 2 things.

1. Nobody's doing any conquering this week
2. Maybe we should call the War off

And that's why there's the "Truce" hex between them. Truces come about when the Major Figures who had a stake in the war die. They also come about when the war becomes un-winnable. This can happen at any time. There's no rule saying you have to keep rolling on this table week after week. If it makes sense for a truce or true peace to occur, have it occur.

The other option is that they are omens. All sorts of strange events occur right before or after a Major Figure dies. The more important the figure, the more important the omen. Comets, birds, rainstorms, fire, weird births, magical events - all bracketing the death of kings and princes.

Our chimneys were blown down and, as they say,
Lamentings heard i' th' air, strange screams of death,
And prophesying with accents terrible
Of dire combustion and confused events
New hatched to the woeful time. The obscure bird
Clamored the livelong night. Some say the Earth
Was feverous and did shake.

A hairy and fiery star [Halley's Comet] having then made its appearance for several days, the mathematicians declared that there would follow grievous pestilence, dearth and some great calamity. Calixtus, to avert the wrath of God, ordered supplications that if evils were impending for the human race He would turn all upon the Turks, the enemies of the Christian name. He likewise ordered, to move God by continual entreaty, that notice should be given by the bells to call the faithful at midday to aid by their prayers those engaged in battle with the Turk.

-Bartolomeo Platina, Lives of the Popes.


Finally, "Betrayal". Every good OSR world needs a Charles of Navarre. His alignment is "Chaotic Ambitious". Charles aside, betrayals happened regularly. Allies failed to turn up. Someone kidnaps a baron. The peasants rise in revolt. A marriage falls through, or the wrong person shows up to the wedding. The most infamous kind can be summarized as:


The army of Side 1, plus their Allies, prepare to attack Side 2. Once battle is joined, the Allies remain disengaged. At a prearranged signal, they turn on Side 1 or ride off.

If that seems a little boring, go read the article on Charles of Navarre. He had some plots that would put any group of political murderhobos to shame.

Betrayal is bracketed by two "Victory/Defeat" hexes. Who knows which side was betrayed, and what the outcome will be, or if they will be counter-betrayed?

And last of all, here's a little explanatory diagram.

"Betrayal" can lead to "Siege" (but defeat can't, because a siege after a defeat is a given. It's like saying there were casualties in a battle. Somebody's going to sit inside a fortress after a defeat.)

"Siege" means "a major siege starts. Someone's capital city or a fortress with the royal family inside." It goes on until a Major Defeat, a Major Victory, or some other event settles matters.

"Goals of War Change" is between the two Sieges to give one a party or another the chance to rethink things, and possibly come to an agreement.

Major Defeats and Major Victories chain off of their Minor forms and lead to Truces.

There are Bankruptcy hexes. These are like "Goals of War Change" hexes, except that the goal becomes "get enough money to continue the war". This is where the PCs arrive. These hexes can be treated like "Truce" in that the war pauses, except only for 1d4 years.

"Enemies Bankrupt" is isolated and off in a corner because your enemies always seem richer, luckier, and stronger than you. It's a game mechanic thing.

You can also get to a "Truce hex" by "Minor Victories/Defeats", but it requires navigating a minefield of other dangers. This represents the chaos of major wars. The larger they grow, the more likely it is that some minor event sets a whole series of other events in motion. The stalemate walls between the sections are less fixed.

You could very easily make a more "dynamic" war by closely linking victories to victories, and defeats to defeats. You could get rid of most of the stalemates entirely. The system is very flexible. I hope by explaining (badly) my system, I've given people enough information to build their own.


Rewards for Reading All That

A useful Cold Weather map (roll once or twice per day) 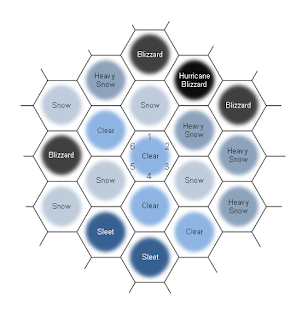 A not-so-useful Byzantine Warfare Simulator (roll once per year) 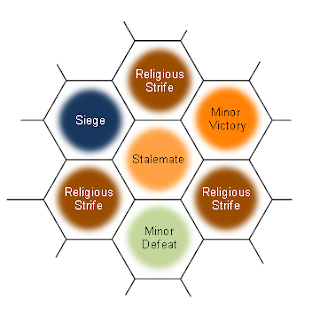 
I haven't cited my reasoning exhaustively. No offense, this blog gets less than 200 views a day. It's just not worth it to go full academic on a silly hex map for a game about elves and tomb robbing. But I'd go with

as the 4 core books I read while writing this set of posts and designing the tables.
Posted by Skerples at 00:51