In your father's time, or perhaps in his father's time, the city of Anostos was swallowed by the sea. For all their power, wealth, and learning the mage-citizens of Anostos could not avoid their fate, and so drowned along with their libraries and towers.

It happened so far away and so long ago that it might as well be a myth to most people, but it really did happen, although the true story is slightly more complicated than the moralizing myth. Anostos was a city of wizards, ruled by magic, with charms and enchantments for every occasion. Its citizens lived in peace and health. Protected on all sides by the sea, its ancient towers contained books from the dawn of creation and treasures from the forgotten past. They claim to have invented the sail, the rudder, the waterwheel, iron, and coins.

No one is entirely sure what happened, or why, but two facts are perfectly clear to the survivors. First, the ocean fell in love with the city. This is a literal and very real love. The sea is fickle and vast and getting it to do anything is nearly impossible, but it did love Anostos, and it claimed it for its own. Second, the mages of Anostos were dragged immediately to Hell.

This is why they are called drowned wizards by the irreverent masses. The ocean loves them and wants to drown them, and if they drown, they will go to Hell.

Some mages were away from their city when disaster struck. In secret monastaries and towers they try to keep their traditions alive, but they are a shattered school, bent and warped by schemes of world domination and secret power. The wealth of Anostos is gone, and with it, the legions of mercenaries, collectors, secret societies, and spies that once bowed to its throne. You practice secret rituals to hide yourself from the ocean.


Perk: You can cast spells silently. You inherit a decrepit and badly maintained spy network. If you are broke, 1d10 cp will appear in your mouth once per day.

This school gets three minor perks. Silent casting is useful, the spy network is a liability in some ways, and the copper pieces aren't likely to interest any wealthy adventurer. I'd any given town or village has a 1% chance of having someone who knows the secret code words of the old Anostosian order, passed on by a mysterious family elder.


Drawback: Cannot drink water. Other water-based liquids, such as beer or tea, are fine.

This is a fairly significant drawback. You start with 1d6 days worth of tea leaves or one bottle of wine. Tea leaves cost 2cp per day but can only be purchased in a city.

Cantrips:
1. Convince another creature that anyone who dies by drowning will instantly go to Hell. This is what Drowned Wizards believe. Lasts 1 hour.
2. Cause a loud bell to ring from somewhere due north. Only you can hear the bell.
3. Meditate for 1 hour to gain a new Save against any ongoing mental effect.

Some spells stolen from here. As a Drowned Wizard, your spells are ancient magic, the remnants of a world-shaking tradition. You keep your mind tidy and your spells domesticated. They are tools, nothing more. Unlike Elf Wizards, Drowned Wizards have a fairly flat power curve.

1. Command Coins
R: 30’ T: [sum]x100 coins D: [dice] hours
Coins will leap up and obey your single-word commands. Affects all unattended coins in 30' of you and lasts 1 hour. Coins can be commanded to follow you, hide in crevices, or serve as rollers for heavy statues, but they are mindless and feeble.


You don't have to play "the Sorcerer's Apprentice" when you cast this spell, but it helps. The coins can only roll along the ground or jump small distances.

2. Detect Gold
R: 100’ T: self D: [sum] minutes The spell name is misleading, as this spell simultaneously allows you to identify all precious metals. You see them through walls and barriers as faint shifting afterimages, but the spell bleeds into you other senses. If you cast this spell with 3 or more [dice], your eyes turn gold and the effects are permanent. You cannot sleep within 100’ of any adamantium. The screams keep you awake.

There aren't many "detect" spells in my game, so this one is even more valuable. Track creatures in the dark, locate your party, locate secret doors, impress miners, etc.

Drowned Wizards don't get many damage-dealing spells, but this spell makes up for it, even if it is a little boring.

4. Desiccate
R: 30’ T: creature D: 0
Hydrated target within 30' takes 1d6 + [dice] damage. Can also be used to turn meat into jerky or concentrate water-based liquids (wine, most acids), up to 2 gallons per [dice]. You can make a cup full of very strong brandy from a bottle of wine.

So at 4 [dice], you can grease a 40'x 40'x area for 8 rounds. This spell is very good at controlling a battle or allowing a wizard to escape. The types of creatures that aren't affected are so obvious I'd feel silly listing them.

6. Slam Portal
R: 100’ T: door or doors D: 0
Slams a door shut and/or locks it (if it has a lock). Most wooden doors will get stuck shut, and require a Strength check to open. Works on any number of door within 100', but only doors. If you invest 2 or more [dice] and target a single door, it becomes magically locked for [sum] hours. If you invest 3 or more [dice], you may magically lock any number of targeted doors for [sum] hours.


7. Light
R: touch T: object or creature D: [dice]x2 hours
Object illuminates as a torch, with a radius of 20’+[dice]x10’. Alternatively, you can make an Attack roll against a sighted creature. If you succeed, the creature is blinded for [sum] rounds. If [sum] is greater than 12, the creature is permanently blinded. You can chose the colour of the light. If you invest 4 [dice] or more this light has all the qualities of natural sunlight. Alternatively, if you invest 4 [dice] or more the light can be purest octarine, although it will only last for 1 round. Octarine light is extremely dangerous.

Light sources in the dungeon are very valuable. At one [dice], this spell is a slightly worse emergency torch, but at two [dice] it is already significantly better. And what does pure octarine light do anyway? At a minimum, I'd say [sum] damage to all sighted creatures in the area, plus whatever mutations, mishaps, summonings, and explosions the GM cares to inflict.

8. Metal Chime
R: touch T: metal object D: [dice] days
You touch and enchant a piece of metal to make a terrific noise the next time it strikes a solid surface or is struck. All creatures within 30' (except you) must Save or be deafened for 1 minute. If used as a signal, it can be heard up to a mile away.

You can balance coins to make traps. You could also enchant a coin and throw it at someone's head.

A 5% chance of a debuff isn't much, but the spell doesn't allow a Save. You could probably fix a chariot race or a bear-bating contest using this spell.

Fog is always nice, even if it doesn't scale well with higher levels.

11. Mighty Lungs
R: 0 T: self D: 0
Your next inhalation allows you inhale 10x the normal amount of air. Not only does this allow you to hold your breath for 10x as long, but if you exhale forcefully it will release a blast of air strong enough to knock pigeons out of air and polish your teeth. A human-sized creature travels 10’ per [dice], and takes 1d6 damage for every 10' traveled. A creature or object blown at another creature requires an Attack roll to hit and inflicts 1d6 damage for every 10' traveled. This spell will also blow open all the closed but unlocked doors in a room, shatter all the windows in a building, or knock the thatched roof off a peasant's shack. If you cast this spell with 3 or more [dice], Save or your teeth shatter.

A refluffed telekinetic shove, but with many, many more uses. Drowned Wizards invest in false teeth.

12. Magic Cramp
R: 100’ T: creature D: 0
Target takes 1d4 damage plus 1 damage per the maximum number of magic dice they possess, or 1 damage per HD for seriously magical creatures (unicorns, dragons, etc.). Additionally, they lose [dice] MD for [dice] rounds. Save for half damage and to negate the caster level penalty. Nonmagical creatures, or creatures that have no spellcasting ability, are unaffected by this spell.

Nothing special here, but the ability to shut down a spellcaster entirely is unique to Drowned Wizards. Fog + this spell = dead wizard. A lot of Drowned Wizard spells work better with multiple drowned wizards. A party of them could make for a very interesting game.

The mishaps are fairly minor and not too dangerous to a seasoned adventurer. The seawater could even be beneficial.


Doom of the Drowned Wizards:
1. You can no longer swim. You cannot cast spells if you are touching free-flowing water (not damp socks, but a puddle).
2. Save vs Fear whenever you encounter a body of water larger than a teacup.
3. The tide will rise to your current location, and then drag you down. Expect 3d20 merfolk or drowned corpses and one 1d10+8 HD sea monster or dragon. It will be the storm of the century. Anyone drowned along the way will join them.

This doom can be avoided by discovering a secret unknown to anyone, including the ocean, or by visiting Hell and leaving a decoy behind, or by somehow disguising your soul forever.

On the other hand, the Dooms are fittingly severe. At first, water elementals, called by the sea, sap your magic... or just terrify you. It might all be in your head. But then the ocean comes to claim you no matter how far away you are from the ocean. It's a miniature personal apocalypse. Survive it by accumulating secrets the ocean doesn't know (it loves secrets too), or by hiding. 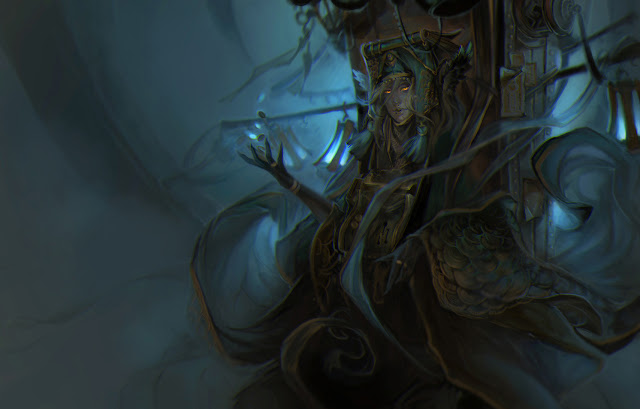