OSR: Rewards of the Monarch

Congratulations! You've saved the world / the nation / the city. The Monarch (absolute, dissipated, benign, slightly seedy) wishes to bestow a gift upon you. Big bags of gold are terribly unfashionable (and the kingdom is broke anyway / needs money to rebuild / is notoriously stingy), but as a token of Their Royal Esteem, the Monarch will ensure you are adequately rewarded.

Roll once per group per apocalypse averted. Entries with a ★ apply to one person in the group. Everyone else in the group gets the entry above or below the ★ entry (50% chance, roll once). The Monarch will generally fixate on the most responsible, clean-looking, and patriotic person.

Some of these rewards may be ludicrously out of scale with the services rendered by the group. This is intentional. The Monarch is either whimsical or Machiavellian.


1d20 Rewards of the Monarch


1. Hearty Hand-Clasp
The group is presented with a laurel and hearty hand-clasp from the Monarch.

2. Knighthood ★
One character is knighted by the Monarch in a solemn ceremony. They can be called "Sir". Most people will treat them slightly better than the heaving mass of humanity. If the character is already a knight, they are promoted to a minor barony (of some far-off barren region). If they already are a baron, someone less suitable is knighted instead (barons and above being expected to serve the Monarch without complaint or recompense).

3. Honorary Doctorates
Presented in a ceremony at Loxdon College. Stuffy old deans snoring, spotty undergraduates picking their noses and playing cards in the back, slightly tinny brass band. Bearers gain the right to wear comically floppy hats, red robes trimmed with ermine, and carry a sword on Sundays without a permit. They are officially Doctors of Philosophy and are expected to turn up to one ceremonial dinner a year.

4. A Lifetime Pension
Enough to live just above poverty. The pension starts at age sixty. It does mean, no matter what the group's members do between now and then, they are unlikely to starve in their old age.

5. The Keys to the City
Presented by the Mayor to the Monarch, then by the Monarch to the group. Enables them to avoid parking fees, some zoning bylaws, and tolls. Everyone in the crowd now knows their faces.

6. Invitation to Court ★
The Monarch takes a liking to one member of the group. They will be invited to Court at least once a year to say something witty and memorable. If they don't, they won't be invited back. If they say something gauche or rude the Monarch might exile them. Showing up to Court is a good way to meet interesting, rich, and cunning people.

7. Commemorative Plaque
Large, brass, securely fixed to a convenient building. At least one name will be spelled wrong. 10% chance of being stolen each year.

8. Commemorative Statue
Very large, bronze and stone, a sculpture group of heroic deeds near a reasonably important street. Everyone looks a little gouty and distorted. Unveiled with a flourish and a great deal of polite clapping. Immediately misidentified by every tour guide and ignorant pedestrian as a statue of "General Monkton and his Famous Charge."

9. Street Naming ★
A prominent street is named after one of the group's members, ideally one with the best-sounding name, or one that lends itself to abbreviation, modification, or ease of use. Surprisingly disreputable things happen on the street going forward.

10. Dedicated Follower of Fashion
The Monarch decides some aspect of the group is fashionable and adopts it immediately. The fashion soon spreads. The group may be credited as the originators. Luxury-hating puritans will spit at them; courtiers and tailors will fawn over them, at least until fashion changes again.

11. Royal Marriage ★
One group member is offered the hand of the Monarch's daughter (or son in some regions) in marriage. If one (or both, in some regions) is of an incompatible gender, the Monarch will simply have it altered with a legal fiction. It would be treason to refuse. The would-be fiancee is eleventh in line to the throne, rather plain, and extremely spoiled.

12. Royal Speech
The Monarch makes a rare public speech on the group's heroic deeds, patriotic virtue, and public spirit. The group won't need to buy drinks for a month. Everything is discounted. Spontaneous celebrations inconvenience them wherever they go.

13. Minor Medal
In a hasty ceremony, possibly along side several dozen others, the Monarch presents the group's members with a small medal such as "Order of Valour, Second Class" or "Honourable Bar of the Knights of the Chalice".

14. Sincure ★
A post, such as "Master of the Royal Mint Plantations" or "Trustee of the Monarch's Hound's Pensions" is found for a deserving group member. It pays reasonably well and requires perhaps two  hours of work a week.

15. Commissioned Painting
A court artist unveils a grand painting of the group doing something heroic. The painting is far too large to be displayed in a private home. It will be put in one of the royal residences to amaze and confuse future visitors.

16. Quiet Castigation ★
One member of the group is discreetly asked about their enemies, rivals, and ambitions. The Monarch uses their influence to destroy one enemy (if possible) by calling in loans, cancelling licenses, spreading rumours, or, if all else fails, framing them for a capital offense.

17. Commissioned Music
A court musician presents a new composition to celebrate the group. In a few centuries it will be one of the most well-known pieces of music from the era, but at the present moment it receives a polite but tepid reception. People still hum it from time to time.

18. Memorable Day
The Monarch declares the anniversary of the group's efforts to be a public holiday (for the next five years). It might prove so popular that the Monarch will be pressured to keep it. Bizarre traditions (floats, effigies, dances, traditional foods) arise almost immediately.

19. Inaccurate Speech
The Monarch makes a rare public speech on the group's heroic deeds, exaggerating, misremembering, and interpolating events with horrifying conviction. The group is credited with powers beyond their means, with "securing eternal peace with the Manticore Kingdoms" or "ending the threat forever." Any future disasters will be blamed on the group. People will come to them for aid on all sorts of  unlikely matters, some of which could potentially be profitable.

20. Royal Counselors
The group is appointed "Special Advisors to the Monarch". They are expected to turn up when summoned and help the Monarch solve the nation's problems, or amuse the Monarch, or perform impossible feats. The position is unpaid but extremely valuable, as they have the Monarch's direct attention. If they bring the Monarch into disrepute they will, at the very least, be exiled.
Posted by Skerples at 23:00 4 comments:

Here's another sneak preview of my pre-apocalyptic Magical Industrial Revolution book. It's a minor and unimportant segment but it's a fun one. 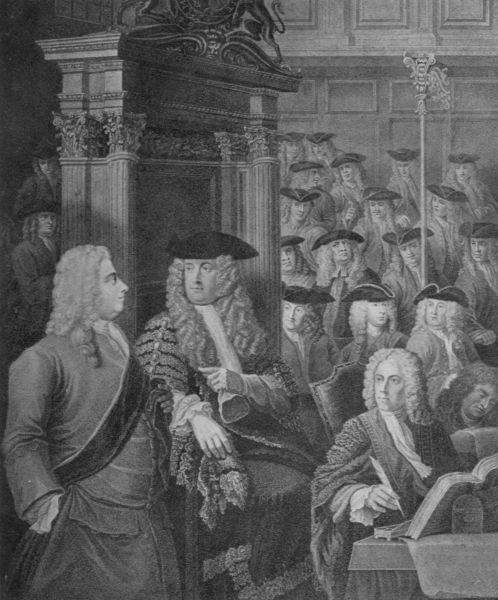 The Parliament of Endon

Being elected to Parliament is the crowning glory for many Endonians. Entering that elite social club and influencing the course of the nation is the exclusive preserve of the rich, powerful, and incredibly dull. Parliament generally lets the affairs of the nation carry on without interference, only passing a law or demanding an inquiry after the crisis has reached a terminal stage.

Getting Elected
Only men can be elected to Parliament. In a fine and well documented tradition, any women who wishes to exercise political power selects a dull, pliable, or unscrupulous person and uses them as a proxy. Everyone knows who actually holds the reigns.

Only people of Rank 3 or above can stand for election. A campaign costs 1,000gp and has a 50% chance of succeeding. Making friends with a Minister increases the chance to 80%. Well-documented public heroism may guarantee election at the GM’s discretion. Campaigning takes place during the Off-Season and requires no particular skills or talents. Giving a speech or two is traditional. Elections are held once every 2 years.


During the Season (pg. ##), an Member of Parliament is expected to turn up at least once and vote at their party’s command. Actually reading or writing laws, proposing new directives, or debating is viewed as a suspicious novelty. Once elected, a Member of Parliament can keep their seat until death unless a Scandal (pg. ##) intervenes.


Endon’s two political factions fatuously trace their ancestry to pre-historic chieftains. They each control approximately half of the 100 seats in Parliament.

The Gumperts stand for Endonian Values, Harsh Penalties, and The Good Old Days. Their colour is green.

The Bogs stand for Lower Taxes, Endonian Prosperity, and More Wars. Their colour is blue.

Control of Parliament, and therefore control of the Ministries, switches between parties every 1d4 elections, usually as the result of a Scandal (pg. ##). Anyone standing for election must choose a party before campaigning. The choice cannot be altered later. Social groups form along party lines.

Merely being elected to Parliament does not bring power or wealth. Becoming a Minister is an easy way to influence the course of the realm. It’s a retirement option, a capstone to a long career, or a potential way to avert a magical apocalypse. Ministerial power is difficult to quantify and will probably need to be adjudicated by the GM. Doing anything efficiently, quickly, or cheaply is next to impossible.

There are six ministerial roles in Endon. More could be created (with the Monarch’s assent). A Ministry of Magic has been proposed but, for various political reasons, never implemented.

6. The Prime Minister
Sets the general direction of the government. Reports directly to the Monarch. Blamed for everything. 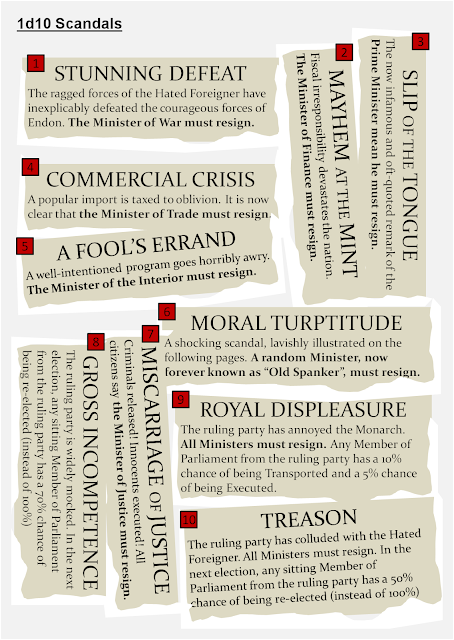 In the actual book, I'm hoping to have these look more like newspaper clippings. The scandals will be literally ripped from the headlines.
Posted by Skerples at 20:35 5 comments: