Magical Murder Mansion is today's (2021/10/07) DriveThruRPG Deal of the Day. I don't usually do sales but it is October, the month of creaking mansions, secret passages, and elaborate deathtraps. (If it's not 2021/10/07, then it's not on sale).

While writing Magical Murder Mansion, I decided to watch as many Old Dark House films as I could find. You know the type:

Optional extras include but are not limited to:

The Reading of the Will, the Secret Passage, Disguises, The Creature in the Attic, the Storm, Spy-Holes, the Escaped Lunatic and/or Convict, The Lights Going Out, A Blood-Curdling Scream, etc, etc.

ODH films were (and presumably still are) cheap to make. You need a handful of sets, generic props, a small cast, and minimal special effects (an exterior model and some rain). With a cell phone camera and a couple of lights, you could probably bang out a ODH picture in a couple of weeks. I'm not sure why you would, but it's a thought.

I also prefer black and white ODH films, so Clue (1985) and the Rocky Horror Picture Show (1975) are out. The houses don't feel as dark when the film is in colour, and the flaws in set design (and scriptwriting, acting, directing, etc.) are more obvious. ODH films aren't haunted house films. There's no ghost (though fake ghosts might appear) and no explicitly supernatural setup. There's just a house, a storm, and some pressing reason for a few characters to come to sudden inexplicable ends.

Here are some films that might be worth watching, ordered by release year. Most of them are in the public domain. I've tried to link to the highest quality videos I can find. This isn't an exhaustive list (there are a lot of ODH films).

Full film (though may not be a public domain upload).

A bit of horror, a bit of mystery, a bit of comedy, and a bit of romance (or at least melodrama). Classic '30s snappy dialogue, wandering accents, pre-code nightdresses, and the origin of a dozen cliches. Not as bloodthirsty as later films, but plenty of tension.

The characters are surprisingly complex. Mr. Pendrel is excellent. His mild sarcastic nihilism has aged well.

Mr. Femm: "Mr. Penderel, I will give you a toast that you will not appreciate, being young. I give you illusion."
Mr. Penderel: "Illusion? Ha, I am precisely the right age for that toast, Mr. Femm."
Mr Femm: "Oh, I presume you are one of the gentlemen slightly, shall we say, battered by the war?"
Mr. Penderel: "Correct, Mr. Femm. War generation slightly soiled, a study in the bittersweet, the man with the twisted smile. And this, Mr. Femm, is exceedingly good gin."

Standard period-appropriate detective/cop noir-lite humour and the usual snappy dialogue. Pre-code, but nothing too scandalous. The villain wears a disguise even in their secret switch-throwing/victim observation room, which is a nice touch. Can't properly electrocute people unless you're dressed in a set of old silk drapes.

The Ninth Guest predates Agatha Christie's And Then There Were None and has a bit more social bite. There's a party (in a swank apartment, not a decrepit old mansion, but we'll let it slide). The guests (redolent with motives) are invited by a mysterious telegram. An elaborate deathtrap snaps shut. If you liked this film, check out The Exterminating Angel (1962), available through Criterion.

There seems to be some sort of ODH guest-based decay curve. We start with a Thirteenth Guest in 1932,  but by 1934, we're down to the Ninth Guest. Which one is the Missing Guest (1938)? By 1943 there's just The Ghost and the Guest left (presumably, an Unknown Guest). Who can solve this Mystery of the Thirteenth Guest? Wait just a few more years for in 1947, a Guest Is Coming; an Unexpected Guest. Can they solve it? No. Nobody can.

Look, I told you there were a lot of Old Dark House pictures!

Post-code, not particularly threatening, and churned out at a pace that makes a fun counterpoint to Barton Fink. The director (Robert F. Hill) made 16 films in 1936 (!) and two of them were ODH pictures. No soundtrack or ambient noise to fill the yawning gulfs in the pacing. It's not a good film, but it's useful as a benchmark (and a cautionary tale).

The best-known film version of one of the most popular mysteries of all time deserves a place on this list, for the sake of completeness if nothing else. A rival studio rushed out Fog Island, if you want a low-budget version of the same story with the serial numbers filed off.

The first film where the characters (at least a few of them) are genre aware. It's an Old Dark House theme party. Several elaborate plots, some highly questionable relationship dynamics, and an exterior set that doesn't match the interior at all. Also, a vat of acid.

Not a standard ODH picture (in that there's other locations involved and nobody's trapped), but well worth watching anyway. Cornelia Van Gorder isn't a hapless protagonist who faints at a death threat or three. When the film tosses her the idiot ball, she punctures it with a knitting needle and gets down to business. Everyone else panics (and/or dies); she plans. The 1930 version is good too, and has some very impressive camera work for the time. 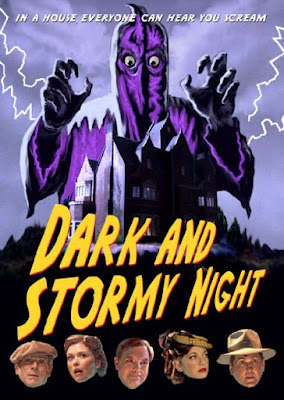 The final film on the list is a loving parody of the genre. Everyone clearly had fun making it, let alone writing the truly ridiculous dialogue. Skip the trailer and go straight to the film. With this film, the less you know the better.

Have I missed any black and white Old Dark House pictures that are worth watching? Don't bother listing them if you haven't seen them (there are other websites for that), but if you have, post a link in the comments.