The Massive Community Hexcrawl is finished. 42 different people contributed hexes and encounters. Starting from nothing (no prompts, no direction, no theme or direction), the hexcrawl grew organically into a post-apocalyptic science fantasy wastelandcrawl, the sort of thing you could use with Ultraviolet Grasslands, Acid Death Fantasy, or stick next to Expedition to the Barrier Peaks, or mash it up with my unofficial World of Rust bestiary. 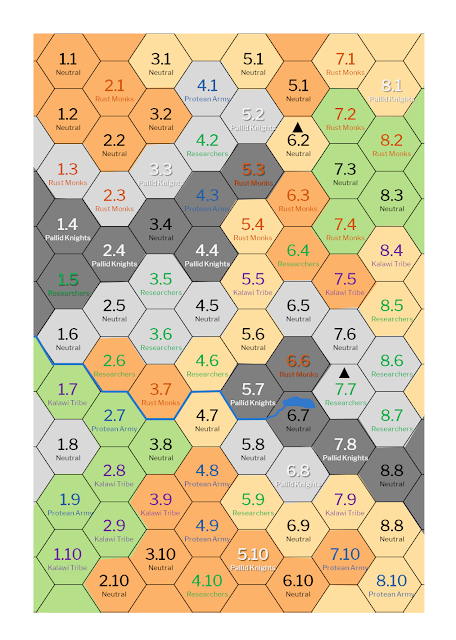 Final Notes
It was really interesting to see how the project developed. I tried to stick to a format that would avoid some of the worst issues with community projects and (despite the extended timescale), it worked. The main delays were on my end.

The strict character limits were usually followed, but some people either missed them or didn't care. I had to do a fair bit of editing and, in a few cases, ignore submissions that didn't really fit the theme or provide any added utility.

People tended not to submit encounters. It's strange that writing a hex is easier than writing a good random encounter, but not too surprising. I had to write a fair number of them.

The hex and encounter formats (first tested in the Veinscrawl) are as robust as ever.

Enjoy! And thanks again to everyone who contributed. The whole thing is licensed under CC-BY-NC 4.0. If anyone feels like making alternate maps, handy tools, or extra content, drop a link in the comments.