The wizards of Loxdon College have systematized magic. The world of enchantment is legible, via the paradigm below. 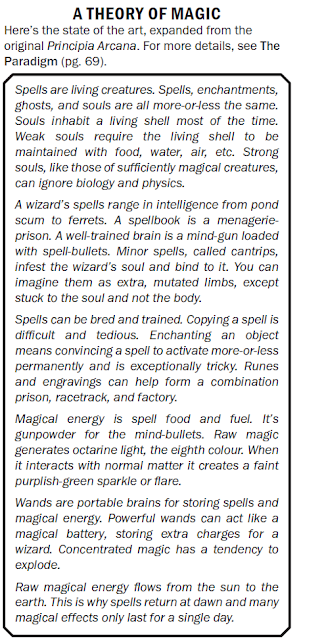 Like any decent paradigm, there are exceptions, and these exceptions keep theoretical wizards up at night. Since Endon is an industrial city, theoretical wizards are mostly ignored unless their discoveries are marketable. "Theoretical" does not nessesarily mean "stays indoors and reads all day" (though it often does), but indicates that the wizard in question does magic for knowledge, not for gain.

Geas-type spells are simple; a blob of spell-stuff attached to the target's soul, watching, waiting, ready to detach or detonate if certain conditions are met. A thaumic parasite, similar to a curse. The stronger the spell, the more difficult it is to disentangle without damage.  Some curses vanish into the target without a trace. There's no differentiation between the target's soul and the spell, and no possibility of disenchantment.

Some theoretical wizards believe that the soul contains echoes of its past forms, and can (under the right circumstances) undergo a sort of reversion or back-transformation.

No law forbids the study of divine magic, but tradition - and common sense - suggest that such research is unlikely to lead to a long and fruitful life. Putting a cleric in a prismatic centrifuge tends to attract divine wrath. The vague consensus is that the mighty soul-stuff of a great power is directly bonded to a chosen vessel's soul, or dispatches specially prepared spell-creatures at selected times. Some wizards believe clerics are merely delusional wizards.

Druids threaten to destroy towns, move forests, cause floods, or withold rain. Sometimes, but rarely immediately, the threatened effect occurs. It could be coincidence, but a magically induced coincidence is still worth studying. Some effects would require megathaums of energy to produce by conventional spells, yet the druids manage it without spectacle or side-effects. A series of small spells? A massive spell, so large and diffuse that it encompasses any ground-level observers?

The classic power word trio of stun, blind, and kill, are, to some wizards, the archetypal offensive spells. Power word stun is so simple and nonlethal that it's used as a sort of magical lab rat by experimental wizards.

Efforts to breed other power word spells always seem to fail. The lineages are remarkably stable. Minor changes in duration or effectiveness are noted, but they're well within general spellcasting tolerances. Fifty years ago, Marneus Cleept claimed to have created power word flame, but the only copy perished with him (and his tower). Power word pain attracted some attention until it was discovered to be a lightly modified power word stun.

Illusionists access the Mirror Dimensions through mirrors and octarine light. Reflective surfaces vary, but have included water, mercury, silver, gold, obsidian, and anything else that will hold a glossy finish.

Some theoretical wizards have noted that matter itself bends light. While observing the wandering stars pass behind the sun, the crystal spheres appeared to waver, as if observed through water. The same effect was noted on the edge of spheres of annihilation, particularly ancient and well-fed spheres. By carefully positioning eight spheres of annihilation (eight chosen more for tradition than mathematics) in a ring, it might be possible to bend a beam of light back on itself, creating a mirror-without-a-mirror. No one is sure what will happen, but it could create an unlimited source of raw magic, open a stable portal to the mirror realms, or turn time and space inside-out like a dusty pocket.

Bonus Content: 1d10 Ways To Get A Bunch Of People Into A Place When Only One Person Is Admitted

1. Portable Hole
The old classic. Sew it into the lining of your coat. Party climbs inside with a deck of cards, a few pig bladders full of spare air, and a lot of hope.

2. The Back Passage
A variant on 1. People check for portable holes, you see. So if you want to hide it, you’d better put it somewhere nobody wants to look.

3. Dream Key
A silver key on a chain. Antique, heavy. Insert it into a sleeping person’s ear, turn it, and climb into their dreams. All you need to do is time your exit, avoid detection, and avoid the (very real) dangers inside your friend’s head.

4. Waxenbeans
Eat them to turn into a tiny wax figure of yourself for 12 hours, give or take. Let’s hope the monks don’t discard material possessions before it wears off.

5. The Sigils of Conjoined Destiny
You’ll need two logs, scaffolding, rope, paint, and very trusting friends. Rig the logs up like they’re going to strike a bell, except the bell is you (all of you). Paint the sigils (carefully!) on the ends of the logs, ensuring they’ll collide at the correct alignment. Place your heads at the impact site. Release. For up to a week, or until someone catches on and unravels you, everyone hit by the hammer will be one person for the purposes of... everything. It’s difficult to say if you have one body or several bodies, because you’re also subject to the same entanglement.

7. The Lover’s Gate
One of those ridiculously forlkoric spells every hedge mage claims to know, but which most can’t cast. It’s an old spell, probably older than language. Calls a willing person to your side no matter where they are, provided you have mixed your blood with their blood (or the folkloric equivalent, if you get my drift). Has the baffling tendency to punch through wards, antimagic fields, glamours, and time itself, but only temporarily. The summoned person slowly feels themself drawn back to their origin. For the first few minutes, walking is easy. Then it feels like walking uphill. Then a run. Then a sprint. Then striving against a hurricane until they are torn away, tumbling, back to whence they came.

8. Living Tattoos
For two fat hogs and a barrel of red wine, there’s a man down Treacle Alley who will put you in a flask and tattoo you onto a person’s skin. You can run around in that warm flat world until someone draws you out with a lodestone. No refunds.

9. Dimensional Shivering
The Illusionists invented this once accidentally. You’ll need two full-length mirrors (and I do mean full length, unless you want to lose your feet), a source of octarine light, and ginger (for the nausea). Fold yourself flat. Your friend then rolls you up and slips you into a cigar or a belt. Unfolding yourself is a trickery process, requiring a quartz prism and octarine light (or, in a pinch, sunlight, though you’re likely to come out greyscale for a few weeks).

10. Thomas Contagion
Anyone who eats a piece of Thomas Infolded can, until their spiritual immune system kicks in, ingest other people, in the same manner as Thomas Infolded. Unless you can hover, you’ll also take on their mass and ailments. Imagine they’re standing on the soles of your feet, but upwards. When your body decides that this is wrong and kicks the interlopers out, expect a lot of mess and turmoil.