Here are a few of the 40k projects I've been working on.

Fire is a constant threat in any hive or voidship. At the banshee wail of a conflagration alarm, citizens rush to the scene, some to help (by custom, by altruism, from fear of punishment, or for the sensible fear that their own dwellings may be next), some to loot, and some to watch. In organized districts, ancient companies of Deconflagrators arrive to smother flames in toxic foam. Sheathed in coolant-suits, they stride into the fire to rescue citizens, vital documents, or relic-engines.

Some, corrupt or addled, set fires themselves, either to extort pump-tithes or from boredom. Some worship the Emperor Pyrolyzed in secret ceremonies. But most are hardy, true, and battle-scarred. Frostbite from coolant breaches fuse with blisters from combusting parchment and chem-stacks. Ears and fingertips go first. "A ten-finger jack" is their cant for novice, a "elbow-jack" for a veteran, as their skin all-over resembles the wrinked folds of an elbow.

Deconflagrators shun plasteel, synthrubber, and any material that melts with heat. Iron weave and ceramic are their allies. Some wear wax purity seals designed to burn and release prayers and healing incense. Some cast seals in precious tungsten.

Positions are hereditary, but deaths are exceedingly common, so foundlings and by-catches are frequently inducted and adopted. Moral hypnoconditioning drives many mad; criminals hoping to escape their past behind an anonymizing helm and a reputation for selfless deeds sometimes find their refuge worse than any prison. Hardened gangers and degenerate mutants still give the Deconflagrators a degree of respect. They care not from whence the fire sprang, only that it dies. 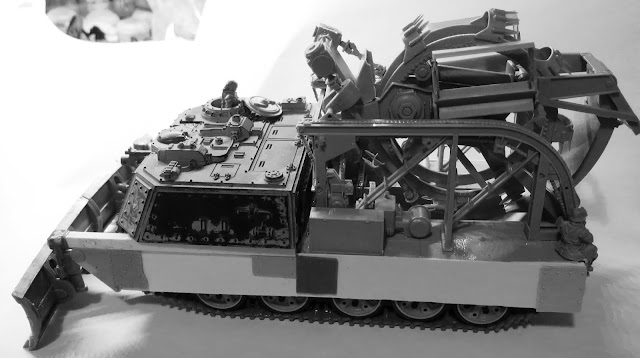 Designed to rapidly create a deep and sturdy trench, the Krieg-Pattern Mk. II Trenching Support Vehicle (sometimes known as a Bullock) is based on the ancient Land Crawler chassis. The tempermental machine spirit of the bucket-wheel excavator must be constantly propitiated by Enginseers and lay-brothers alike, giving the entire machine a shrine-like aura in the minds of many Krieg soldiers. 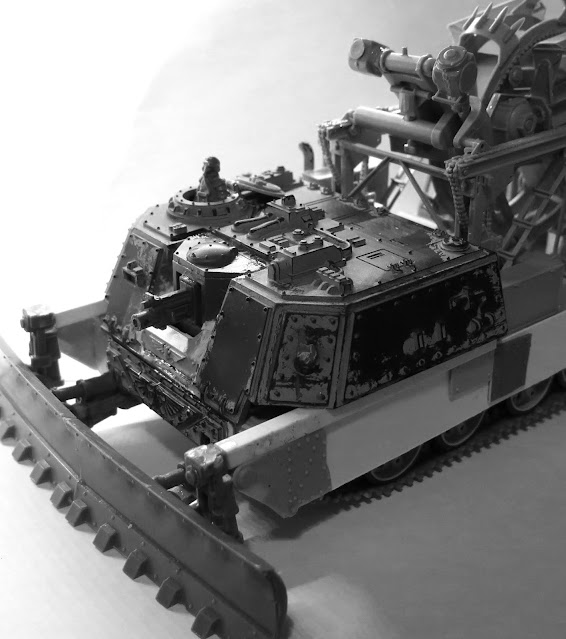 With a single front-mounted heavy bolter and minimal armour, the Krieg-Pattern Mk. II Trenching Support Vehicle is not designed for front-line combat.

Necromundan Sump Pirates do not exist. There is no law that specifies their non-existence (for any such law would have to refer, however obliquely, to the Sump Pirates), nor does it appear to be a custom or ancient rite. It is simply taken as a fact. Their appearance in an underhive settlement provokes bewildered panic, as if fairies and trolls had invaded the a modern Atheists conference. They can't be here. They can't exist. And yet, here they are, stealing your housewares and moveables, then clambering into the gloom. In their wake, explanations proliferate like fungi on a corpse. The survivors blame anyone but the Sump Pirates, who, of course, do not exist.

Sump Striders are the most common vehicles the Sump Pirates possess. Capable of climbing hive stacks, swimming through ash lakes or toxic ponds, or scuttling along buried roadways, these vehicles allow the Sump Pirates to raid anywhere in the hive. 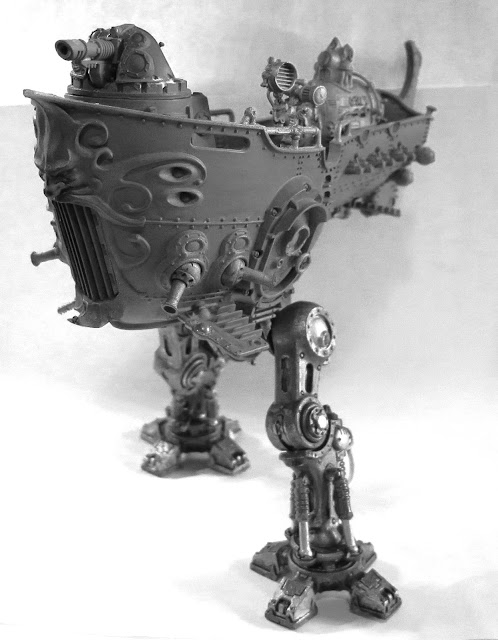 The enormous Sump Strider is the capital vessel of the Sump Pirates. Some burglars loot upper stories with ladder and rope. The Sump Strider provides a more direct method of horizontal wealth transfer.