OSR: Veins of the Earth, Session 2

Last session, the PCs entered the Veins of the Earth. They found sonic pigs, a giant spider, a very evil swineherd, a half-real village, salamander-people, and a place to rest.

The party consists of:

Cazael the spiderling fighter. Can produce 30' of rope a day; very useful underground.
The Paladin, a beetle-ling hermit, wanderer, and servant of the Authority.
Wonderwood Strongbow the Elf thief. Keeps a collection of unusual "things" in flasks.
Bill the wormling Orthodox Wizard. Has antlers and telekinesis thanks to strange potions.
Swainson, the hawkling Garden Wizard. Sensible and worried.
Klaus the human Barbarian. A hammer-wielding mercenary. Stoic and fatal about his new life underground.
Christen Bell the weasel-ling Bell Exorcist. Survivor of a doomed religious crusade.

In this session, everything went sideways. 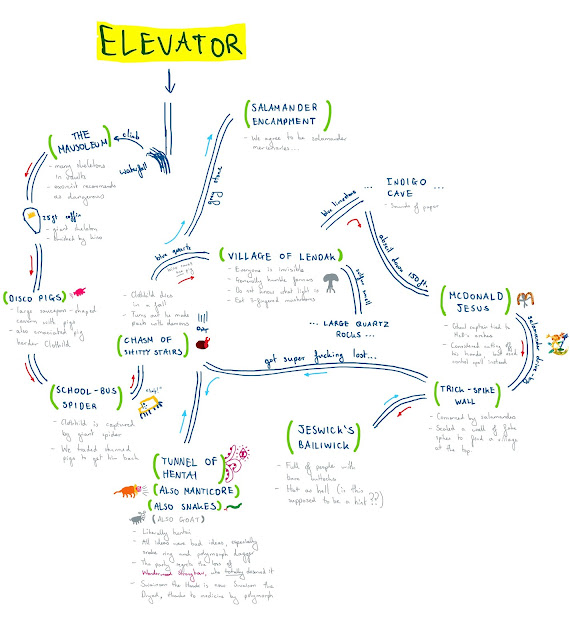 The Map: Session 2 of the Veinscrawl

1. The party leaves Christen Bell behind at Jeswick's fortress as a "diplomat", but more or less as a hostage. They accept a contract to retrieve as many escaped sonic pigs as possible.

2. After sneaking out of Olm territory, the party gets lost for several hours. Running very low on lamp oil, they find their way back to the same cave where Clothild, their swineherd guide, met his unfortunate end. The ground is still scarred with daemonic claw marks and drifts of ash.

3. Hearing noises down one of the side passages, the party explores a speleothem-filled cavern and blunders into 5 Ropers. These stalactite-mimics shoot strength-draining tentacles and try and draw weakened victims into their tooth-filled maws. Combat begins.

4. Cazael draws his ice sword. Spraying liquefied air everywhere and filling the cave with mist, he smashes one Roper to icy fragments. The Ropers drain strength from Swainson, Bill, and the Paladin.

5. Bill the Wizard hits a Roper with his dagger of roiling polymorph. The Roper transforms into a very confused goat. Everyone celebrates.

6. The Paladin commands another Roper to "EXPLODE", which it does. Cazael destroys a third roper, leaving just one (and a goat) remaining.

7. The goat transforms into a Manticore. Roiling polymorph, remember? Delighted, powerful, and malevolent, the Manticore shoots iron darts at everyone. Most party members are injured.

8. The surviving Roper entangles the Manticore.

9. Wonderwood the Elf uses the ring of serpents of the earth to summon a bunch of pissed-off stone snakes. Cave terrain becomes snakes. It's like being inside a bowl of spaghetti. The party, deeply unimpressed by how this encounter turned out, tries to flee.

10. Wonderwood is impaled by many iron darts and dies. All the dubious potions (vampire dust, zombie flesh, dried mind control mushrooms, etc.) smash and fall into the elf's wounds.

11. The Paladin suffers a Rapture attack.

He finds himself running forward into a shimmering landscape of amber glass. On the edge of a vast balcony, he looks out to see a waterfall of glass beads on silver wires, lit by reflected light. It is beautiful, alien, strange. His parents are there. Their face split wide, revealing a lamprey gullet full of daggers. Scream-laughing, they charge.

The Paladin has his current HP. His weapon (a sword). He also has a +8 to Save against "Mind Altering Effects".

Mind Altering Effects hadn't come up much during the game, but the Paladin's player always checked just to make sure his massive bonus didn't apply. Well now it finally does, and I ruled that it applied to everything. After all, this fight was inside the Paladin's mind. Where else could it possibly apply?

He demolished the Rapture and walked out of the shattered remnants of a crumbling dream.

And he's going to. "Be Not Afraid" is a command, not a suggestion.


12. The surviving party members, after a few failed attempts, manage to crawl to safety. During their escape, Swainson the wizard is hit by several darts and is near death. Bill "heals" her by stabbing her with the dagger of roiling polymorph turning her into a Dryad. Everyone, including Swainson, is pleased by this.

12. Bill realizes he has sleep prepared and could have cast it on the Manticore. He decides to sneak back and give it a try. He botches the spell, but doesn't know it. He sets the Manticore's waking condition to "true love's kiss."

13. Cazael sneaks back to try and find Wonderwood. He finds the elf. Wonderwood is now a pissed-off vampire covered in parasitic fungal growths, out for bloody revenge. The Manticore wakes up and fire iron darts... at Wonderwood. Cazael has time to flee.

14. The spiderling rejoins the party. Everyone runs as fast as they can back towards known territory.

15. The party gets lost again and finds their way to a series of finger-like warty caves. After a perilous descent, they are surrounded by Olm and offered work as mercenaries. The Olm are fighting a war with the Ghouls. The party negotiates a deal; three lumes (hours of light) for every Ghoul they kill. They think this is a great deal.

The Olm think it is a great deal too; it's 1/10th the market rate. Stupid surface-worlders.

16. The Olm also give the party Hec the Goblin to use as ghoul-bait. Hec has a sonic piglet, one shoe, and a mouth full of teeth. The party doesn't exactly trust the goblin, but they decided it's worth the risk. The Olm lead them to an isolated cave and allow them to get some rest.

Swainson, now a dryad, is worried about starving to death underground. Torchlight will not sustain a dryad.

Bill is worried someone kissed the Manticore.

Cazael is worried about Wonderwood, and particularly about her ring of serpents of the earth.

Hec is worried about being used as bait.

And everyone is worried about Klaus, who vanished at some point during the chaotic escape and hasn't been seen since.

Will the party survive another session in the Veins of the Earth?

Side Note: the dagger of roiling polymorph works like this. Make a normal attack roll. If you hit, the target Saves with a bonus equal to their HD. If they pass, nothing happens. If they fail, they are polymorphed into a random creature (from a worm to an elder red dragon). At the end of the next round, they Save again with a bonus equal to their original HD. If they pass, they stay in their new form for 24hrs. If they fail, they polymoph again, repeating the process. After 24hrs, they Save once again. If they pass, they've stabilized in their new form. No further Saves are needed. If they fail, the process starts over. Polymorphed creatures are stunned for one round. They are also fully healed.

The dagger has 3 charges remaining.
Posted by Skerples at 10:04