In the 12th century, Benjamin of Tudela traveled from his home in northern Spain to Baghdad and beyond. He followed pilgrimage and trade routes, visited scattered communities of Jews through the Mediterranean, and recorded where he visited.

People have a vague idea that medieval travel accounts painted a modern picture of the world, as if they were some sort of Lonely Planet guide. Benjamin's account is a perfect way to dispel this myth. He traveled along known routes, visited known cities, and described things covered by earlier travelogues, pilgrims guides, and classical texts. As we will see, the world he describes is far from complete.

For the purposes of this series I'm not concerned about Benjamin's motives, accuracy, or exact route. Instead, I'm going to use his text to show how a medieval traveler viewed the world, and how those descriptions can be used for fictional settings. Benjamin was an outsider everywhere he went. His itinerary is therefore much more interesting than a text from the same period written by a local. For the most part, I'm going to let the text speak for itself, but I will add links, images, and sidebars when I feel there's something more to discuss.

As far as I can tell, this is the best map of  his journey on the internet. That's terrible. I'm going to work on two maps. The first will be based on Martin Jan Månsson's Medieval Trade Networks map. The second will be a customized non-realistic map, based purely on Benjamin's descriptions and not on actual geography. Who knows; maybe I'll make a hexcrawl of it one day. He describes the world by days of travel, not by miles. I'll try to provide both.

The text is based on M. A. Alder's translation. Feel free to read ahead. I'd view his introduction with a skeptical eye. It hasn't aged well.

This the book of travels, which was compiled by Rabbi Benjamin, the son of Jonah, of the land of Navarre - his repose be in Paradise.

The said Rabbi Benjamin set forth from Tudela, his native city, and passed through many remote countries, as is related in his book. In every place which he entered, he made a record of all that he saw, or was told of by trustworthy persons - matters not previously heard of in the land of Sepharad. Also he mentions some of the sages and illustrious men residing in each place. He brought this book with him on his return to the country of Castile, in the year 4933 (C.E. 1173). The said Rabbi Benjamin is a wise and understanding man, learned in the Law and the Halacha, and wherever we have tested his statements we have found them accurate, true to fact and consistent; for he is a trustworthy man.

The "land of Sepharad" is the "land of Spain", as named by medieval Jews, based on a very obscure biblical reference.

His book commences as follows: - I journeyed first from my native town to the city of Saragossa, and thence by way of the River Ebro to Tortosa. 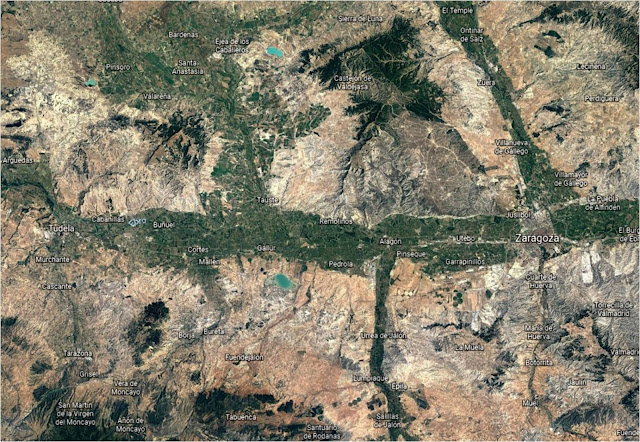 From there I went a journey of two days to the ancient city of Tarragona with its Cyclopean and Greek buildings. The like thereof is not found among any of the buildings in the country of Sepharad. It is situated by the sea, and two days' journey from the city of Barcelona, where there is a holy congregation, including sages, wise and illustrious men, such as R. Shesheth, R. Shealtiel, R. Solomon, and R. Abraham, son of Chisdai. This is a small city and beautiful, lying upon the sea-coast. Merchants come thither from all quarters with their wares, from Greece, from Pisa, Genoa, Sicily, Alexandria in Egypt, Palestine, Africa and all its coasts.

The "Cyclopean" buildings at Tarragona are massive walls of boulders, built by bronze age architects two and a half thousand years before Benjamin visited them. We do not know if Benjamin, like many people of his age, thought the walls were actually built by the one-eyed cannibal Cyclopes.

Thence it is a day and a half to Gerona, in which there is a small congregation of Jews. A three days' journey takes one to Narbonne, which is a city pre-eminent for learning; thence the Torah goes forth to all countries. Sages, and great and illustrious men abide here. At their head is R. Kalonymos, the son of the great and illustrious R. Todros of the seed of David, whose pedigree is established. He possesses hereditaments and lands given him by the ruler of the city, of which no man can forcibly dispossess him. Prominent in the community is R Abraham, head of the Academy: also R. Machir and R. Judah, and many other distinguished scholars. At the present day 300 Jews are there.

Despite being on the coast, it seems Benjamin traveled overland. Sea journeys, even short ones, were perilous adventures.


Thence it is four parasangs to the city of Beziers, where there is a congregation of learned men. At their head is R. Solomon Chalafta, R Joseph, and R. Nethanel. Thence it is two days to Har Gaash which is called Montpellier. This is a place well situated for commerce. It is about a parasang from the sea, and men come for business there from all quarters, from Edom, Ishmael, the land of Algarve, Lombardy, the dominion of Rome the Great, from all the land of Egypt, Palestine, Greece, France, Asia and England. People of all nations are found there doing business through the medium of the Genoese and Pisans. In the city there are scholars of great eminence, at their head being R. Reuben, son of Todros, R. Nathan, son of Zechariah, and R. Samuel, their chief rabbi, also R. Solomon and R. Mordecai. They have among them houses of learning devoted to the study of the Talmud. Among the community are men both rich and charitable, who lend a helping hand to all that come to them.

The parasang is a frustratingly variable unit that changes based on local terrain. M. A. Alder equates a parasang to 3.4 miles, and states that 10 parasangs make a day's journey. Therefore, 4 parasangs = 13.6 miles. The actual distance, on modern roads, is 22 miles. 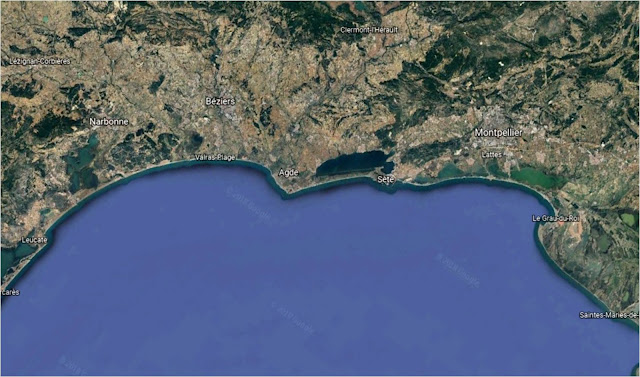 From Montpellier it is four parasangs to Lunel, in which there is a congregation of Israelites, who study the Law day and night. Here lived Rabbenu Meshullam the great rabbi, since deceased, and his five sons, who are wise, great and wealthy, namely: R. Joseph, R. Isaac, R. Jacob, R. Aaron, and R. Asher, the recluse, who dwells apart from the world; he pores over his books day and night, fasts periodically and abstains from all meat. He is a great scholar of the Talmud. At Lunel live also their brother-in-law R. Moses, the chief rabbi, R. Samuel the elder, R. Ulsarnu, R. Solomon Hacohen, and R. Judah the Physician, the son of Tibbon, the Sephardi. The students that come from distant lands to learn the Law are taught, boarded, lodged and clothed by the congregation, so long as they attend the house of study. The community has wise, understanding and saintly men of great benevolence, who lend a helping hand to all their brethren both far and near. The congregation consists of about 300 Jews - may the Lord preserve them.

From there it is two parasangs to Posquières, which is a large place containing about forty Jews, with an Academy under the auspices of the great Rabbi, R. Abraham, son of David, of blessed memory, an energetic and wise man, great as a talmudical authority. People come to him from a distance to learn the Law at his lips, and they find rest in his house, and he teaches them. Of those who are without means he also pays the expenses, for he is very rich. The munificent R. Joseph, son of Menachem, also dwells here, and R. Benveniste, R. Benjamin, R. Abraham and R. Isaac, son of R. Meir of blessed memory. Thence it is four parasangs to the suburb Bourg de St. Gilles, in which place there are about a hundred Jews. Wise men abide there; at their head being R. Isaac, son of Jacob, R. Abraham, son of Judah, R. Eleazar, R. Jacob, R. Isaac, R. Moses and R. Jacob, son of rabbi Levi of blessed memory. This is a place of pilgrimage of the Gentiles who come hither from the ends of the earth. It is only three miles from the sea, and is situated upon the great River Rhone, which flows through the whole land of Provence. Here dwells the illustrious R. Abba Mari, son of the late R. Isaac; he is the bailiff of Count Raymond.

There are a lot of prestigious names here. I've tried to link to most of them. Benjamin was clearly proud of the people he visited, and with good reason. The relics of St. Giles were a major pilgrimage destination. The saint was "the speediest of all the saints to help the unfortunate and afflicted. The author [of the pilgrim guide] himself had seen a prayer answered on the very same day. The most vivid sculpture in Provence still displays the generous gratitude with which the pilgrims of the 12th century rewarded St. Giles for his aid." (Popular Religion in the Middle Ages, Brooke)


Thence it is three parasangs to the city of Arles, which has about 200 Israelites, at their head being R. Moses, R. Tobias, R. Isaiah, R. Solomon, the chief rabbi R. Nathan, and R. Abba Mari, since deceased.

From there it is two days' journey to Marseilles, which is a city of princely and wise citizens, possessing two congregations with about 300 Jews. One congregation dwells below on the shore by the sea, the other is in the castle above. They form a great academy of learned men, amongst them being R. Simeon, R. Solomon, R. Isaac, son of Abba Mari, R. Simeon, son of Antoli, and R. Jacob his brother; also R. Libero. These persons are at the head of the upper academy. At the head of the congregation below are R. Jacob Purpis, a wealthy man, and R. Abraham, son of R. Meir, his son-in-law, and R. Isaac, son of the late R. Meir. It is a very busy city upon the sea-coast. 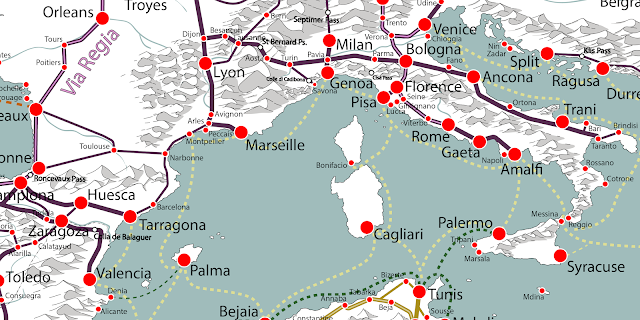 Tuleda is just barely visible on the left side of the map. All of Benjamin's other major destinations are marked.

This map uses only Benjamin's descriptions. If a city is listed as being on the coast, it's on the coast. If not, it's not. Small squares for towns, big squares for cities, books for centres of learning, coins for trading cities, walls and castles where mentioned.

From Tortosa, where Benjamin starts tracking his travel time, he traveled 433 miles / 703km to reach Marseilles. Estimated travel time in total is just over 14 days, presumably with long breaks. His average rate of travel is 40 miles / 60 km a day. He writes of:
-mythical prehistoric ruins
-a commercial city with every major power represented
-a learned vegetarian recluse
-the relics of a quick-acting healing saint
- a great river
-an outsider who serves as the bailiff of a count

In Part 2, Benjamin reaches Rome, and his itinerary begins to include unlikely, mythological, and fantastic elements.