Continued from here. In which the party buys more things, fights goblins, flees from goblins,, encounters a very strange lion (but no witches or wardrobes), and makes poor decisions.

There are also illustrations.

A nameless human Paladin of the Voice. Very faithful, very dumb. Recently swindled out of his share of the loot by Antonia and Franklin.
Franklin, the Iron Frog. A frogling knight and master of the feudal hierarchy. Ambitious, tending to unscrupulous.
Antonia Barracuda, a fishling thief and a wizard of dubious training. Owner of an inn.
Fergus the goatling. A biomancer disguised as an orthodox wizard. Has shady plans.
Annie, an antling Wizard of the White Hand. Now richer than her entire colony.

The party spent another three days in the city of Elderstone. Fergus bought a vial of "Love Potion #8" from Lur the Enchanter and promised not to use it for anything illegal. He also bought three discount unlabeled wands, tied them to a broom handle with twine, and made a sort of wand-gatling-gun-thing. Annie was aghast at his reckless behavior.

Franklin, meanwhile, had recruited an old soldier to serve as the group's butler, quartermaster, and servant-wrangler. Humbolt's back had been broken in combat, and he walked almost bent in half, but his eye was as keen as ever.

Antonia decided to rename her Inn from the "Crooked Stool" to "AT1LI" or "Atili" or "Antonia's Totally 100% Legitimate Inn". She also invested funds in hiring more staff, cleaning the building, and starting construction of a small bakery (with license from the Bakers Guild) to produce specialty breads, made with rare spices her vast wealth allowed her to purchase. The ovens wouldn't be ready for months, but when they were complete, the Inn would smell like freshly baked bread every morning.

The Paladin spent his time buying a wagon-load of goods, including several crates full of sealed vials of holy water, blessed just for him by the Bishop of Elderstone, in return for another generous donation. The party left Elderstone in a shambling caravan, with six wagons, five cows, two hired herdsmen, a box full of chickens, barrels of supplies, and a priest. The Paladin was worried about the spiritual health of the growing community, so he'd asked the Bishop to send an experienced, dutiful, and sober priest. The best the Bishop could offer was a newly ordained priest named Alan who seemed both harmless and entirely unprepared for a journey into the unmapped hills near Bogrest. The Paladin assured him everything would be fine.

Animals:
5 cows, 12 chickens, and at least 5 horses. Could be more. Antonia also has a falcon and a dog.


Castle of the Serpent Kings 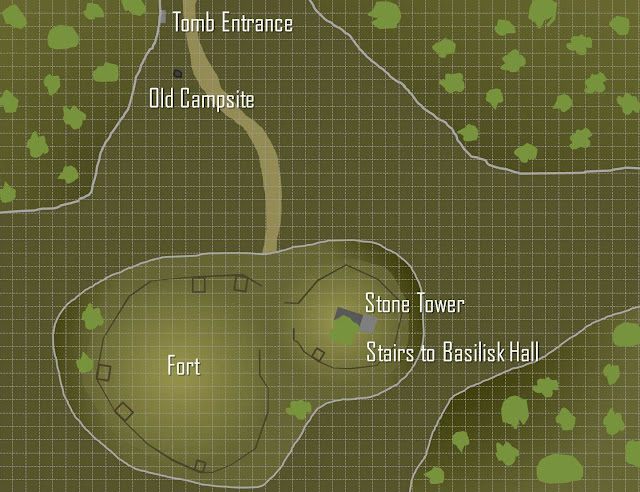 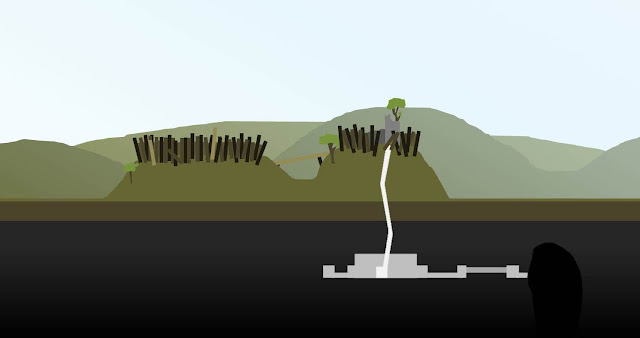 This is how the old hill fort looked before the PCs arrived. Squares are ~10'. The side view shows the stairs down to the tomb complex and the chasm. 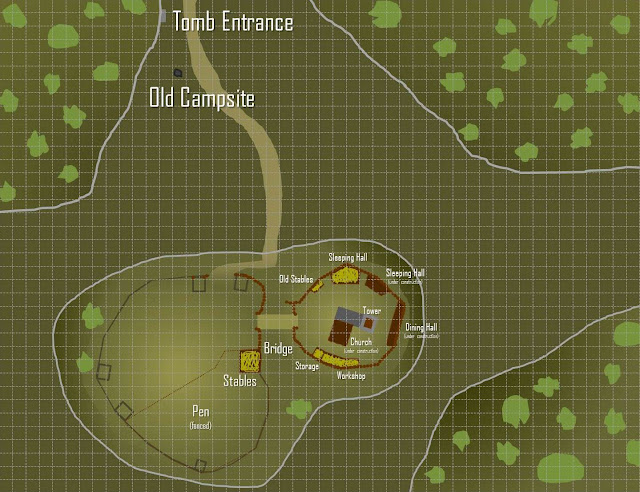 And this is how it looks now. The Four Daves, assisted by the soldiers, cleared the old rotting walls, built new ones, and constructed a few buildings. Lacking masons and tools, the repairs to the stone tower and side-building were made with wood.

The structure and scale of the site is based on Mountfitchet Castle in Essex.

After unpacking their purchases and seeing to their new hirelings, the party descended into the Tomb once more. They fed the Basilisk a quarter of a cow to keep him happy and quiet, then continued exploring. The goblins were their main objective. With four hired soldiers, they crept through the rotating cylinder-door and into the goblin lair. The stone was warped by the light of Spackle's botched spell, but otherwise, the caves were little changed. The floor was still boot-deep in muck and debris, the roof was still very low, and the goblins were still present. After discovering the hideous goblin spawning pit and disturbing 14 goblins, the party fled in disarray. The Paladin commanded the stone walls of the cave to "BLOCK THE PATH", and they sealed behind the part without a seam, trapping the goblins in their cave and allowing for an orderly retreat.

Back on the surface, the party debated their next move, and decided to explore the Chasm.

Here's a map of the party's route so far. 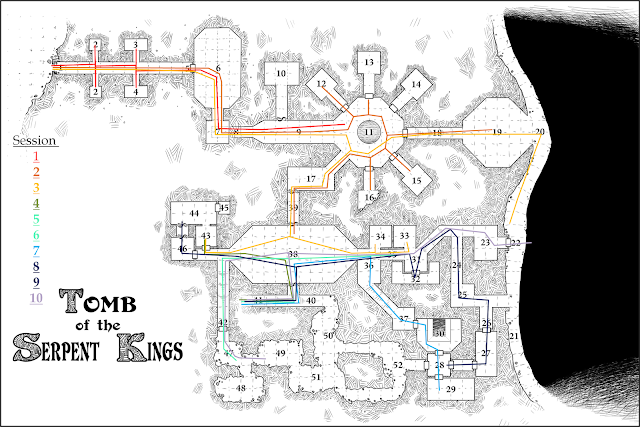 Franklin had noted a few very narrow stone stairs leading down the chasm during an earlier expedition. Deciding that their hirelings would be a liability, Franklin asked them to stay behind, but demanded the two wizards follow him, Antonia, and the Paladin. He lead the party down one set, moving very cautiously. On one side, a bottomless drop. On the other, cold wet stone, and 2' wide stairs. The party found a landing 50' down and stopped.

Antonia cautiously examined the iron doors that lead into the side of the chasm. They were once locked by a huge iron and silver padlock, but time and water had turned it into a lump of rust. The Paladin's sword made short work of it, and, with torches raised high, the party entered the chamber.

The initial rooms were empty save for dust, and appeared to have been carved with a skilled hand. The next few rooms were much less tidy, and appeared to have been scraped or worn by natural processes. There were long gouges in the floor and tiny pockmarks, and the walls were a chalky white stone, veined with salt. The PCs came across the corpse of a desiccated snake-man warrior in one of the maze-like passages. While searching the body, a huge dandelion seed made of glass drifted into the room, creaking slightly in the still salt-tinged air. The party carefully avoided it and then smashed it to pieces. Fergus picked through the debris to find a bean-like seed kernel.

"Tastes like wood," he said, sucking on it. The rest of the party looked at  him with various expressions of dismay.

"Anyway, we should gooooshit another one!" Franklin shouted, as a second seed descended on the group from above. Rather than swat it around the party fled, the Paladin taking a lead. Fergus, meanwhile, stuck one finger in his ear and twisted, as if trying to dislodge a bit of sand.

"Does anyone else here that sound? It's like a steel needle on glass," Fergus said, as the party backtracked. Nobody else did, but they were all preoccupied with their own fears. The Paladin spotted a strange shape in the passage ahead, between the party and the exit. It looked like an emaciated white lion, but with a silver-glass mane and no visible eyes or head. He raised his shield and the lion-thing charged.

The party couldn't get around the lion easily as it attacked their friend, but they did try to swat it away. The creature's claws dripped corrosive liquid that burned through the Paladin's armour, failing to scorch his flesh but tearing his newly purchased plate armour to ribbons. Antonia shot the creature with a crossbow but failed to harm it. Annie stood back, jabbing it a few times with her dagger.

Fergus, in a fit of brilliance, used his extract venom spell to draw the corrosive liquid from the creature's claws. It was now merely savaging the Paladin with its claws and glass-spike mane, rather than sizzling solvent. In a fit of utter stupidity, Fergus extracted the liquid into his own palm. The goatling wizard screamed and fell backwards, clutching the stump of his arm, and throwing droplets of blood and solvent everywhere.

GM's Note: This wasn't for lack of trying. He's earlier asked another player about borrowing a bottle, but insisted, during the fight, that he'd only asked, and hadn't taken a flask. His plan was to run over, ask for the flask, and then tip the liquid in.

Meanwhile, the party had managed to finish off the creature. The Paladin's face and neck were covered in glass splinters and his back and arms were deeply gouged. Despite this, the Paladin remained cheerful, and hauled the corpse of the lion to the surface himself. The rest of the party assisted Fergus, who was in shock at the loss of his hand and refused to stop screaming.

While the Paladin had his wounds examined, Franklin and Antonia examined the corpse of the lion-creature, and determined it was  "weird as hell, and probably bad news." Their hirelings agreed. Antonia wanted to burn the entire thing, but the Paladin insisted on having it skinned and made into a cape. Franklin considered sending the head as a present to Baron Bayle, but the hideous emaciated jaws and blood-soaked glass mane made poor display pieces, and Antonia was worried about the chance of some sort of contagion spreading from the corpse.


While the rest of the group debated, Annie and Fergus stole the skinned lion (via a wheelbarrow; the skinning job was not particularly neat) and bumped their way alone into the dungeon. They went straight for the mysterious treasure-chamber near the sacrifice pit. The chamber contained a huge statue with gold scales; one side weighing a heart of gold, the other stained with ancient blood. The last time Fergus had meddled with the statue it had shot eye-beams at him. This time, he was prepared. He took one of the palm-sized mirrors the party had found in the tomb's throne room and held it with his one remaining hand, fully prepared to deflect any eye-beams should his cunning plan fail. Annie, with considerably trepidation, tossed the lion corpse at the scales and ran.

The oozing corpse hit the scales and jostled them. The statue, with cold indifference, fired its eye-beams. Fergus held up his mirror... but the eye-beams struck him in the head, vaporizing the hapless wizard from the eyebrows up. Annie ran in and tried to drag him away but accidentally set off one of the fire traps, further burning the goatling. Sighing and regretting her involvement in Fergus' scheme, she tossed his smouldering corpse in the wheelbarrow and hauled him to the surface.

The Tomb of the Serpent Kings had claimed yet another victim. Who would be next? What strange riches lay and unknown monsters lay further down the chasm? And would the Paladin pose nude in his new lion cloak like an ancient hero or use it as a rug? Find out next time because I have absolutely no idea.
Posted by Skerples at 23:03