I started a community hexcrawl on Patreon. Since it seems every interested Patron has contributed, I've decided to open the project to everyone. Hear ye, hear ye, get your hexes in before it's too late. 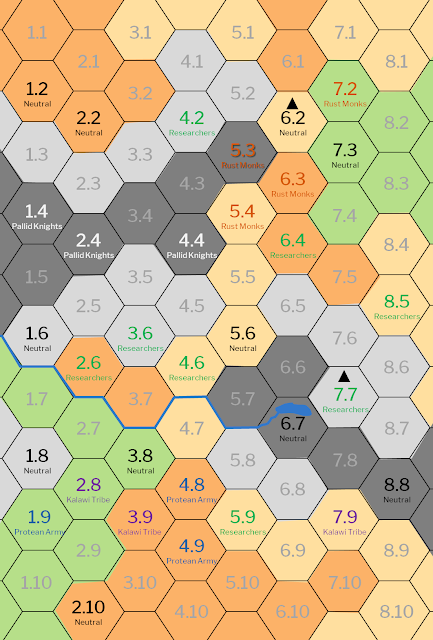 I really like the land that's slowly emerging. The high, star-blasted peaks of the Barren Fells, the slab-sided slopes of the Bluffs, the oozing Wastes, the desolate Badlands, and the contentious and turbulent Savannah. The mysterious Researchers, the aloof Rust Monks, the dead Pallid Knights, the mutated Protean Army, and the mysterious Kalawi Tribe. Wurms, golems, psychic elephants, and stranger things besides. Like Arnold's Centerra, there might be weird stuff everywhere but the world is still a real place with real people experiencing real problems. The setting feels like it could be bolted on to the Ultraviolet Grasslands, Dying Earth, or other similar settings without too much trouble. It's similar to Gus L.'s Dread Machine, but more factional and much larger. You could stick some of the Trilemma adventures or White Plume Mountain in here too.

Please avoid direct pop culture references. I reserve the right to edit all submissions (or ignore them). All text will be licensed under CC-BY-NC.

Post a comment with one hex and one encounter. You can submit multiple hexes and encounters in separate comments, but I'll try to give everyone a chance before looping back to the same authors. There are a surprising number of hexes to fill, but it's still first-come, first-serve.

Factions and terrain types are briefly described in the PDF. Hexes take 6hrs to cross. They could be twenty miles of flat open ground or one mile of trackless wilderness. Don't worry about scale, worry about density of gameable content. Try as hard as you can to make every word or phrase capable of supporting an interesting session.

Sticking to a very strict, very brief format makes collating material much easier. I sometimes need to trim a word or polish a phrase, but it's a lot easier than open-ended bestiaries.

Short character limits inspire creativity. It's easy to get an idea across in a long blog post, but can you write a snappy, evocative, and useful sentence? It encourages people to focus on the essentials.

It's essential that the project's coordinator maintain motivation and drive. If they stop caring, the whole thing falls off the radar. Handing the project off to someone else leads to more problems, even if a style guide and copious notes are provided.

Concerns / Problems
The broader the project's scope, the more likely similar ideas will appear. Terrain types and factions were entirely crowdsourced, and tended towards aesthetics of ruin immediately. Idea reinforced idea. This is great (because the hexcrawl feels very cohesive), but it did lock the project in a specific direction.

After an initial burst of enthusiasm, interest in a project rapidly fades. It's tricky to keep the flow of submissions going. The coordinator can fill in blanks if needed.

There's no easy solution, and a solution may not be necessary. These are just things to keep in mind.