The first public round of this community project went well, but there are still a few hexes remaining! Let's make a hexcrawl! 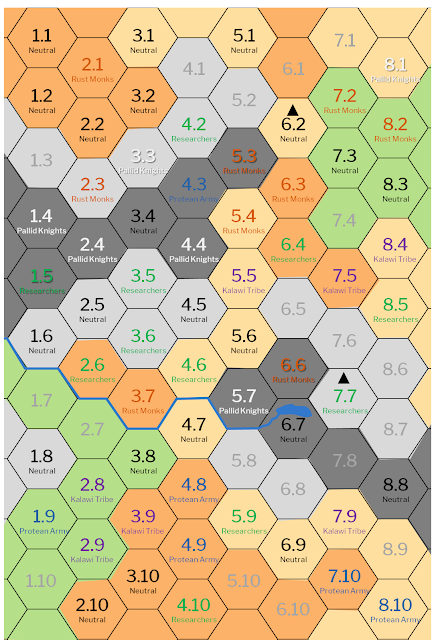 The unnamed land in this hexcrawl is desolate, strange, and enticing. The high, star-blasted peaks of the Barren Fells, the slab-sided slopes of the Bluffs, the oozing Wastes, the desolate Badlands, and the contentious and turbulent Savannah. The mysterious Researchers, the aloof Rust Monks, the dead Pallid Knights, the mutated Protean Army, and the mysterious Kalawi Tribe. We still don't really know much about the factions or why they are present in this region. Perhaps that's for the best.

Wurms, golems, psychic elephants, and stranger things besides lurk around every corner. Like Arnold's Centerra, there might be weird stuff everywhere but the world is still a real place with real people experiencing real problems. The setting feels like it could be bolted on to the Ultraviolet Grasslands, Acid Death Fantasy, Dying Earth, or other similar settings without too much trouble. It's similar to Gus L.'s Dread Machine, but more factional and much larger. You could stick some of the Trilemma adventures or White Plume Mountain in here too.

Please avoid direct pop culture references. I reserve the right to edit all submissions (or ignore them). All text will be licensed under CC-BY-NC.

There are just 17 hexes available:

Post a comment with one hex and one encounter. You can submit multiple hexes and encounters in separate comments, but I'll try to give everyone a chance before looping back to the same authors. First come, first serve.

Factions and terrain types are briefly described in the PDF. Hexes take 6hrs to cross. They could be twenty miles of flat open ground or one mile of trackless wilderness. Don't worry about scale, worry about density of gameable content. Try as hard as you can to make every word or phrase capable of supporting an interesting session.

If possible, encounters should be related to the landform, not the specific hex.