Ultraviolet Grasslands, or, to give its full title, UVG and the Black City - Psychedelic Metal Roleplaying, is a setting book by Luka Rejec.

You can - and should - buy it here or here. There's a free introductory version here. 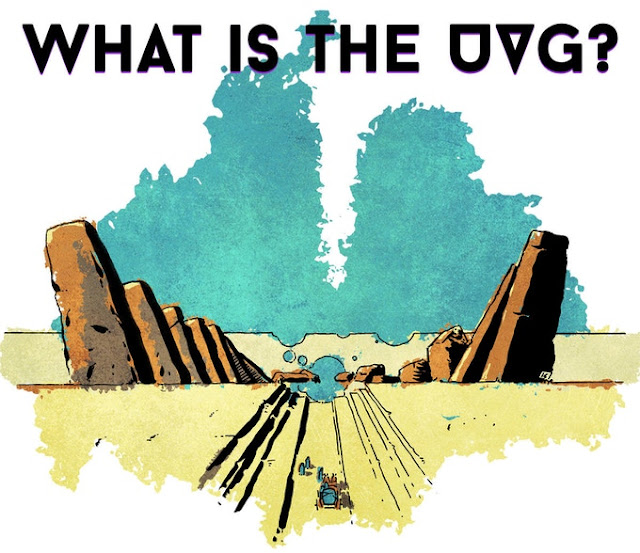 Full Disclosure
Luka did the art for Kidnap the Archpriest and Magical Industrial Revolution, and has generally been good to work with. I was hired to do a high-level review and structural commentary on Ultraviolet Grasslands. This review has an enormous positive bias.

Because I'm fussy, peevish, and peculiar, this review also has an enormous negative bias. I usually review books by listing problems or issues and then saying "but it's still very good." This review is no different. You've been warned.

I also haven't playtested the book. I've seen people run it and it seems to work pretty well.


'People of the Earth can you hear me?'
Came a voice from the sky on that magical night
-Billy Thorpe - Children Of The Sun

Ultraviolet Grasslands is a setting book, pointcrawl, toolkit, artbook, and set of liner notes to an imaginary compilation album. Sir John Mandeville under the influence of heavy metal. The result of giving the people at Burning Man access to terraforming equipment.

Should I Buy This Even Book If I Think Blue Oyster Cult and The Blue Man Group Are The Same Band?

First, because it's beautiful.
Second, because it works. It's a gamebook, not a novel or a tasteful heap of prose. It is a finely crafted tool to create stories.
Third, because it's well written. Concise, sharp, dense, and flavourful.
And fourth, because it's cheap. According to my calculations a book with 220 pieces of full colour Luka Rejec art should cost [stack overflow error], not including text. $25 for a PDF is a bargain.

I realized I was approaching this book with the wrong mindset. It's a proper setting guide, not some bolt-on fits-your-assumptions setting guide. It's closer to taking up Warhammer 40k or Glorantha. Trying to figure out how to make UVG work with an existing paradigm is like bolting Warhammer 40k onto a Spelljammer game and hoping the tone will match.

UVG demands to be run. And it's very likely to get what it wants

There's a temptation among very clever authors and game designers to create perfect linear museums or galleries. The transmission process from author to GM and from GM to players is messy. Important details will be lost. Themes will be mangled, distorted, and simplified. Creating a guided tour through the author's masterwork prevents GMs and players from rubbing their cheeto-stained fingers on the art.

It's a problem. And it's a problem UVG does not have. This book is designed to be used. Exploration is encouraged because it's excellent, not because it meets some arbitrary mechanical or structural requirement. Nothing is mandatory. Everything is permissible.

Power is great. Given the choice between a 1d4+1 dagger and a 2d20+1 dagger that also sets the user on fire and can't be held by mere flesh, I'll include the 2nd option every time. Sure, it's "overpowered", but it's interesting. Great games come from giving the players power and seeing what they do with it. Grab the tiger by the tail.

Give the players a nuclear reactor and some enemies. Give them a barely steerable hoverobelisk. Let them go slightly mad with power; power won't save them.

Dense and chewy are the grasslands. Aesthetics of ruin? In great heaping strata.


It is so far into the future that everything that [redacted] made possible has happened three times, even world harmony.
-Ra

Beneath the caravan-trading-exploration system, there's a settlement-kingdom system. Treasure is often thrones or nation-forges. Settle down, claim some territory, collect some tolls, build some statues, wage a catastrophic war, add another layer of debris to the grasslands.

I'm not a system person. Mechanics and tools yes, but systems are full of moving parts. Figuring out how they work without extensive testing is tricky.

System-specific rules (i.e. the stuff you'd replace if you ran UVG using B/X or the GLOG or whatever) take up ~8 pages. The rest is tools you can use in most systems.

There's a Paradigm. I like paradigms. More books should explain their core assumptions; it makes improvisation much easier.

The caravan rules are sublimely elegant and, critically, include brilliant tools. As I was reading the book, I found the next page answered the question I about the previous page. "What if the players set up a recurring trade route under an NPC?" [flips page] "Oh, here's a handy and hilarious table."

If you want to learn about the SEACAT system, Luka's written some blogposts.

Information Loading
UVG is not an easy book to process. There's a lot of "hidden" information; even with the index, glossary, and search tools the onus is still on the reader to put together some patterns.

Reading the book linearly is probably suboptimal. I'd suggest:

Weak Discoveries, Strong Discovery.
The weakest locations in a hexcrawl are pointcrawl are purely descriptive.


GM: You encounter the Obelisk of Grune. It is an inert stone 20' tall.
Players: Neat. We move on.

Second weakest are locations that are purely descriptive but have hidden information with no way for the players to access this information.

GM: You encounter the Obelisk of Grune. It is an inert stone 20' tall.
Book: The Obelisk of Grune produces gallons of pure gold if the blood of an albino duck is rubbed on its surface. The only person who knows this is Sir Alfred Mooseblaster, who died 300 years ago on another continent.
Players: Neat. We move on.
GM: Not going to... oh, I don't know, rub some duck blood on it?
Players: Why would we do that?

Ultraviolet Grasslands has a few of both types of locations. I do mean a few; probably no more than 5 or 6 in the whole book. But they still exist. Cool ideas without hooks ("Why should we care? What can we do with this?") or with hidden information ("How in the world would we have figured that out?")

Coming up with a cool idea is not enough. Without a way to interact with the idea, it's just some words for the GM to say. Nobody comes to game night just to hear the GM talk.

Map Snarl
I didn't follow UVG's development closely, but it seems like one region was completed before some of the others, then retrofitted into the larger structure. The Glass Bridge - Three Sticks region is a mess. There is a mini-map, but it's cut into 3 sections spread across several pages and, more importantly, it doesn't match the main map.
It feels like the minimap came first, full of cool names and neat locations, and the pointcrawl format came later. It's got too many locations in too small of an area and some of the locations are just... dull. Location 17 is a tethered moon. And here, in location 18, there's a whole paragraph about a boring river. Seriously, the text says "There is not much to say about this river."

That's probably a sign to cut the river or fold it into a table. Things shouldn't exist just because they're named on a minimap.

Unlike most of the other minor locations in the book, locations in this region have precisely defined locations, both in the map and in the text. This weakens the nebulous structure of pointcrawl exploration.

The section is 10 pages out of 200, it's still got some good information, and it's not too messy, but it's the weakest section of the book. An erratic boulder left behind when the great editing glaciers retreated. A minimap that was too good to prune.

The Weirdness Curve
I've got a slight preference to start the game a little less weird and let the strangeness build. The deeper you get into the grasslands, the weirder things become. But since you can rent animated skeletons with wheelbarrows from a serpent-tailed mind-controlling cat in the first 10 minutes of the first session, it's hard to ramp up the weirdness consistently. I'd possibly tone down the Violet City. It makes sense in-setting, but it'd make exploration payoffs easier.

I've created a GM-facing map. Most Discoveries are listed. Spoiler alert. Main locations are coded (bar for a wasteland-ish location, circle for an urban-ish location). Trade goods are in <brackets>. Some terrain around the Glass Bridge - Three Sticks region was moved around to make slightly more sense to me.

At this point, I can't think of any other tools I'd need to run a UVG game. I might make some quick reference sheets or generators, but I'd mostly need a personalized sheet of page numbers.

A revised version of the GM-facing map, with non-UVG locations added, will be available fairly soon.