Magical Industrial Revolution is now on sale via DriveThruRPG. 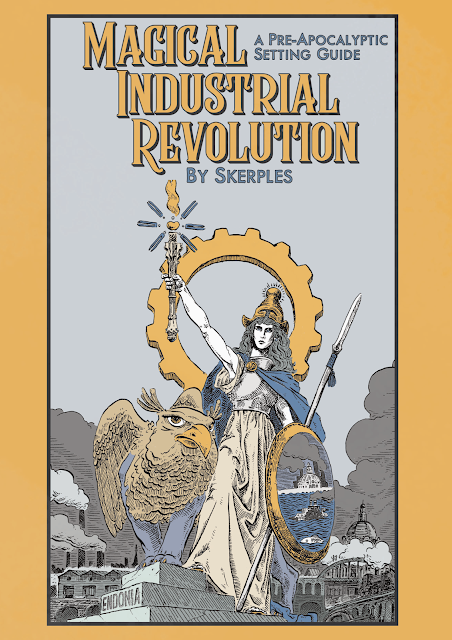 This book is about Atlantis before the tide turned. It’s about Hyperborea before it vanished between dimensions. It’s about Nu Yark Citee before the Mushroom Bombs hit.

It’s a setting guide to the greatest and most ambitious city in the world: Endon. It’s about a world slowly tipping onto its side, and all the interesting things that begin to slide at the start of a revolution. It’s about people with grand dreams pushing the boundaries of the possible, and the strange machines and devices they create along the way.

But mostly, it’s about magic. 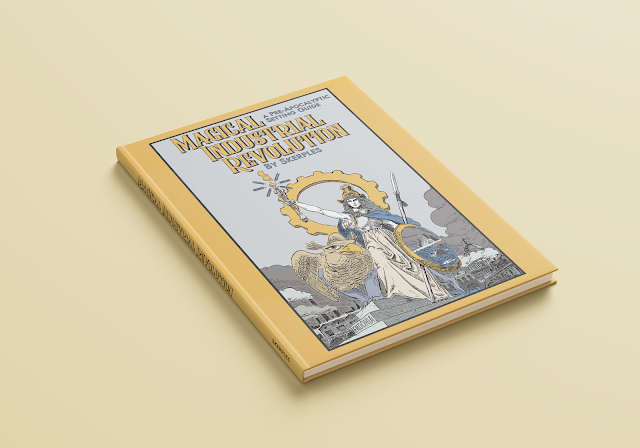 Here, I think Skerples hits the nail on the head for one of the most exciting core narratives for an RPG campaign can be: Revolution. Change.

Change, not so much in the way History has traditionally viewed it: with the rise and fall of Big People, with grand wars and grand empires, with technology emerging from the minds of great men like Athena from Zeus's skull and then suddenly just, like... being everywhere... But with how it alters and affects every day people, how they view and interact with the world. How it gradually and subtly worms its ways into our collective perceptions of Life.


Just wanted to say that the setting of this book didn't really interest me. I backed because Skerples always does great work. Upon receiving the pdf, I was surprised at how much stuff I was able to pull from it for my own setting, which hews closer to traditional sword & sorcery. Thanks so much for an amazing product.


I feel like I could keep rambling about this thing for much longer. It is PACKED with content, inspiration, philosophy, jokes, and songs. And every page has something fresh and inspiring.

Instead of memorizing a city block, I can pick 4-5 details from a few tables and mash them together into my own thing.

If you’ve been intimidated by cities in the past, I highly recommend checking out Magical Industrial Revolution. The book is glorious, clean, and filled with more magical nonsense than 100 other books.

It’s good. I can’t wait to use it in my own games.

A good deal of modular tables bring Endon to life – inhabitants, social and class structures, locations, spells, magic items, odd creatures – so you can apply it to a homebrew city and stoke your imagination in interesting directions. All of it is aimed at creating a place worth caring about. [...] The way the system manages innovations and their race to the apocalypse is pretty brilliant.

It's also just masterclass writing. It is so efficient and to the point, yet evocative. I truly believe this is the most important skill for RPG writing, which requires one to express game rules, setting, and ephemeral stuff like tone, often all simultaneously, and in a way the reader can comprehend. I'm yet to wrap my head around this skill, much to my own RPG writing detriment, so when I see it done well I deeply appreciate it.

Winner of the Questing Beast "Most Useful Game of 2020" award.

-Questing Beast
hey so I bought MIR and I would have done so sooner if it had been sold to me as 'imagine if Discworld went through the rest of the industrial revolution hinted at in the last few books, and it was awful'. I think it's one of the best TTRPG supplements I've ever read. I genuinely think it could have been a terrific licensed product if you'd gone down that route. It's certainly a better Discworld derivative product than The Watch. Anyway. Keeping making good shit. I'll probably keep buying it. Thanks!
-@K0G_uno

MIR is an interesting balance of ideas and urban mechanics, usefully presented. It is sufficiently modular that any pieces you wish can be removed and repurposed, and there is room for extra stuffing. I would take a look. 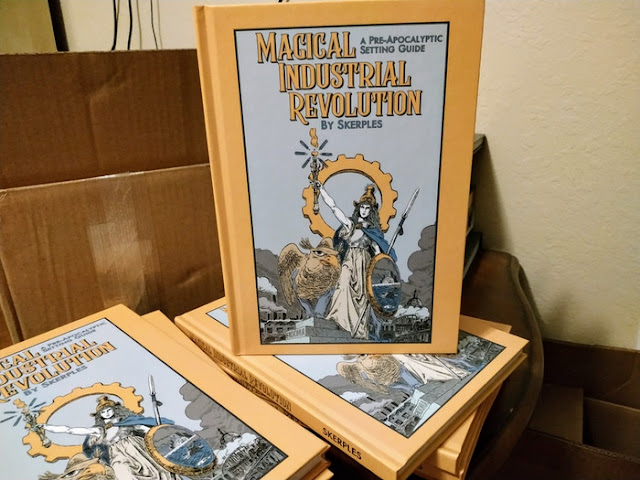 Cities and technology in RPGs often feel static. I wanted to write a book about a setting that changed as the game progressed in ways that the players could influence or manipulate. No fixed metaplot, no locked-in NPCs, just a big pile of useful tools, all designed to work in harmony. City tools, good magic items, fun encounters, and excellent ways to spend hard-earned cash.

I wanted to write a pre-apocalyptic setting. Most D&D-type settings assume there's a layer of magical ruin and decay below the current world; I wanted to write the explosion that could bury that layer. Gleeful, mad optimism instead of sullen and pragmatic pessimism. High magic, high ambition, disastrous lack of hard lessons.

I also wanted to include methods for scaling up magic, meddling with the fundamental forces of nature, and trying to change the world via the logical - or illogical - application of weird science and dubious engineering.

You can a look at MIR's development history here. 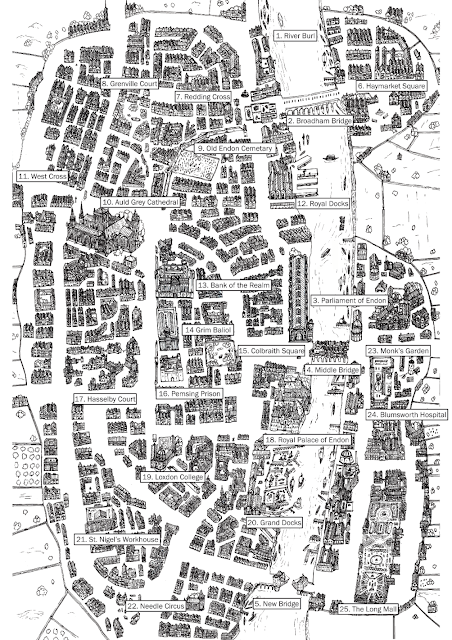 MIR, like all my paid products, was tested with a number of systems, including AD&D, B/X, the GLOG, and (I think), Into the Odd and The Black Hack. Some sections were tested against 5th Edition and seemed to work fairly well.

It's designed for broad compatibility. Assumptions are stated. Wherever possible, conversion tools are provided. You could probably use it with Apocalypse World or Fate by ignoring some of the numbers.


3 extra Innovations from foreignplanets.blogspot.com
1. The Universal Printing Press
2. The Good and Natural Specialisation of Class
3. A City of Sin, A Shining Gomorrah

I'd like to thank Dai Shugars again for his hard work spinning gold from the pile of straw I provided. I'd also like to thank my Patrons, blog readers, and friends for supporting this project. MIR wouldn't exist without you.
Posted by Skerples at 15:09