+Arnold K said: "HEY How come all these D&D settings have the same assumed evolutionary paths. Like they have weird shit like dragons evolving from jealous snakes and yet when it comes to looking backward all the dinosaurs look the same. Why is only the current world fantastic, instead of the entire biologic prehistory?"

In my setting, prehistory is full of edits and changes. The Authority created the world and the laws that govern it, but He cannot see the future and He cannot unmake his own laws. A few bugs have been fixed in production, so to speak.

This history doesn't explain why my setting is so weird. It explains why it is so normal. If you want weird epochs, check out Dan D's list.

All information provided is speculative, mostly incorrect, and irrelevant unless the PCs blunder into a Time Mine or something. Layers are not to scale. 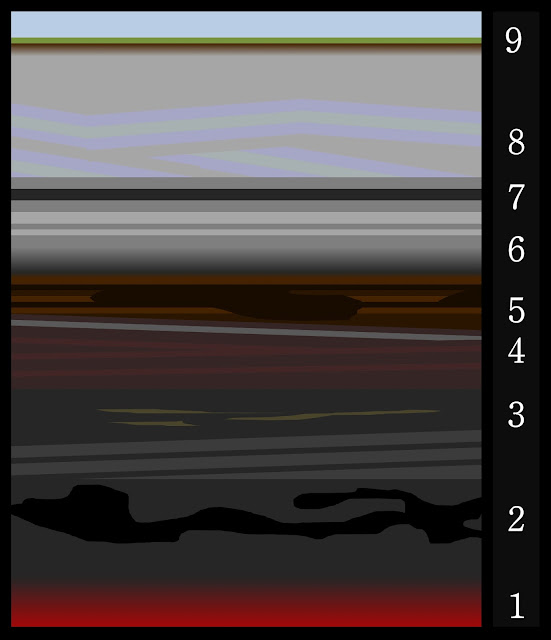 1. The Realm of the Undersun, the Inner World

It moves through rock, slowly heating it, churning the engine of the world. A spiral orbit, eccentric, out of sync, eons long. Roots of plants grow down, seeking the Undersun. Undersolar flares burst off and form volcanoes. Rock down here is molten and fluid.

The oldest stones remember when everything was molten and fluid and warm. They whisper of silicate wars and borohydride apocalypses before the Authority settled on carbon-based chemistry. There might still be silicate cities down there, orbiting the undersun, aware of the distant shell of cold stone above in the same way that surface people are aware of the ozone layer.

A relatively new layer. When the Authority invented plate tectonics to deal with the Troll problem, He enfolded several oceans and trapped them in the rock. They connect to the main oceans in some deep vents, but they are isolated, deep, lightness, and strange. Fish with strange upward-facing eyes and fish with no eyes at all. Colossal squid. Horrible things. Shimmering volcanic rifts and crustaceans of unusual size. Psychic whales and the falling forgotten dreams of surface creatures. A separate branch on the tree of life.

Extinction Event: linked to the Karstein

Trolls were an early attempt at multicellular life. They were immensely successful. They ate everything else. For a time, all life on the surface was trolls, growing and dying and devouring each other in a uniform sea of screaming flesh. The Authority sent the continents whirling and buried them in a flood of molten rock. Troll oil is flammable, smelly, and dangerous. It only takes a few troll cells to grow a new troll. Your lantern might sprout an arm. Several Veins cultures extract Troll Oil for both food and light. Creatures made a deal with acid elementals to combat the few surviving trolls. Acid lives inside us now. We feed it, it digests troll-flesh. Troll stomachs are just moist bags.

Vampires were another optimal path, an unintended consequence of other changes and laws. When it looked like every living creature might become a vampire, the Authority sent a giant stone from the heavens. It smashed into the world, triggering yet another era of fire and molten rock. The vampires were buried, crushed, fossilized, trapped in coal-seams half a mile thick. Mine around the vampire strata if you can, or use silver picks. Wake one vampire and you might wake them all.

The stone's impact created the Moon.

Extinction Event: the Karstein. Extinction of humanoid kveltdveller species, the noble gas dragons, and 80% of all other surface and marine species.

Plants dominated this period. Trees with indigestible trunks grew to enormous sizes, fell, and did not rot. Eventually some bacteria caught on, but for untold years entire forests lay where untouched. They were buried and carbonized. Coal dryads live in them now, ancient and sulphrous, often mistaken for demons. After trees, fungi. After fungi, oozes. Neither fossilized well, so we know very little about this era beyond what the stones can tell us. They say it was "damp."

Extinction Event: the Molinorian. Believed to be caused by the growth of Apocalypse Deathwatch beetles. Coal dryads speculate the beetles were deliberately farmed. Other hagiogeologists have pointed to the presence of fossil angels as indicating a potentially divine source. Loss of 80% of all terrestrial life, including the giant dragonfly, the monkworm, and the redwood spider.

Nutrient cycles established eons ago finally hit their stride. Life proliferates without disorder. Trilobites dominate the seas. Lice-like creatures crawl onto land, are devoured by oozes, develop primitive wings and ooze-steering pheromones. Feudal trilobite kingdoms arise in the shallow seas. On land, a fat-headed lizard species that survived the Molinorian extinction spreads and splinters to dominate most ecological niches, growing from the size of a mouse to the size of a cottage. A few species learn to harness leftover magical energy from creation, including the xorn and the displacer crab.

Extinction Event: the Zwindolinan. An accidental volcanic burp caused by a misaligned continent. Terrestrial creatures suffer 90% losses, including the remarkably successful brullerope brullerope, a lizard that had just discovered fire. Marine organisms suffer 95% losses. The Authority finds a loophole and makes the surviving trilobites immortal as an apology.

7. The Age of Giants

Life returns to regular forms. Giant lizards, giant fish, giant trees, giant ferns. The first microsphinxes ask extremely simple riddles ("Would you like to be devoured?") to tiny hairy lizards. Construction of Heaven is completed. Dinosaur temples established. The first writing system is developed. Agriculture. The first stable spells tamed. Contact with the chromatic dragons is reestablished. The first metallic dragon is smelted for use in a forgotten war.

Extinction Event: the Brogsmian. According to some ancient stones, a piece of rock launched into the air during the Karstein extinction event flung itself past the moon and struck Creation. According to other stones, the dinosaurs sought to invade Heaven. In either case, the world bathes in fire and ash. Oxygen levels drop, killing the magic-hoarding thaumovoric slugs and saturating the atmosphere with potential spells and strange energies. Basilisks, whose stone-to-flesh glands were formerly a minor specialty, thrive in the dying world. Fossilized dinosaurs still roam in the depths.

Extinction Event: The Deluge. Civilization of gren-lings and the gren, wiped out by a worldwide flood. They had deliberately flouted the Authority's laws. Two of every animal saved in a giant wooden boat. When the waters receded, the creatures had become all the different types of lings known today.

A non-canonical, ribald version of the tale says that the good gren-ling who built the boat and filled it with two of every creature neglected to bring along his wife. After a few weeks afloat he became very lonely...

Email ThisBlogThis!Share to TwitterShare to FacebookShare to Pinterest
Labels: worldbuilding