The dEr0 are a disease.

In RPGs, some diseases attack HP or Constitution or Strength. The dEr0 attack reality and context. They attack the player.

If you're not sure what's going on, read and preferably listen to this.
The der0 are schizophrenia. They aren't schizophrenic (ok, they might be). They are the condition given form. If you didn't pick up on it, they're based on Richard Sharpe Shaver's stories, plus a bit of the Air Loom or Influencing Machine. They are the Men in Suits. They have the black helicopters and the poison pills, the subcutaneous implants, the listening devices. They are in league with authority figures. They conspire to destroy you. 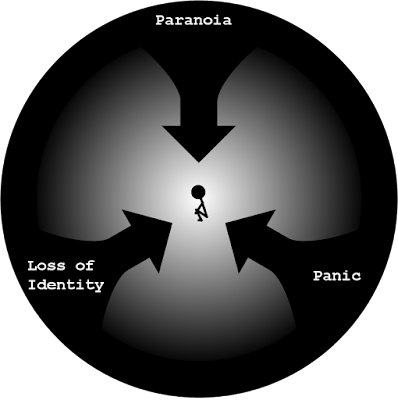 The way I see it, there are 3 main madness vectors in Veins of the Earth.

Specific, targeted, personal. A panic attack. A psychotic break. The imp of the perverse. Sudden guilt. Top-down brain processing overriding the senses. Falling into yourself.

2. The dEr0
Slow, creeping, contagious paranoia. The result of interacting with too many unknown systems. Your brain's desperate attempts to stitch together order in chaos. Bottom-up brain processing overriding the senses. Spurious correlations.

3. Casual Exposure
The very slow, very patient Malthusian-Morality trap where people who don't eat their friends lose to people who do. Gollum is a success story. The Effects table is part of this vector.

But just one encounter with the dEr0 can change your entire worldview.

In my Veinscrawl, this table can only be accessed by the Abyssal Encounter Table. The encounter only targets one PC, if possible.

dEr0 Machines and Conspiracy Pills can be found on Veins of the Earth pg. 172.

Entering the der0 Conspiracy: You were the target of a roll on the dEr0 Encounter Table or someone convinces you the the dEr0 Conspiracy or a dEr0 Realization is true.

Stages:
1. Aware. The amount of bullshit in your life increases tenfold. Everything around you is a trap, a mind control device, poisoned, disguised, or conspiring against you. Sometimes all of the above. Everyone around you, friend or foe, has secret movies and sends secret signals. Paranoia reigns.

At any time, you may roll on the dEr0 Realization Table. You can do this once with no consequences, but if you do it a second time, you advance to the next stage of the der0 Conspiracy.

2. Involved. All dEr0 instantly recognize you as a member of the conspiracy. You will be handed secret documents; the documents contain a poison gas bomb. The gas allows you see through walls. Maybe. You will be accepted, possibly trusted, and constantly tested. Strange things happen to you without obvious causes. You can hear voices of people in the next room; you can taste fear and smell gold. You think. You become unable to write or speak without tangents and digressions and a lot of hand-waving and panic.

The GM may roll on the dEr0 Realization Table once per session (no matter how many characters are participating in the conspiracy at this level.)

3. Collaborating. Your sanity collapses. Save. If you fail, your character runs screaming into the night, to be seen again only by people in the der0 Conspiracy. If you pass, roll on the dEr0 Realization Table once per encounter (social or combat).

1. dEr0 Manual of Surgical Alterations
A bundle of paper, leather, skin, and metal. No spine, no covers, no index. Reading any part of this book inducts you into the der0 conspiracy (level 1).

If you read the book and consult it like a manual, you can perform any surgical feat you describe. Unusual materials will be required; silver coins, hair, nails, straw, dead cats, human blood, and earwax are good starting points. Just for starters, der0 surgery can:
-transfer an effect or ability from one creature to another (dragon's breath, troll's regeneration, beholder's eye-beams)
-grant +1d6 or -1d6 to any Stat.
-transfer memories or implant false ones.
-raise the dead.
-cure or inflict any disease.
Anyone who has der0 surgery performed on them is also inducted into the der0 conspiracy (level 1) if they are ever made aware of the fact. The surgery is not neat; strange lumps, buzzing sounds, side-effects, scars, digestive disorders, and madness may result.

2. Dopplegangers
Need a perfect agent? A loyal hireling? A willing partner? The dEr0 can provide. Some dopplegangers are merely sacks of wet vegetable matter in a crudely sealed skin bag. Some are identical to their originals in all respects, including memories. Memories can be implanted or exchanged.

3. Impossible Knowledge
The dEr0 know a lot of things.
They may lie to you.

4. Safety
Ironically, the Veins are so ludicrously dangerous that constantly rolling dEr0 Encounters might make regular encounters safer than usual.... provided you keep playing along.

-The dEr0 never do the same thing twice (unless they merely appear to be doing the same thing twice).
-the dEr0 are not trying to kill you. They are trying to use you.
-Everything is a problem.
-Either you misunderstand the situation or the dEr0 misunderstand the situation. It is impossible to tell which. Evidence is missing or conflicting.
-Every situation has multiple interpretations.
-The dEr0 have all possible goals at once.

Usually, it's vital for the GM to convey a consistent picture of the world. Saying something is one way and then changing the description later leads to confused and unhappy players. With dEr0 encounters, altered descriptions become a useful tool. It's a great way to describe hallucinations, madness, and paranoia without stating broad and obvious facts. Try to ensure there is no true or obvious answer. In a setting with doppelgangers, mind control, illusions, and teleporters, alternative explanations should readily present themselves to your players.


It's a method of showing, not telling. Show your players what their PCs are experiencing, rather than telling them "something ate your memories; we're starting in media res" or "you are hallucinating and you see X." Done sparingly, this is a very effective tool.

Unless a PC speaks to the dEr0 directly, they shouldn't know they are dealing with "the derro" or what exactly is happening. Keep as many secrets as you can. Feed false theories, such as:
-the PCs are being stalked by an invisible creature
-there is an ancient civilization of machine-makers
-there is a rival party hunting the PCs

It's very easy to make the dEr0 comical. Resist the urge to Flanderize them. Keep them sharp and cruel and enigmatic. Stalinesque.

Pattern recognition is a vital learned skill for players. "Aha, there are 5 symbols in this room and 5 symbols on the staff we found. I wonder if..." or "You said the King was left handed. Guards! Seize the imposter!"

Normally, the more patterns a player spots the better. But the dEr0 reverse and abuse this. Feed paranoia. Feed speculation. Never let on that there's nothing.

If you're going to pass notes to one player, pass false notes to other players. Ask for secret conferences outside the room. Pass notes that ask for specific out-of-character actions or reactions. "In 2 minutes, you and Mark should take a break and pretend to have a secret chat in the other room." Anything you can do to set the dEr0-infected player's mind on edge.

Some people think there should be one "true" reality and "hallucinations" get layered on top. That doesn't need to be the case in a RPG. Reality is malleable. Don't commit to anyone one set of facts around the dEr0.


GM: You tie the rope around your waist and begin to rappel down.
Player 1: Can I draw my dagger at the same time?
GM: [rolls dice for effect, pretends to consult a table] You can't seem to find your dagger.
Player 1: Oh shit. I guess I'll keep going then.
Player 2: Can I see her look for the dagger from the top of the cliff?
GM: She's pretty far down. It looks like a little light dangling on the end of a rope. I'm pretty sure you can't see any details.
Player 2: Fair. I'll probably look around the area anyway while I'm waiting.
GM: Ok, you see [PC 1] tying the rope on to the piton, getting ready to descend.
Players 1 and 2: What the fuck?      Player 1: So I wasn't already descending?
GM: You're not sure, but you're pretty sure you haven't started yet.
Player 1: I'll go check the rope. Is there a person on it? I'll also draw my dagger.
GM: You don't see anyone on the rope or any light at the bottom.
Player 2: I'll also draw my dagger.
GM: You can't find your dagger. [PC 1] has it. He's holding it.
Players 1 and 2: What the fuck?

Again, it's usually vital for the GM to keep track of things that happened. The GM's word is final - what they say, went - but players can remember things too.

Only gaslight small, inconsequential, and unsettling details. Past a certain point, it moves from unsettling to annoying to obvious dickery.


Player 1: I'll go check on Dorina, my hireling.
GM: Who?
Player 1: Dorina? I hired her back at the Antling encampment? Quarter share? Antling?
GM: [flips through paper] Nope, nothing on Dorina here.
Player 1 :You sure?
GM: Yup, don't remember that at all.
Player 1: Well dang. I guess I'll go on without her.
[several minutes later]
GM: Dorina asks you if you need anything.
Player 1: What the fuck? Dorina?
GM: Yeah, your hireling? You remember.
Player 1: Yeah, I remember. It was you who didn't remember!
GM: No no, it's on the sheet here.

Seriously, if someone catches the "dEr0 infection" you're probably better off killing them. Except how do you tell if someone has been contaminated? Maybe you are contaminated. Maybe the dEr0 want you to kill your friends? Oh god...

I recommend reading Illustrations of Madness or other works covering the progression of paranoid schizophrenia before using the dEr0. I would also be cautious. Schizophrenia is not contagious but it somehow feels like it could be contagious. If any of your players have paranoid tendencies in real life, it would be a tragedy to push them into madness with a game about elves and dragons.
Posted by Skerples at 22:24