Warhammer 40,000 exists in a weird gap in the wargame spectrum. There are excellent skirmish games, and excellent large-scale battle rules, but very few rules for large battles at the 28mm scale. There's probably a reason for that.

A skirmish game can take an RPG-like approach to each model. Rules can be complex and detailed because they don't need to be used very often. When you're tracking a grand total of 12 models, all sorts of rules become viable. There are some great skirmish games out there, including:

But at the odd scale of Warhammer 40k, every model has to count. Any rules for 40k have to go from the platoon level (e.g. a character, two squads, and a tank) to the army level (massed infantry, monstrous units, giant walkers, etc.), and deal with normal humans and walking demigods. Every model needs to stand on its own. You can't treat one squad of 10 with a single profile.

There's an OSR-type movement in the Warhammer community too. Some people are perfectly happy with Rogue Trader (for good reason; it's fun!), and some more are working on hacks of 2nd Edition. There's a dubiously legal "Warhammer 40k 2nd Edition Battle Bible" floating around out there. Project Anvil is another 2nd Ed hack. It's all very exciting.

In fine DIY tradition, I've made my own hack. Introducing: 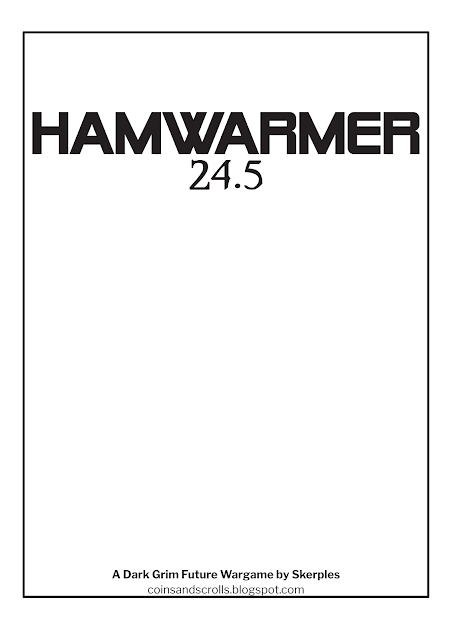 HamWarmer 24.5 (PDF) is vaguely based on Warhammer 40k: 9th Edition (free PDF), with some rules borrowed from older editions or entirely invented. It is non-commercial, unprofessionally distributed, hastily made, entirely unofficial in every way, and completely free. The current PDF is 9 pages long.

Currently, only the core rules are complete, but I'll be adding faction rules and scenarios in short order. Expect this blog post to change rapidly over the next few months.

HamWarmer 24.5 is intended to be a hobbyist-friendly rules set. If you've built it and painted it, chances are there will be rules for it... eventually. I'm going to work on the factions played locally first, then work on the others.

Rules burnout is real. Games Workshop produces new rules on a regular basis, and once you've read enough rulebooks you stop caring and lose interest. Patterns emerge. Every time a new edition is released, some units - usually something newly released - become absolutely vital. In the next edition, they get "fixed', and the cycle repeats. Lovingly painted units are supplanted or deleted. Rules grow as every unit, faction, and subfaction gets mechanical differentiation.

Luckily, I can avoid a few of these problems. I can't avoid all of them (or the game wouldn't be Warhammer 40k), but I can write rules and patch them daily (if needed). I don't need to make them perfect, just good enough for casual play. I can write them all at once, fixing units from one faction as I write rules for another faction. I don't need to sell models, take photographs, write lore, grapple with the implications of the setting, or pay anyone.

I can also playtest continuously and adjust rules based on feedback, without needing to write from a position of supreme and unquestioned authority.

These changes will only make sense if you're somewhat familiar with Warhammer 40k's published rules. Feel free to skip them.

Links will be added as PDFs are completed.

I've run some tests. Asking people to bend over their kitchen table and take photographs is surprisingly easy; apparently everyone's bored during lockdown. A 5-6' tall human bending over a waist-high table can safely reach about 2'. They can look directly down at anything closer than 1', maybe 1.5" if they've got a long neck.
Therefore, no matter how long the board is, it can only be 4' wide.
GW's 28mm scale is a bit wonky (and wargaming in general compresses distances and scales for the sake of convenience), but let's say a 6' character gets a 1.25" tall model. 6' real scale / 1.25" game scale = 4.8' per 1". A 4'x8' (48" x 96") battlefield, the largest most people ever use, is therefore approximately 230' x 460'. 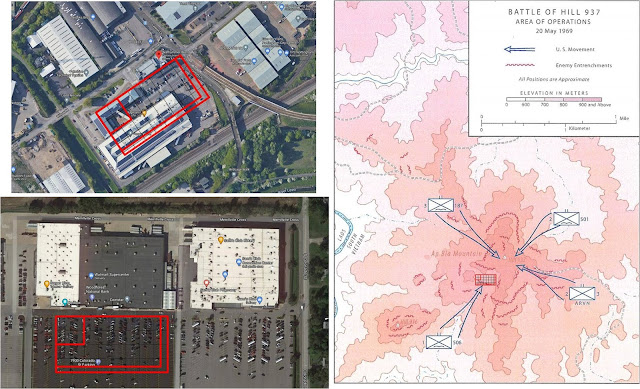 The outer red square is a 4'x8' board. The inner red square is GW's new 44"x90" minimum-maximum size. The smallest red square is a 2'x2' skirmish board. Boards are compared to Warhammer World in Nottingham, a Walmart in Gary, Indiana (selected because it's exactly north-south aligned), and Hill 937.

You can argue about the model-scale to real-world-scale conversion factor, but even if I'm off by 50% or more, you can see that the battlefield doesn't scale up to anything like a realistic size.

Some Titanwalk events (where people bring their superheavy war engines like toddlers to a playdate) use the floor of a convention centre boardroom as the battlefield, but that doesn't really work for tiny plastic models. It works fine if you're using prepainted lead soldiers, but delicate plastic figures are likely to become expensive caltrops.

So no matter how epic your battles may be, remember that they're effectively a pub brawl on a Saturday night.