Tyranids are a curious faction in 40k, rules-wise. Every Codex author seems to take a different approach. Points costs, abilities, and stats swing wildly. A Lascannon is a Lascannon, but nobody seems entirely sure what any given Tyranid thing is, or even how certain units should function.

I've tried to write an interesting Synapse ability. Tyranid units need to stick fairly close to a Synapse creature to be carefully controlled; outside Synapse range, they more-or-less need to be steered. Dismantling an army by targeting the Synapse creatures, then driving off the survivors.

As usual, points costs will be adjusted as testing progresses. With the Faction: Space Marines book, I'm fairly confident on basic infantry and wargear costs, but less certain on the powerful vehicles. With Tyranids, it's the opposite. 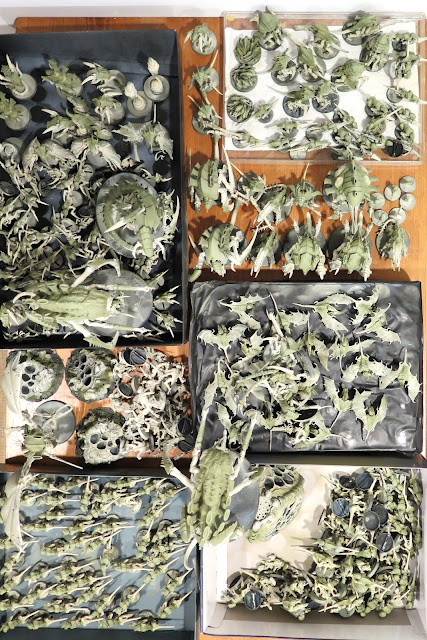 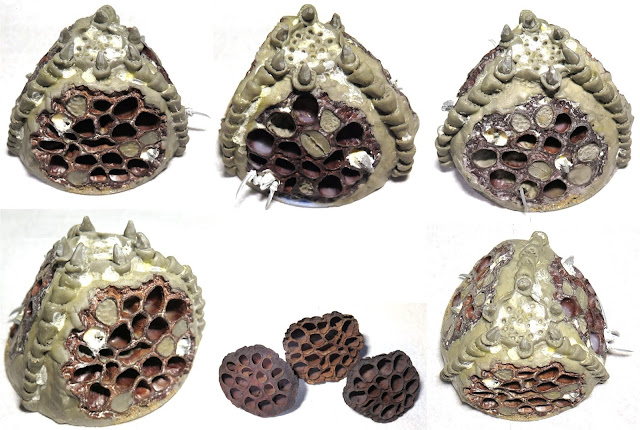 Painting Recipe:
Started with a black basecoat, did a zenithal highlight in white. Didn't end up showing much, so you can probably skip it. The chitin is Vallejo 71.023 (Hemp), the carapace is Vallejo 71.075 (Sand Ivory). Both were highlighted up with the same colour and a few drops of white. Didn't mask anything while airbrushing, so there's a bit of overspray in a few places, but I can fix it while doing final brush highlights.

Then, models were inked with Vallejo 73.300 (Sepia wash). It's not my favourite, but it's cheap, it covers well, and it can dry in interesting shades (from yellows to reds) depending on thickness, so it's good for adding some variation.

After a final drybrush (still testing colours) and some fleshy details, and a bit of light basing, they should be done. Will adjust this post to include final paints.

I'm thinking of running a "Select-Thy-Own Disaster" story (or series of stories) on Patreon, where the Patrons control (by voting) the actions of a small group of probably-doomed characters. In-person gaming has been difficult due to Covid, so this feels like a decent substitute. Plus, I get to show off my appalling painting skills! Yaaay... 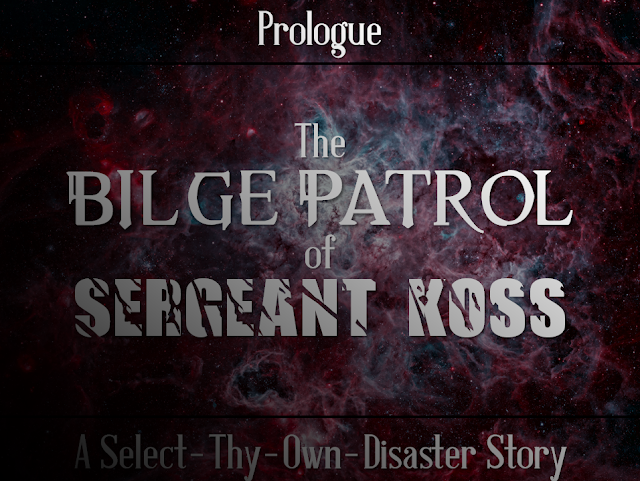 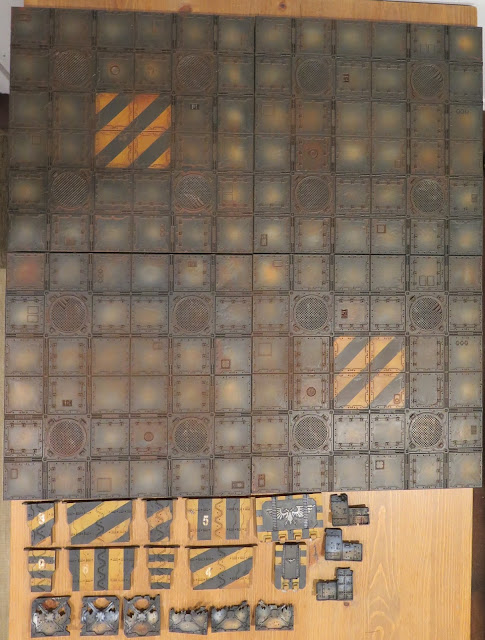 The terrain (like most of my terrain) is painted with just 5 colours: Black, Ivory, Ochre, Burnt Umber, and Burnt Sienna. All cheap artist acrylics. Oh, and a bit of metallic silver, but that's just for accents and doesn't really count.

After priming black, I highlighted the centre of each square (and various panels) with ivory, using the airbrush. I then applied a random mix of burnt umber and bunt sienna using a large brush (dipping one side in one paint, the other in the other, and smearing them to create an uneven pattern), and carefully thinned it across the whole board. Doors and central chevron areas were taped off and painted with ochre, then stenciled with ivory.

Once that was dry, I applied a wash made from burnt sienna, tap water, and a drop of dishwasher anti-spotting liquid to decrease the surface tension. While that was drying, I applied smaller washes with black and burnt umber.

The whole process is very quick. With highly detailed and textured terrain like this, you can let the structure tell the story. I feel that terrain shouldn't dominate a scene, so picking these relatively muted colours, and applying them consistently across several projects, lets my miniatures stand out... for better or for worse.

Anyway, stay tuned for more news and something resembling a release schedule.