I'm trying to build a set of very simple ship combat rules. They should be mechanically crunchy enough to allow for variation, upgrades, and tense duels, but not so complicated that you need a slide rule and a whole table of terms to use. The rules are vaguely based on FFG's Rogue Trader starship combat rules. They should work for Age of Sail combat... as seen on TV.

The core ideas should also be adaptable to ancient sailing battles. Just adjust the speed and range accordingly.

Feel free to pick these apart. The exact numbers are trivial to adjust based on playesting. General concepts are more difficult.

As opposed to exploration sailing. This is for fights.

There are 3 kinds of wind:


1. No wind (doldrums, becalmed). A special event on the weather table.

Rules for fog, whirlpools, hurricanes, rapids, shoals, and islands during combat will be added at some point, but based on these rules I think you can see how I'd do it.

You’ll need a grid. Each square is 100 feet. Each ship combat turn is 5 minutes. Ship speeds are quite a bit lower than top sailing speed, but it's a sacrifice I'm willing to make to avoid using hundreds of sheets of graph paper.

Each round, ships act in order of size, largest to smallest. In order:
1. The ship attempts a Manoeuvre for the round.
2. The ship moves its full Speed straight ahead.
3. The ship may turn up to 45 degrees.
4. The ship fires its Weapons.
5. The ship performs any Special Actions.

Speed: How fast the ship can move, in squares per turn. This doesn’t correspond to knots or actual speeds. It’s a convenient abstraction to make combat interesting. Don’t tell the sailing people.


Manoeuvre Bonus: How nimble the ship is. Applies to rolls made for Manoeuvres.


Ship Hit Points: The total health of the ship. Negative effects occur at half and quarter HP.


Masts: Number of masts. Useful for some critical hits and identifying ships at a distance.


Marines: Hit Points of specialized combat-only troops who do not assist with regular sailing tasks. Cargo Capacity: How much Loot a ship can carry. 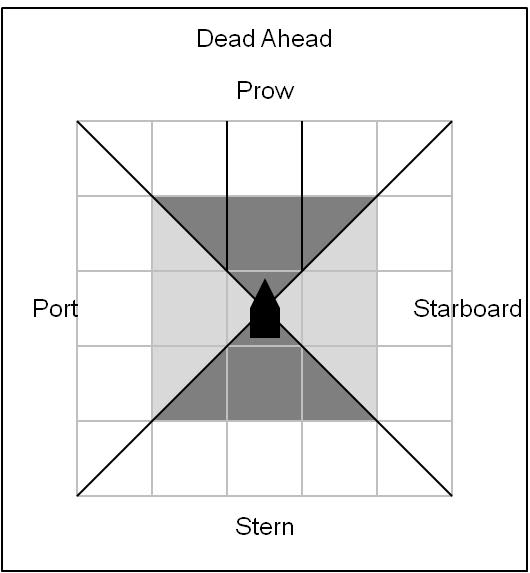 Stats are all provisional; testing is ongoing.

Raiding Sloop
Speed: 6
Manoeuvre Bonus: +5
HP: 20
Masts: 1
Crew: 10 HP
Cargo Capacity: 2
Main Weapon Capacity: 1 Pro
Raiding Sloops may automatically use the Quick Turn Manoeuvre each turn, in addition to any other Manoeuvres. It may not use the Hard About Manoeuvre in the same turn.

To shoot a weapon, roll under 8+ any bonuses. An extensively trained crew might increase this to 10+bonuses, but most of the time, gunnery is horribly inaccurate at anything beyond point-blank range.

A weapon firing at half range gains a +4 to hit. Any weapon fired at Range 0 gains a +8 to hit. Getting to point blank range is the goal. The role of a ship is to carry its guns within point blank range of an enemy, fire them as many times as possible, and render the enemy unable to return fire. Victory is assured through boarding actions.

On a critical hit, roll on the Critical Hits table.

Damage: Like a standard weapon. On a hit, deal damage to the ship’s HP. All hits also deal 1 damage to a ship’s Crew HP and Marines HP.

Some weapons have special properties, restrictions, modifiers, etc. listed below their main stats.

The helmsman must roll under their Dexterity + the ship’s Manoeuvre bonus + any bonus or penalty from the manoeuvre attempted.

Any PC can attempt a Special Action. Roll under the stat listed with the action, applying the bonus or penalty listed. NPC ships can generally attempt 2 or 3 special actions.

Man the Pumps
Can only be used if the ship is Swamped.
Roll: Strength or Intelligence -4
Pass: The ship is no longer Swamped. At the start of its next turn it may move normally.
Fail: The ship is still Swamped

Locked Together
The ships move straight ahead at the slowest ship’s speed. Both ships can still fire normally. They count as being at Point Blank range with respect to each other.

At Anchor
The ship does not move and cannot make any Manoeuvres. It may turn up to 45 degrees.

Swamped
Instead of moving normally, the ship moves 1 square forward. It may not turn and cannot make any Manoeuvres.

Sinking
A ship will sink in a number of rounds equal to its original HP divided by 10. Find boats, flee, grab treasure, and run around in a panic.

Dismasted
A ship with no masts cannot make any Manoeuvres. If it didn’t start with any masts (Rowboats, Gigs, etc.), this does not apply.

Half Ship HP
A ship at half HP takes a -4 penalty to all Shooting, Manoeuvres, and Special Actions.

Quarter Ship HP
A ship at half HP takes a -8 penalty to all Shooting, Manoeuvres, and Special Actions. It is automatically Swamped.

Zero Ship HP
A ship at Zero HP is Sinking. It cannot Shoot, or take any Maneuver or Special Actions.

Half Crew HP
A crew with half Crew HP takes an -4 penalty to all Shooting, Manoeuvres, and Special Actions.

Zero Crew HP
A ship with Zero Crew HP must surrender. This doesn’t mean everyone is dead, but it does mean further resistance is impossible. Everyone is wounded or exhausted.

There will be some sort of ship character sheet to help track all of this. 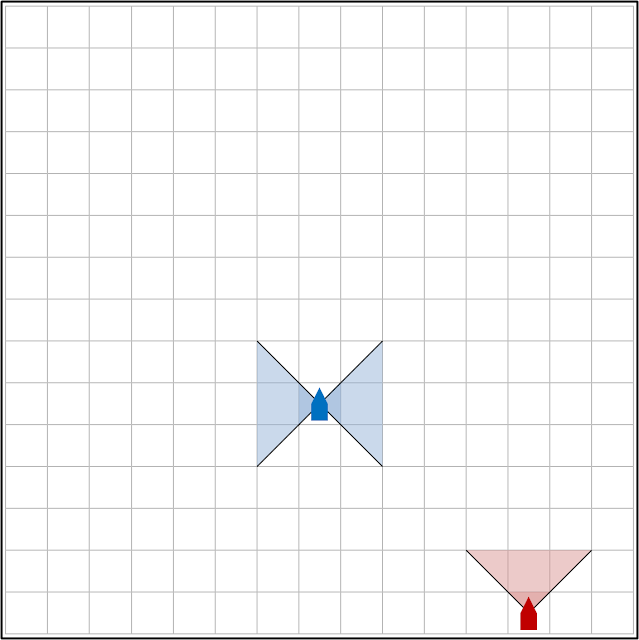 A Raiding Sloop (Red) has run into a Customs Frigate (Blue). The sloop is enormously outclassed and outgunned. She is also carrying a cargo of opium from Yoon-Suin; very illegal. 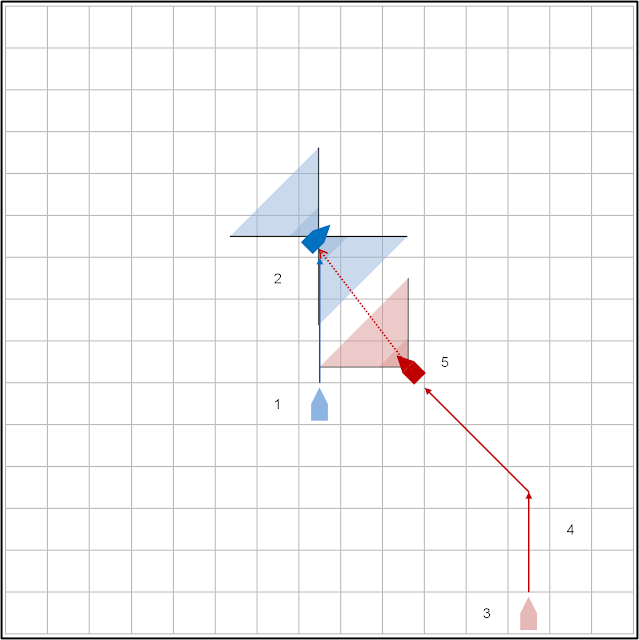 1. The Customs Frigate moves first, as she is the larger ship. Her Speed is 4. She is not sure where the Sloop will go, so she attempts no Manoeuvres.

2. The Customs Frigate moves straight ahead 4 squares, then turns 45 degrees to starboard, hoping to catch the Sloop in her powerful broadside. She takes no Special Actions. She could take the Fire At Will Special Action, but she hopes to catch the enemy in a fully organized broadside at the end of her next turn, not sporadic and less damaging fire.
3. If the Sloop moves straight ahead she will be at the Frigate's mercy. The Sloop can automatically perform the Quick Turn Manoeuvre. She chooses to perform this Manoeuvre, and also chooses to try for the Line Us Up Manoeuvre. She succeeds. Her shooting gains a +4 bonus this round.

4. She moves 3 squares ahead, turns 45 degrees, and moves a further 3 squares.

5. The Sloop now has the Frigate directly in her sights. She fires her Prow Chasers. The enemy is at half range (+4 to hit) with a further +4 from the Line Us Up Manoeuvre. Base 8+4+4 = 16. The Sloop rolls, hits, and deals 2d6 damage to the Frigate's Ship HP, plus 1 damage to their Crew HP and Marines HP. This barely chip's the Frigate's paint, but it is still a nasty surprise for her officers and crew. 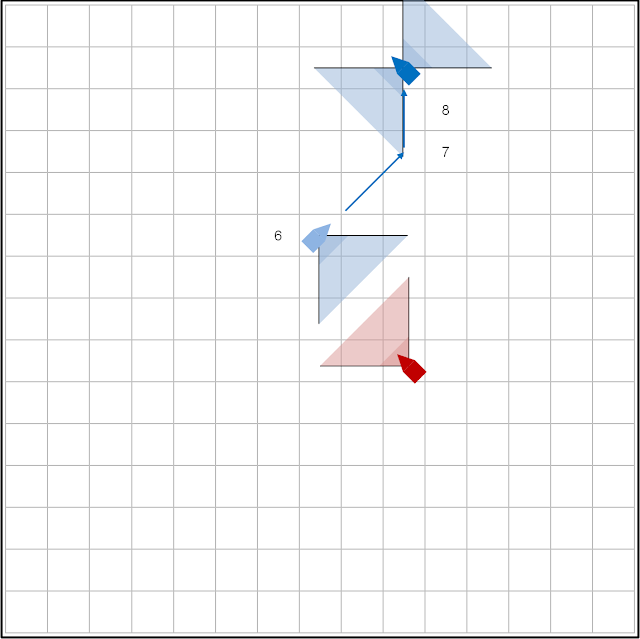 6. The Frigate, realizing the Sloop may escape her, decides to use the Hard About Manoeuvre.
7. She moves half her speed (2), turns 45 degrees, moves her remaining distance (2), and then turns a further 45 degrees.
8. From her new position, the Sloop is likely to pass within her full broadside. 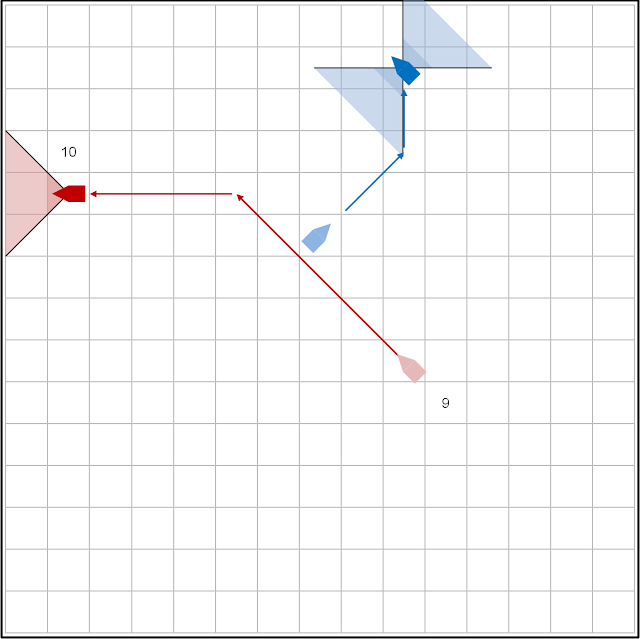 9. The Sloop, however, hopes to use her considerable speed to escape. She lays on More Sail and uses her automatic Quick Turn Manoeuvre. She succeeds. She moves 4 squares, turns 45 degrees, and moves another 4 squares.
10. The Frigate can try to come about and catch her, but at extended range and no easy way to add bonuses to shooting, the Frigate is very unlikely to ever catch up with the quick Sloop. The Sloop can also manure directly in front of the Frigate 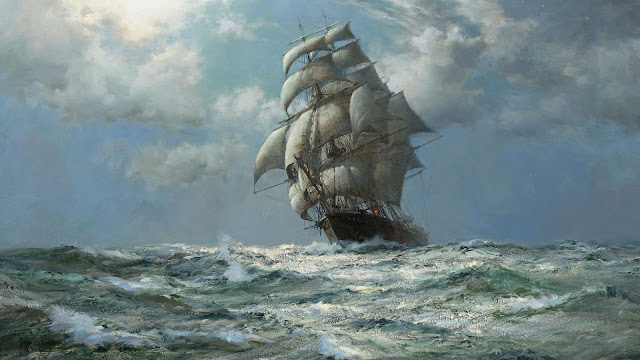 There's lots and lots of room.

It should be reasonably simple to add rules for flamethrowers, chain shot, lightning guns, torpedoes based on the core weapon stats.

Upgrades for extra sails, crocodile-powered waterwheels, fog generators, and all the usual piratical nonsense should be easy enough to add. I don't want to create an explicit "upgrade slot" system because that gets fiddly.