The game I'm running isn't a hexcrawl, or at least, it's not a hexcrawl yet. It's still nice to have a map.

Nothing is finalized. I'll change names and locations as needed. 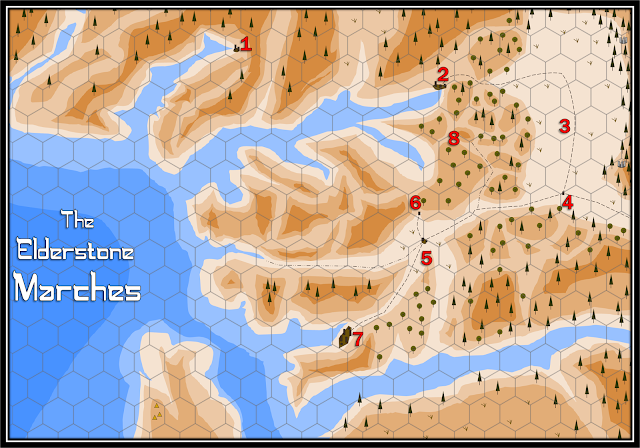 1. Some unnamed port village, accessible only by sea. Good location for: "track down the wizard", "there's a sea monster", "oh look, these people are all weird", "we accidentally started a war and need to hide out for a while" plots.

2. A large town, in decline. Maybe it's built in the ruins of an older settlement? Not sure. A dark mirror of the energy of Elderstone, but still prosperous.

3. The Big Marsh. It's big. It's a marsh. There are monsters in it. The PCs need to travel through it. There are stone circles and druids to the east.

4. The Watchtower. Built on a rare dry point to mark where the King's Road forks. It's also an inn.

5. The Village of Bogrest. Less than a hundred people. An Inn: the Black Stone. Eel farms.

6. Something. Another watchtower? An old aqueduct? What's 6 miles out of town, on a hill, and made of stone?

7. The large town of Elderstone. Possibly a city. It's a major port. Most of the trading takes place by sea, not overland. Towers, like Barcelona, but curved like seashells to shelter from the wind. Intermittent wizards.

8. The Tomb of the Serpent Kings. In the middle of the Loathsome Hills. While it might look like a short ride to (2), you'd probably be safer coming back the way you came. A fire a few years back cleared off the old Snakemen road to the fort. Or maybe it was a rebel army, who rebuilt the fort and cut a secret path along the old road? Not sure yet. The fort needs more backstory, and quickly, as the PCs are going to rebuild it and turn it into a Tomb-Robber Hotel, if they get the chance.

The entire area is recently resettled. Maybe there was a plague, or a war, and the population is slowly recovering? The hills are forested once you get away from the major towns. Druids live in them, and wolves, and worse things as well.

Despite the arid palate, the Marches aren't a desert at all. It was just nicer to look at than greens and greys. In terms of climate and vegetation, it's closer to north-central Canada, or the Highlands before they were cleared of trees.
Posted by Skerples at 23:31