Thanks to a bit of luck and a few good deals, my Tyranid army is speeding along. Most of the kits have been in production for 15+ years, so used Tyranid models are both abundant and cheap... if you're willing to put in the time to strip and repair them.

There are two easy ways to strip paint from plastic models... and a lot of difficult ones.

Simple Green is the most common, but other mixtures will also work. A base (ammonium chloride, triethanolamine, sodium hydroxide, etc.) and an alcohol or glycol of some sort, plus a bunch of other exciting chemicals, premixed in a jug. They're used to clean difficult stains without destroying the underlying material, and work just as well on plastics as on garage floors. Pick the one with the most safety warnings. Anything with an attached MSDS is good.

I typically soak models for 3-4 days, then scrub with a toothbrush. For tanks and terrain, a large plastic bristle brush is fine, but it's hard to find a sufficiently stiff brush that's small enough to work on models. You can safely leave models in the solution indefinitely. Simple Green also works on resin and metal.

Like any powerful cleaner, Simple Green will take off skin as well as paint. Wear gloves and goggles, work in a well-ventilated area, and wash any contact areas quickly. The ammonia and glycol mix makes a unique smell, so either seal your container or keep it away from dining areas.

I've used Simple Green for years, sometimes with good results, sometimes with limited effectiveness. If a model is coated in varnish, Simple Green will struggle. It also struggles to remove primer, though this can be beneficial. Free paint is free paint. Recently, I've switched over to methanol and I'm much happier with the results.

A straight alcohol (isopropanol or methanol) is effective. Drug store bottles of isopropyl alcohol are fine but expensive. A quick trip to a hardware or camping supply store will get you a big jug of alcohol, which should last you for ages. Methanol removes paint after ~30 minutes and removes primer after ~6 hours. Only gentle scrubbing is required.

Denatured alcohol (ethanol mixed with stuff to make it undrinkable) will also work, but it's getting harder to find these days and the smell can be appalling. Not the best plan. If you run a bootleg distillery or need to use up litres of discount vodka, ethanol is the way to go.

Forgeworld resin and GW Finecast don't like methanol. They slowly get softer if they're left to soak. I use a quick brush on, scrub off approach, which works fairly well.  Acetone, another commonly available solvent, will destroy both resin and plastic (including your plastic buckets). It's dirt cheap, so use it on metal, but take care to use plenty of cold water when washing it down the sink or it'll corrode any plastic pipes it encounters.

I haven't tested any of the common aromatic solvents (benzene, toluene, or xylene), and I'm not really inclined to. Methanol is enough. Filling my house with wafting clouds of toluene does not appeal.

As with any solvent, use gloves and goggles, and keep the fan running. Methanol will dry out your hands, but it doesn't burn like Simple Green. Don't drink any. Inhaling the fumes isn't great, so either use cold water or turn the fan way up, but it's not particularly toxic.

I use heat-mouldable plastic (Blue Stuff / Oyumaru) to quickly cast bits. It's idiot-proof, it's quick, and you can get fairly decent results just using a clamp and a bit of practice.

I'm currently using Milliput mixed with a tiny bit of Tamiya Epoxy Putty for casting bits or sculpting new ones. The result is smooth but not as brittle as straight Milliput. I'm not an expert sculptor or anything, but I'm following a few tutorials.

I sometimes use Super Sculpey for joints or gap filling. Superglue absorbs into the clay and forms a hard shell, but it's not structurally strong. It's handy for holding difficult joints in place.

I use Vallejo Plastic Putty to fill small gaps and fine lines. It mixes with water to form a milk-like spread, which is very handy for tiny joints or thin lines. It shrinks a tiny bit as it dries, so two or more coats might be needed. It's got a slightly rubbery texture and doesn't sand well. For larger gaps, any old plastic or epoxy putty will do.

When in doubt, raid the bits box. 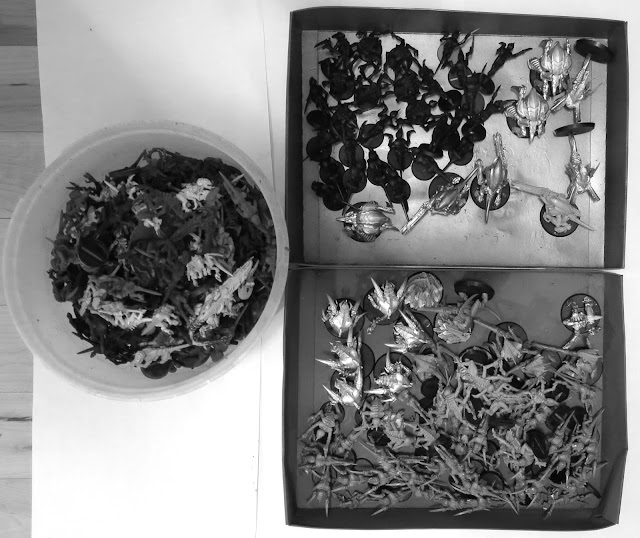 I'm honesty not sure how many Termagants and Hormagaunts I've got now. Many. That 4L bucket is nearly full of them in various states of repair, plus some Genestealers and other oddities.

The other two boxes are full of completed but unpained models. I've filled in eye sockets with putty, fixed gaps, trimmed mold lines, and adjusted poses. The 3 Hive Guard and 3 Tyrant Guard were a nice surprise. They're hefty little lumps of pewter! 3 Forgeworld ripper bases (of dubious origin, but I'm not going to look a gift Ripper in the mouth) also turned up.

Speaking of Rippers, I've been experimenting with different ways to cast Ripper heads. A base with just 3 or 4 Rippers on it doesn't seem sufficiently menacing. I'd like to flood the board in a tide of anklebiters.

I've also decided not to magnetize anything. Magnets let you swap out limbs and weapons easily, but it just adds to the number of fiddly pieces to keep track of. Preventing limbs from rotating wildly during play is also difficult; it's hard to get the perfect pose when parts can swivel freely. I'm not worried about making a competitive list. 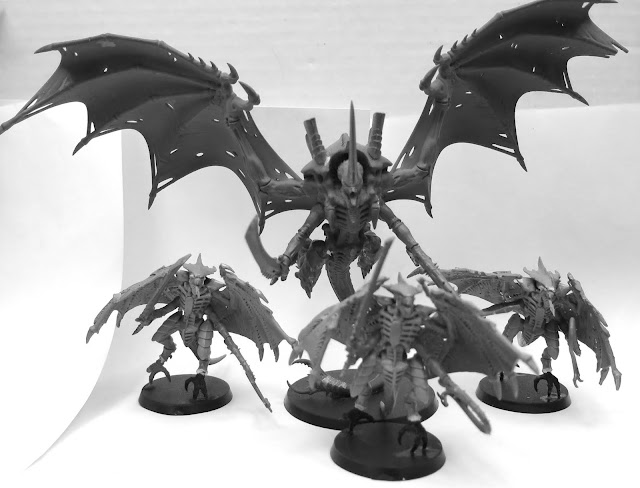 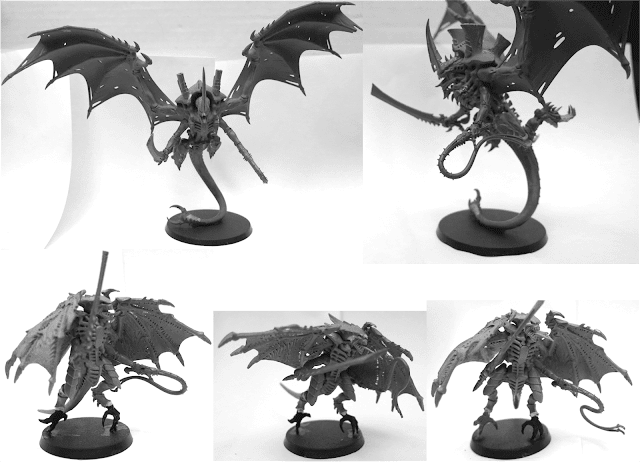 Remember how I said I probably wasn't going to do a flying section in this army? Well, I found three sets of OOP Forgeworld Shrike wings at the bottom of a box and a few squads of Gargoyles turned up, so a Flyrant was practically mandatory.

The photos aren't great, but I really like the poses. Replacing hooves with rending claws gives both the Hive Tyrant and the Warriors a sense of menacing lightness. The Hive Tyrant looks like it's braking just before landing; the Warriors look like they've landed and are sprinting forward.