Most of my better thoughts went into this post from 2017. This post is leftovers, footnotes, and expansions.

c is cognitive speed. It's not intelligence, it's the speed at which a mind processes information and initiates actions. It's not an exact measure. Humans operate at 1c (mostly). A fly, casually dodging your flyswatter, operates at 10c or 100c.

#c is the local baseline cognitive speed. For humans, that's 1c. For some trading algorithms, it might be 10,000c or more.

Naval battles, in the age of the battleship, were both surprisingly slow and astonishingly fast. Engagements were plotted on a <#c scale. Relatively few 1c-scale decisions matter. Effectively, it doesn't matter how good your intuition is, because you've usually got plenty of time to make mistakes.

A chess game, despite requiring a lot of thought, takes place on a <#c scale. The point isn't thinking quickly (thought that does help). It's thinking correctly.

Baseball requires >#c decisions. These days, a batter has to swing as the ball is leaving the pitcher's hand. No time for conscious cognitive processing. No time to aim. Just analysis and action at a level below the steady 1c tick of conscious thought.

A fighter moving faster than the eye can follow is a standard trope. A cyborg gunslinger with iron muscles, sprinting through raindrops that seem to be standing still.

There are still limitations. The faster you move pieces into alignment, the more force you need to apply (and then cancel out).

Consider lobbing a tennis ball gently up, then swatting it gently down, then catching it. Takes about a second and doesn't require any particular effort. If you want it to take a hundredth of a second, you need to toss it harder, swat it harder, and then cancel out the force when you catch it.

Then imagine swinging a gun into position. You not only need to apply an impulse, you need to accurately cancel that impulse when the weapon is in the correct position. Slam. Slam. The faster you move, the harder the impact. The slower your brake, the longer it takes.

The mass you're moving is also a factor. It's a very human reaction, when two boats are about to bonk into each other, to reach out to push them apart. Can work for canoes. Does not work for yachts. That's how you lose a hand.

The speed of your servos (which includes biological muscles, motors, handwavy nanofibres, etc.) needs to be balanced with their strength. Strength, of course, being a vague term correlated to mass and scale; how strong (in human terms) is a flea? The material you're moving through also matters. Around here, water is around 1,000x as dense as air. It's why airplane propellers are fast and big and boat propellers are (relatively) small and slow.

So there's a cap on speed, tied to mass and strength. It's still significantly faster than human muscles, but it's fast. I wouldn't bet on humans in a human vs. robot fencing or ping-pong contest.

Where >#c excels is choice. Do you go left or right. Draw your sword or your hammer? >#c gives you time to weigh options.. without any extra information. Without information and properly formed heuristics, all speed gets you is wheel spin and pointless analysis. Hyperactivity is not productivity.

Weapon-wise, a generic sci-fi plasma gun is a good example for >#c units. Adjustable rate of fire, spread, burst, intensity, and range. All values you can adjust on the fly. And all, mercifully, ones the GM doesn't need to adjudicate; just assume the optimal case.

Humans have a built-in "safety valve" for decision-making. It's obvious in chess. You sit there thinking "Do I move my knight or my queen? If I move my knight, my opponent will.. [long branching chain of events].  But if I move my queen, my opponent will... [another long branching chain of events]. And both options look equally bad, no matter how you analyze them. Time is running out. Knight or queen, knight or queen. And so you move your bishop without any analysis at all.

Humans are weird that way.

Basically, choice A [move knight] has accumulated a heavy negative weight from all the analysis you performed. Choice B [move queen] has an equally heavy negative weight. And so, when a third choice presents itself with no negative weight, you jump at it, even though it also has no analysis. You can imagine a badly programmed chess computer following the same process. For any given board state, give all legal moves a positive score (based on the average of games from a database or magic or whatever). Take the move with the best score. Analyze the subsequent chain of moves (again, by database or magic), deducting points if the move leads to a poor board state. Knight starts off with a high score, but analysis drops it until it reaches queen's score. The program switches back and forth between knight and queen until both scores drop below bishop. Then, time's up. And a suboptimal move is made. 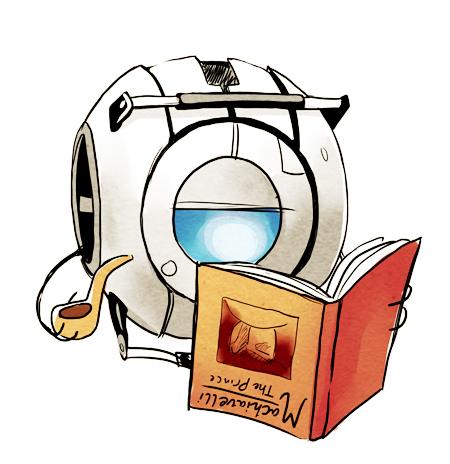 To quote David Mitchell, "If I knew how I knew everything I knew, I'd only be able to know half as much because it'd be all be clogged up with where I know it from."

The more time you spend analyzing how you arrived at a decision, the less time you have to make a decision. Heuristics (i.e. rules of thumb) are very handy. If you drop a kitchen knife, you can spend time analyzing its fall and preparing to catch it, or you can use the heuristic "a falling knife has no handle" and jump backwards and out of danger. If you use the heuristic "loud popping sounds means people are shooting at me and want me dead, I should get into cover", then you're likely to not get shot... and also skip the local firework displays.

But heuristics might make a paranoid AI (or a paranoid human) uneasy. To mangle a quote, adopt a heuristic and you adopt the beliefs of its creator. Bias creeps in. Logic and control go out the window.

Isomorphism is another double-edged sword. Humans interact with unknown systems using isomorphism. If some element of an unknown system can be mapped to a system we know, we will immediately become more comfortable, even if the isomorphism later proves misleading or useless. To put it another way, we like stories. Image recognition is a form of isomorphism, and can easily lead to dangerous misunderstandings.

Ideally, you want #c software on #c hardware. Sticking a hyperadvanced AI into a concealing shell of meat sounds great in theory, but it's like being soaked in treacle. Muscles are comparatively slow. The human eye is a wobbly mess of averaging, interpolation, blind spots, and blackness. If you want to get optimal results, replace all your hardware with something that can handle your new speed.

If you want to think fast, you need mass. Read-write speeds are the only real limitation, and locally those are currently well beyond 1c.

But a transistor/logic gate/ fancy quantum nodes have a minimum size. I'm willing to imagine small-molecule transistors on a surface; a handful of atoms at most. Current gates are in the 2nm range, so it's entirely plausible. But there's still a limit. We know that it's possible to simulate a human brain using an instrument approximately the size of a human brain (since we do it all the time), so that's a handy benchmark. Does the human body count as the support system?

Modern chips need to be cooled to be effective. It's easy to make a computer blowtorch-proof. It's hard to make it blowtorch-proof and portable. Flash memory is sturdier than spinning discs and magnetic tape, but a bullet-sized kinetic impact will still make a mess of delicate circuits.

I tried a few Fermi estimates to get approximations for scale-to-speed conversions, but the results varied too widely to be useful. Will the hardware needed to run a 1c AI be the size of a pebble, a brick,  a person, or a house? Darned if I know. If in doubt, the general trend is to aim small.

Current laundry folding robots look like photocopiers. Feed a cotton t-shirt into the tray and it gets folded. Not too impressive. More generalized laundry-folding robots require very specific and controlled conditions... and fold slower than a surly teenager on a Saturday evening.

A laundry-folding robot needs to identify edges in a mixed mass of material of varying colours and textures. It needs to then manipulate the fabric without damaging it, orient it correctly, identify axes, fold, and store the item. It needs to pair socks, deal with fitted sheets, and untangle some of the more complicated undergarmets. These are very difficult tasks. Cars, faces, and road signs are nice and predictable. Laundry is a mess.

I can imagine people fighting ambulatory AI with weighted tarps or sheets covered in misleading dazzle camouflage, false folds, and Möbius edges. Toss one over the robot and watch it struggle to get the thing off. Edge detection, flummoxed. Strength turned against itself (by pushing here, one might apply pressure there, and if the sheet is strong enough the robot could tear its own head off by accident).

It's difficult to imagine a superintelligence that would be flummoxed by a folded sheet, but blind spots or suboptimal tasks could still exist.

Currently, humans are the upper end of the local intelligence spectrum. Concern about consent runs backwards, towards children, animals, drunk people, etc. It doesn't run uphill because the adult human,
it is assumed, is already at the top of the hill.

But imagine a being that sees chess the way we see tic-tac-toe.  To quote that old post:


Scale 3, the scale I think is probably closest to true, says "On the scale of possible problem solving abilities, humans, dolphins, and cats are pretty much the same. If aliens exist, there's a very good chance our ability to solve problems looks like a worm's ability."

Thought Experiment 1
Imagine you are an explorer in a soft sci-fi setting and, at the same time, a decently moral human. You land on an alien planet. The Ooblecks that live there are willing to trade 1 bar of gold for 1 kg of salt. This is, for all involved, a reasonably fair deal. But you discover that if you put on a green floppy hat, the Ooblecks will trade 100 bars of gold for the same 1 kg of salt. This is not a fair deal.

Thought Experiment 2
Imagine you are a human in business on the present-day planet earth. You are aware that many recent studies show gift-giving, even of small and inconsequential gifts, biases decision-making and creates positive bonds.  You are also aware that businesses you want to have positive relationship with have rules preventing their employees from receiving substantial gifts.

Humans are terrible at pretty much everything. Long-term planning. Matching goals to methods. Working together. There are notable exceptions, but from an outside perspective, human history probably looks like an appalling shambles. There's no need to invent psychohistory to see that any interested superintelligence could probably play humanity like a fiddle. Figure out the drives, then steer with a hand concealed behind six layers of obfuscation.

But in direct dealings - trade, diplomacy, etc, assuming those are even possible or desirable. - a superintelligence is faced with a problem. Humans might sign a contract trading gold for salt. They might think they're getting a good deal. But the superintelligence might know otherwise. Even if the consequences are explained, humans might not be able to understand the explanation, or have the necessary mechanisms to grapple with the results.

Presumably, other superintelligences can go "oh for fuck's sake Garthrax, you're exploiting the lower beings again. Give the salt back and say you're sorry." Contracts are agreements of understanding, and if one side clearly doesn't understand, the contract does not exist.