It's tempting to think of medieval cities as islands in a vast sea of farmland or wilderness. Look at a certain modern medieval-ish TV series. Cities sit in splendid isolation. 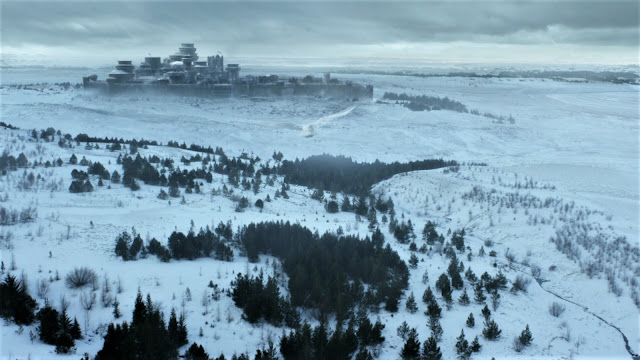 But in the real world, every medieval city had satellite towns within walking distance. Take Siena. 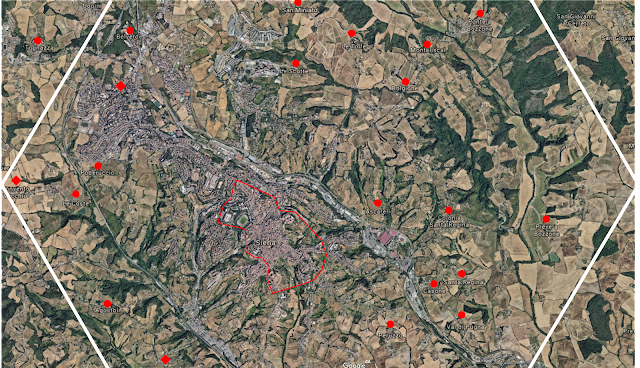 The red line covers (approximately) Siena's medieval walls. Red dots are towns or villages. Red diamonds are monasteries. The white outline is a standard 6-mile hex. I've covered how huge 6-mile hexes are before, but here's another example.

Thanks to the magic of Google Earth, you can even zoom in to see how far away, in 3D, those cities and towns are. The (slightly wonky digital) view from the top of Siena's Torre del Mangia shows dozens of sites in relation to the city's walls. Mercenary armies camped there. Rulers fled, monks plotted, bishops pronounced doom, fugitives hid, and rebellious factions raised banners. 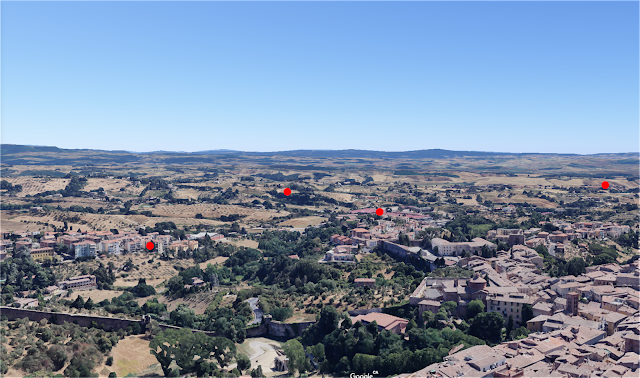 [The annual festival of the Virgin Mary] fell on the 15th of August, the day of her assumption to the side of her Son. To evoke that wonderful festival is not only to set before our eyes in material form the strange fusion achieved by the medieval mind of the life terrestrial and the life spiritual, but also to realize one of those gay and colored spectacles for which the modern world has no equivalent, and which are like the moving page of some blithe and exquisite romance.

A general animation became apparent in the city as the middle of August drew near. The town crier, sounding his trumpet before him, passed through the streets announcing the programme for the festival; at the same time he made proclamation concerning the great fair of three days, which, with characteristic prudence and in keeping with the homely character of the celebration, the government did not hesitate to associate with the season of thanksgiving. On the eve of the looked-for day fell the opening public act. All the citizens from the age of eighteen to seventy, forming in procession according to parishes and under the leadership of the parish priests, marched to the cathedral. For the greater glory of Our Lady each celebrant carried in his hand a lighted taper, and before the citizens went the magistracy, attended by the carroccio or car of state, upon which were conspicuous the official offering of candle and banner. Thus before sundown of August 14th, Siena had renewed its vows to the goddess of its choice and love.

But the next day came a procession of another kind, one which swelled the hearts of the old burghers with patriotic felicity. The castles, villages, towns, and monasteries, conquered outright or subdued under the euphemistic name of an alliance, knocked, as it were, at the gates of the city, and in the person of the proprietors or of elected delegates proceeded in solemn state to the duomo to repeat the oath of allegiance to the victorious commune. A scene more splendid and, at the same time, more feudal cannot be imagined. The free town was a perpetual protest against the feudal system, but when the problem presented itself as to how the shattered elements of feudalism were to be organized under the new sovereignty, the city leaders chose a solution which proved they could not emancipate themselves from the domination of current legal forms. They simply assumed towards the nobles and corporations of the county [the contado] the familiar position of suzerain.

The morning of the fifteenth, therefore, saw the procession of Sienese vassals march to perform an annual act of homage. In that procession were the proud descendants of the ancient counts of the city, mitered abbots or their mandataries, the representatives of villages and towns; and in their hands they bore, in honour of the Virgin, each one a lighted candle. Through dense and exultant crowds they made their way up the marble steps of the cathedral until they stood within the portal, before the desk of a secretary of the commune. To the humble scrivener, seated before a solemn ledger, they consigned their offerings, all destined for the service of the Supreme Lady and consisting of candle-wax, or banners of brocade, or money, according to the articles of submission.

Siena had, for a time, a huge and prosperous contado. This gif shows the tumultuous and somewhat baffling expansion process. It would be impossible to map all these locations. Instead, I'm going to rely on robust generators and scribbled notes on existing maps. The major cities and walled towns will be detailed ahead of time. Small towns, villages, and castles will pop into existence as needed.

Side Note: Sometimes I get lazy when researching a topic and skim wikipedia to get my bearings. I really need to remember to check Italian wikipedia for this project. English wikipedia doesn't even mention that L'armata Brancaleone's dialogue is a mish-mashed italian/latin doggerel. Online translation services are so good these days (and wikipedia's articles are so dull) that you can usually find valuable information.

Anyway, here's the current renamed map for the pointcrawl. 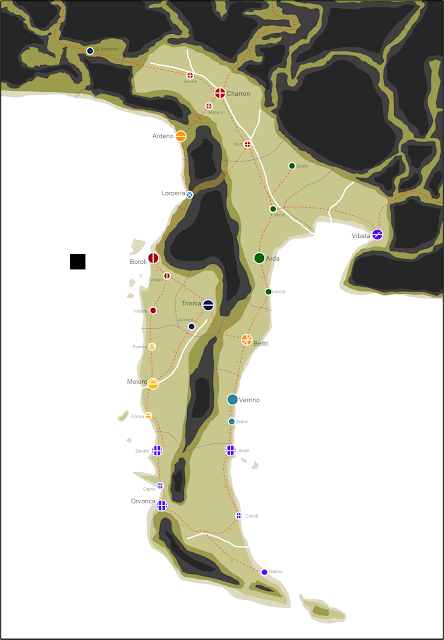 The black square is 10x10 miles. Red lines are major roads. Travel times (in days, on horseback, in good weather) are in red.

EDIT. If you want a fun project...

Step 1: Ask yourself "how many castles can there be in a 6-mile hex?"
Step 2: Download Google Earth Pro (free)
Step 3: Download and open this KML file. Backup.
Step 4: Go, "Oh, that's a lot of castles."
Step 5: You can use this hex grid overlay to put a section of 6-mile hexes on the map. 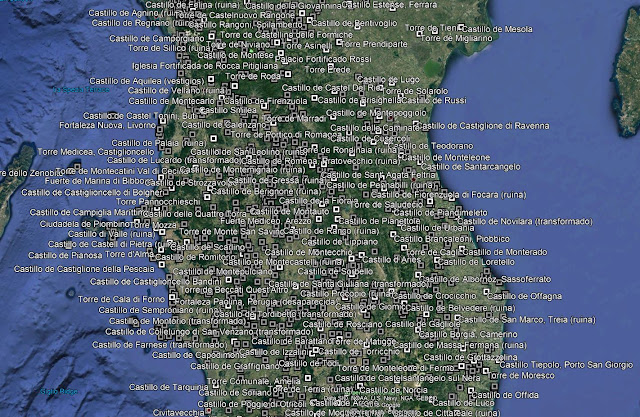 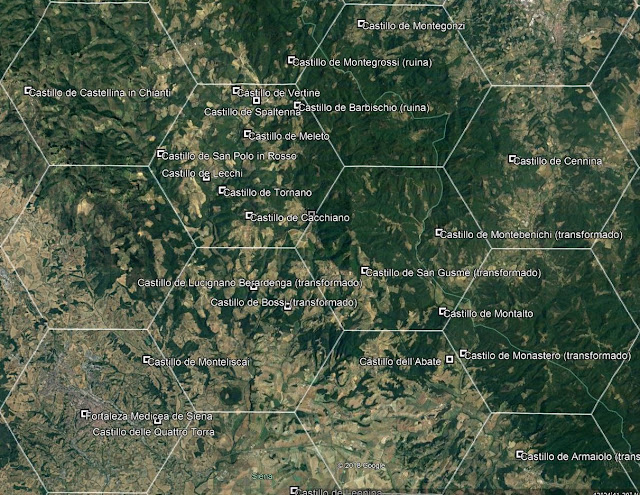 And that little region northwest of Siena isn't even a densely castled region!