I've been thinking about what to do with Benjamin of Tudela's itinerary. Originally, I was going to write a medieval pointcrawl, but now that I'm halfway through, I don't think I need to. With my notes and map, a suitable system (like Mercator), and a list of trade goods, a GM could run a passable pointcrawl right now. 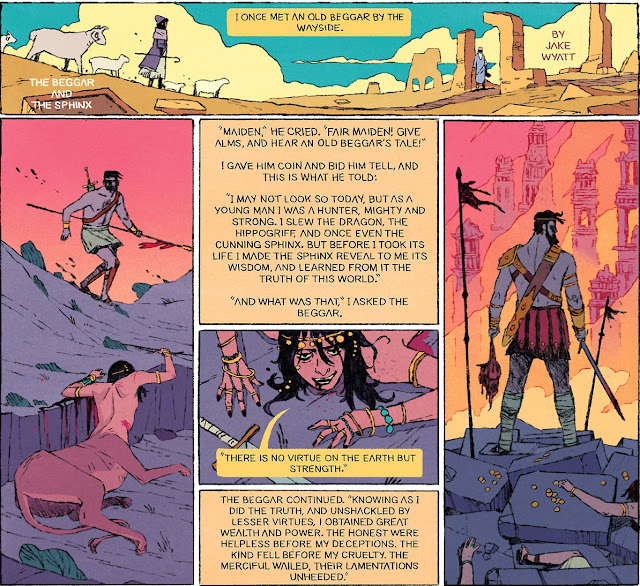 Usually, when writing historical posts, I try to find the truth within the tall tales, mistranslations, and wild guesses, and write posts about the interesting aspects of historical fact. What if instead I exaggerated the myths and stories? When Benjamin visits Damascus, he sees the rib of a world-conquering giant and a wall made of magic glass and he doesn't question it. His world wasn't dry and organized.
We exaggerate when we read and tell stories, especially if we aren't familiar with historical facts. We imagine anachronisms and things that never existed on a scale that's not possible. If you went to Sunday School, I'm sure your version of Biblical kingdoms, the Sea of Galilee, the Temple  of Solomon, etc. were all far grander than reality can support.

Dark Souls draws heavily from Arthurian legends. What if we draw from Alexandrian legends instead - specifically, the Romance of Alexander - and build a world based on mythical history, not reality? Rome as we imagine it was, not as it was. The Babylon of dreams. The core map will be based on 10th-12th century legends and travelers tales.

-Build a pointcrawl/merchant caravan game set in a Dark Souls-esque world.
-Use environmental storytelling. Provide the GM with the full story, but give the players hints and reward them for investigating the nature of their world.
-Mash together myths of civilization. File off the serial numbers but keep the core story concepts intact.
-Implement the Aesthetics of Ruin on a grand scale.

The Romance of Alexander starts with the last king of Egypt fleeing his country and, to exact his revenge, begetting a son through sorcery and deception.


AFTER THEY had determined the size of the earth and the sea and counted the stars of the sky, the wise men of the Egyptians imparted to the whole world power, the discovery and disposition of words, and the knowledge of practical skills. For it is said that the last king of Egypt, Nectanebos, after whom the kingdom fell from glory, conquered all men by magic sorcery; even the natural elements obeyed him.

Staring into the basin, he saw the gods of the Egyptians and they were leading the ships of the oncoming enemies from the barbarous nations—he was a man who was accustomed to being among and speaking with the gods magically through his sorcerer's skill. And upon learning that the kingdom of the Egyptians had come to an end, he filled his belt with much gold and silver and shaved his hair and his beard. Having disguised himself, he fled away, without anyone's knowing, through Pellousion; and after traveling through many lands, came to the Macedonian city of Pella.

We need god-king of course. Born of sorcery, world-conquering, he rules the west and the east and the south. He takes an army north into the Land of Darkness and finds many strange things. His army is lost to the numberless bestial humans living beyond the mountains. He drinks from the Fountain of Immortality. He returns with one servant and seals the Land of Darkness behind an iron wall. His five generals, fearing his power, betray him. Through sorcery, his soul is split into five pieces. The generals become immortal. They raise five great cities and usher in the Long Day.

But the day is fading.

At its core, Dark Souls is about a natural cycle replaced with an artificial one. In brief, empty mindless shells - hollows - find powerful souls in the first flame. They use these souls to conquer their environment. But the flame fades, and must be relinked by a powerful being to keep the age of fire going and prevent another age of darkness.

In this setting/game, the cycle is barbarism and civilization. A barbarian world is conquered and given form and order. Great cities rise. Then, barbarians attack, cast down the cities, and the cycle begins again. The cycle was interrupted by Alexander finding the Fountain of Immortality and building the Iron Gates. The age was meant to end long ago, but the Iron Gates hold back the barbarian hordes.

And as the Gates begin to fail, the Five Generals stir in their sleep, troubled by dreams of the north.

Names and details will be changed.

Cordoba - The Sunset City
In a fertile valley near the western edge of the world and the Ocean of Night. A grand city, a new city, not yet fallen to decay. The PCs will start here.

Baghdad - the Sunrise City
The grandest city. Hospitals, libraries, an oasis in the desert, surrounded by ruins of other capitals.
Other Cities
Alexandria -  Alexander's Tomb
Fallen Babylon
Damascus, City of Sorcerers
Genoa and Pisa, towers and pirates

The Steppes
Long distances, cold, and then the mountains and the Iron Gates. Strange people who have no cities. Exiles and madmen.

The Land of Darkness
Who knows? The Fountain of Immortality and other strange marvels.

-Benjamin's journey and other 10th-12th century accounts
-For the Iron Gates, I'm spoiled for choice. Just to show I'm not making this up:


The Arab geographers placed the lands north of the Caucusus in the Sixth and Seventh climes, the northernmost of seven  divisions into which the globe was divided. The peoples who inhabited this huge region were all considered descendants of Japeth, son of Noah, meaning that Chinese, Turks, Bulgars, Khazars, Alans, Avars, Magyars, Slavs, Lombards, Burgundians, and Franks shared a common ancestry. They comprised the majority of the world's population and their numbers were "uncountable as the sands of the sea" (cf. Revelation 20:8). Beyond the Seventh Clime lay the Land of Darkness, a mysterious, mist-shrouded land, inhabited by the tribes of Gog and Magog. These peoples, who appear in the Qur'an (18:92-8) under the names Yajuj and Majuj, as well as the biblical books of Genesis, Ezekiel, and Revelation, were also counted among the descendants of Japeth, and were more numerous than all the other peoples of the earth combined. They were separated from the rest of mankind by high mountains, behind which they had been penned by a rampart of brass and iron erected by Alexander the Great. It was believed that at the end of time, they would break free and spread destruction throughout the earth, heralding the Apocalypse and the final days of mankind.

[Their eschatological role] haunted the caliph Wathiq (reigned 842-847), grandson of Harun al-Rashid, who one night in 842, in the palace of Samarra outside Baghdad, dreamed that Gog and Magog had breached the barrier behind which they were imprisoned. He was so disturbed by the dream that he immediately sent an agent, Sallam the Interpreter, who was adept in more than thirty languages, to inspect "Alexander's Wall" and make certain the hordes of Gog and Magog were still safely imprisoned.

-Ibn Fadlan and the Land of Darkness, Penguin, introduction by Paul Lunde and Caroline Stone.

Listen now how these four kingdoms were overpowered one by the other, that of the Cushites by that of the Macedonians and that of the Macedonians by that of the Greeks, and that of the Greeks by that of the Romans. And these are the four winds of heaven which Daniel saw pouring forth the great sea. Philip, father of the king of kings Alexander, was a Macedonian, and whom did Philip take for wife? Cusheth, daughter of King PIl of the Cushites. And from her there was born King Alexander of the Macedonians. He built the great Alexandria and ruled in it twelve years. He went down to the East and killed Darius the Mede and conquered many places. And he marched round the earth and descended to the East and went as far as the sea called Fire of the Sun. And he saw there nations filthy and ugly to look at, who were sons of Japheth. And when he saw the abominable deeds which they were doing—they ate the vermin of the earth, mice and dogs and kittens, and they did not enshroud and bury their dead, and the embryos which the women aborted they ate as if it were some delicacy—and when Alexander saw their abominable deeds, he called God to his aid. And he assembled and expelled them and their wives and their sons, and all of their camps he expelled from the East.

And he placed them and enclosed them from the ends of the North inside the entrance which is the gate of the world from the North, and there is no other entrance nor outlet from the uttermost part of the world from East to West. And King Alexander prayed before God and God hearkened unto him. And God commanded the mountains called Sons of the North, and they drew near each other to a distance of no more than twelve cubits. And he [Alexander] made a gate of brass and anointed it on the inner side with Taseqtis. If one applies iron in order to open it, one does not affect it. And if one wants to melt it by fire, it quenches the fire brought near to it because the nature of Taseqtis is not affected by iron, nor by the operation of demons. Also not even fire can destroy it at all if it is applied to it, for these Unclean Nations who were imprisoned inside used all the wickedness of witchcraft. And through these two mighty things he brought to nought their entire activity so that neither through iron nor through the operation of evil spirits could it be opened before them and they depart and corrupt men and defile the earth. But at the end of the ages, as was the saying of the prophet Ezekiel which was prophesied concerning them, saying: In the end of times, at the end of the world, the followers of Agog and of Magog will come out upon the land of Israel.
-Apocalypse of Pseudo-Methodius

-It's hard to create loneliness and desolation in a 5+ player RPG. I can't use that aspect of Dark Souls, but I can use:
-Layers of ruin
-Cycles
-No true villains, just people (or gods) with motivations and goals
-Looping and branching paths
-Distributed lore. It's possible to play through all of Dark Souls and have no idea what's going on. The plot is hidden in item descriptions, the environment, and ambiguous dialogue.

-I'm not particularly concerned with emulating Dark Souls combat or items, though I will create custom classes for this setting.
-A pointcrawl with several detailed cities and several less detailed stops en route.
-Factions, trade goods, spells, secrets. -And yes, there will be monsters.
Posted by Skerples at 20:01