The original D&D cleric was a hastily added class designed to fight a vampire PC. The cleric drew from 2 main sources of inspiration: Hammer horror films and the Bible. This seems like a heady mix. Here are my thoughts on the origins of the spells on the original Cleric spell list. If there's an obvious reference I've missed, let me know in the comments.

Gary Gygax and Dave Arneson weren't biblical scholars but as far as I can tell they both had religious upbringings by American Midwest standards. They had what I call "Sunday School" knowledge - a clear view of the major points, a few good stories, but no controversies or details or tangents about history and authorship.

Have you ever seen a Christmas pageant? No pageant that I've ever seen follows either of the 2 nativity stories in Matthew and Luke. What's presented is a cultural amalgam, the sort of idealized, smoothed-over version of the story. That's "Sunday School" knowledge for you. This doesn't mean it's wrong or irrelevant. In fact, for this application, it's more than relevant. If we are going to track down the origins of the Cleric spell list, we can't look too deep into the text. The authors definitely didn't sit down with a reference guide and flip to "M for Miracle". They just went with the stories they knew.

But because it's my blog I'm going to include interesting tangents and quotations anyway.

These are clearly spells drawn from Biblical sources. More specifically, they are drawn from the many stories of Christ healing people - the sick, the lame, the blind, etc. Prayer heals. It's that simple.

Tangent: One of my favorite healing stories in the Bible is found in Mark, 8:23-25.


He took the blind man by the hand and led him outside the village. When he had spit on the man's eyes and put his hands on him, Jesus asked, "Do you see anything?"

He looked up and said, "I see people; they look like trees walking around."

Once more Jesus put his hands on the man's eyes. Then his eyes were opened, his sight was restored, and he saw everything clearly.

There are other healing stories in the Bible, but this one has always felt special to me because it mirrors, in a very prescient way, what really happens when people who are blind regain their sight. Just being able to see isn't enough;  you need to comprehend what you are seeing. And somehow, by adapting an old folk story (the spitting seems a bit out of genre) or a real event, the author of Mark realized that and wrote it into the story. 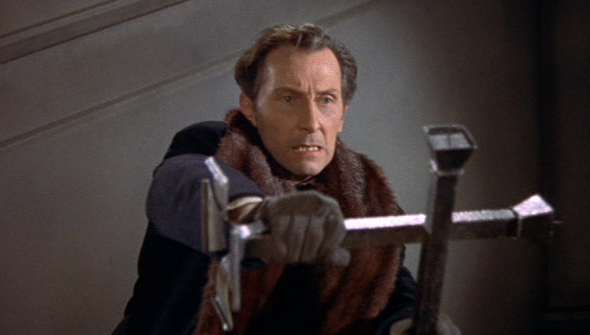 These spells are drawn from the playbook of Peter Cushing as Dr. Van Helsing. He's a Doctor, so he Knows Things, like what stuff is magic, what stuff is evil, and, more importantly, how to protect yourself and destroy the evil. These spells don't feel like "Sunday School" spells, but they're absolutely in the Hammer Horror film repertoire.

Tangent: The reference to "magic" reminds me of Simon the Sorcerer and Phillip the Evangelist. Never was there a better example of "player character mentality when it comes to divine powers." Acts 8:5-25. I'll let Fred Clark explain.


Philip took his include-the-excluded commission very seriously, so the next time we hear from him he’s in Samaria. He’s at a sorceror’s house in Samaria. And he’s just baptizing everyone there all willy nilly.This is happening while most of the leaders of the first Christian community are all still huddled back in Jerusalem, still working through the reservations they have post-Pentecost about whether everybody means everybody.

“Everybody means everybody” is pretty much the theme of the book of Acts. “In all Judea and Samaria, and to the ends of the earth.” The apostles seem to have taken that step-by-step, a bit haltingly. Philip didn’t. Pentecost hits and he just says, “Oh, wow, I get it!” and he races off to … let’s see, what’s the most despised and excluded place you can think of? Right, Samaria. And once there he starts passing out the baptisms like Oprah giving away cars.

This surprises the apostles back in Jerusalem, who were still at that point mostly going, “Now when Jesus said ‘all Judea’ did that really mean all Judea? …” Philip caught them off guard by skipping ahead to the “and Samaria” bit.

So Peter and John head to Samaria to see what Philip’s been up to, and to maybe assert a bit more control over his indiscriminate evangelism. They arrive and discover that some of Philip’s brand-new converts are still acting and thinking like brand-new converts. Simon (the Samaritan sorceror, not the apostle) greets them by saying, “This anointing of the Holy Spirit thing is awesome! How much?” So the apostles explain that God’s grace isn’t for sale, and they rebuke Simon, who apologizes. Then Peter and John turn to have a word with Philip, but he’s already gone.

There are two, apparently separate events where Jesus feeds many people by miraculously increasing the number of loaves and fishes. Most people consider this a sort of copy-paste issue, or at the very least an editorial problem. In any case, it doesn't matter. The Loaves and the Fishes is a proper Sunday School story. There's also the Manna from Heaven that appears in Exodus.

I can't find a specific biblical story where someone takes inedible or poisoned food and makes it edible, but the Bible, particularly Numbers and Leviticus, is full of references to purity and purification. The rules are very clear on what makes a thing unclean; they are less clear on how to purify an unclean thing, especially food or water. I'm going to chalk this one up to general background Biblical feel, with no specific reference in mind.

There are plenty of medieval stories of poisoned food being blessed to purify it, but I'm not sure the authors knew about them. It might be one of those vague cultural things - an idea common to all cultures that eat.

Again, there's no specific reference or story about blessings, but a thousand vague background-radiation references.

Create Water
This spell comes from the Sunday School version of Exodus. Moses strikes a rock; the rock brings forth water.

Tangent: The Exodus version of Exodus is fairly straightforward. The Numbers version is... much weirder. The article linked features a mobile biblical water fountain.

Commune
I'm not sure the authors had a specific story in mind for this spell. There are too many to choose from.

Quest
The Bible is full of bizarre quests and commands from above. I'm not sure which one the authors had in mind when they wrote this spell, but the story of Jonah is a strong candidate. The bit with the big fish is the Sunday School bit; the rest of the book rarely gets discussed. But it's a very good story anyway.
Two options spring to mind. The first, and the most likely to appeal to Gygax's sense of humour in my opinion, is the story of Balaam's Ass. The second is St. Francis of Assisi's many animal stories, including taming wolves and speaking to birds.

Tangent: Balaam's Ass is the bit of the story everyone remembers, but the story itself is utterly bizarre, and really needs a scholarly interpretation like Paul Davidson's.

Speak with Plants
The only Sunday School reference I can think of is Jesus cursing the fig tree. I'm not sure if this spell was included to reference that story, or to maintain symmetry with "Speak with Animals", or just because it was a cool spell.

Either this spell was included to reference Saint Anthony's miraculous powers, or it was just good game mechanics.

Tangent: If you grew up in a Catholic family (or some Anglican families), chances are you've heard someone chant


Tony, Tony,
look around.
Something's lost
and can't be found!

while searching under the sofa or in the umbrella stand for a lost set of keys or something. It's not the most reverent ritual, but it's a charming one.
Raise Dead
The story of Lazarus is the main Sunday School source for this spell. Jesus raises a fair number of people from the dead, but Lazarus' story is the most likely candidate to stick in the minds of the authors. The specific references to days in the spell matches the story's details.

Tangent: To add to the confusion, there are two Lazuruses (Lazurii?) in the New Testament. The second Lazarus is part of a parable; the first is just a guy. 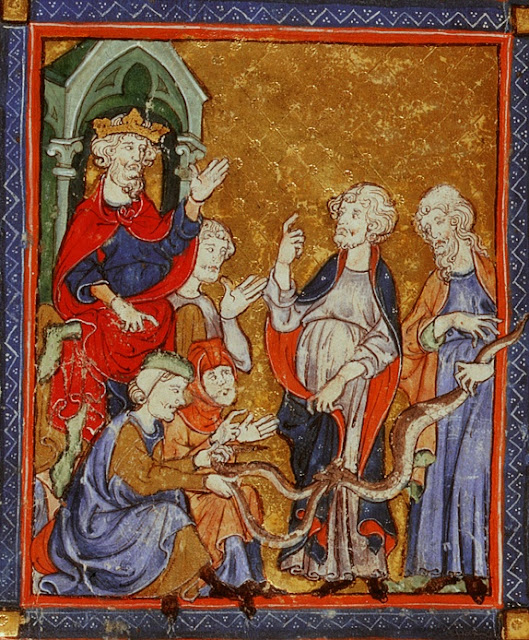 Here's the Sunday School version of the story of Moses, taken straight from this site.


When Moses was born the Hebrews were slaves in Egypt. Pharaoh was afraid of them because he thought they might take over his country. He ordered that all Hebrew baby boys be killed at birth so that they would not grow up and fight against him. To save Moses his mother made a plan. She hid him in a basket by the side of the River Nile.
Moses' sister Miriam watched over him until Pharaoh's daughter came to the river to wash. She found Moses in his basket. Miriam told her she knew a woman who could be a nurse for the baby. It was his mother. Pharaoh's daughter took him back to live with her as though he were her son. Moses grew up as an Egyptian prince, but he never forgot he was a Hebrew. One day Moses lost his temper and killed an Egyptian who had beaten a Hebrew slave to death. He had to run away to another land. God spoke to him from a burning bush and told him he must go back and free the Hebrews from slavery.

Moses went to Pharaoh to ask him to set the Hebrews free. Pharaoh did not want to lose his slaves. He would not let them go, because they worked on his grand buildings. Awful things began to happen in Egypt. There were ten plagues. Before each one, Moses had warned Pharaoh what would happen. Moses told him the disasters had been sent by God. The last plague was the worst. The eldest son in every Egyptian family, including Pharaoh's, died. God had warned Moses to mark the doorposts of all Hebrew houses so that Hebrew boys would be safe. Pharaoh was so upset by losing his son that he said the Hebrews could leave Egypt.

But that's not really the full story. It's a very nice, simple, and tidy version of what's in the text. And the text is a real mess. Once again, Paul Davidson cuts through the confusion and explains the details.

If all you know is the Sunday School version (through the beautifully apocalyptic animated version), you might have forgotten that the text has Egypt's magicians repeating every plague, 1:1. That's right, these guys could also properly cast Turn Sticks to Snakes and Insect Plague, apparently. No smoke and mirrors required.

As an aside, one wonders how the magicians of Egypt managed to duplicate Aaron’s miracle of turning all the water of Egypt—even the water stored in pots—into blood. What water did they have left to work with? Of course, the entire story is mythical and hyperbolic. The “contest between magicians” was a popular folktale genre, and keeping that theme intact trumped the need for logical consistency.
[...]
An attentive reader will spot other examples of overkill as well—often verging on the comedic. In the second plague, for example, Aaron causes the land to be overrun with frogs; and then the Egyptian magicians do the same thing! One can only imagine how pleased Pharaoh was with their performance.

Email ThisBlogThis!Share to TwitterShare to FacebookShare to Pinterest
Labels: meta