The aesthetics of ruin are famously important to the OSR. Vathek, as one of the first Gothic novels, has received plenty of attention in the OSR and elsewhere, but I feel like a few elements could be reviewed. 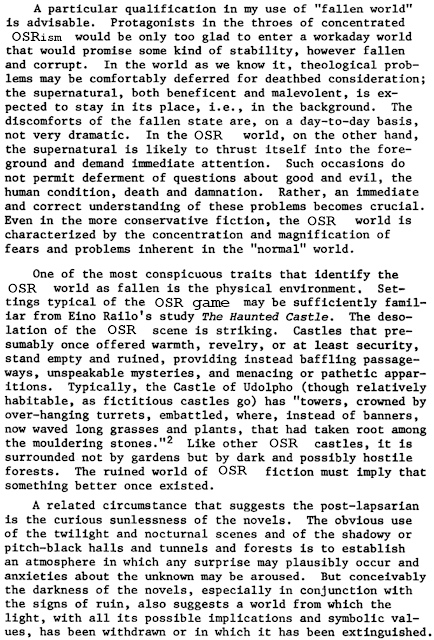 Quotes from "The Gothic Novel, 1790-1830: Plot Summaries and Index to Motifs" by Ann B. Tracy, with "Gothic" replaced by "OSR".
Instead of summarizing the plot, let's jump right in to the middle of the text. Vathek, the caliph and titular character, is supposed to be taking his entourage to the gates of the infernal realms, there to gain access to the treasures of the Pre-Adamite Sultans, etc. His mother, Carathis, remained behind, but a letter has just arrived informing her that Vathek is dawdling in an emir's palace instead of finishing his quest.

I've lightly edited the text. You can read the original here, though reading Vathek online isn't a great experience. I suggest finding a physical copy if you can. Complaints about my edits can be sent to Byrd Park, Richmond VA.

No person knew aught of Vathek, and a thousand ridiculous stories were propagated at his expense.  The eagerness of Carathis may be easily guessed at receiving the letter, as well as her rage at reading the dissolute conduct of her son.

“Is it so,” said she; “either I will perish, or Vathek shall enter the palace of fire.  Let me expire in flames, provided he may reign on the throne of Soliman!”

Having said this, and whirled herself round in a magical manner, which struck Morakanabad with such terror as caused him to recoil, she ordered her great camel Alboufaki to be brought, and the hideous Nerkes with the unrelenting Cafour to attend.

“I require no other retinue,” said she to Morakanabad: “I am going on affairs of emergency, a truce therefore to parade!  Take you care of the people, fleece them well in my absence, for we shall expend large sums, and one knows not what may betide.”

The night was uncommonly dark, and a pestilential blast ravaged the plain of Catoul that would have deterred any other traveller however urgent the call; but Carathis enjoyed most whatever filled others with dread.  Nerkes concurred in opinion with her, and Cafour had a particular predilection for a pestilence.  In the morning this accomplished caravan, with the wood-fellers who directed their route, halted on the edge of an extensive marsh, from whence so noxious a vapour arose as would have destroyed any animal but Alboufaki, who naturally inhaled these malignant fogs.  The peasants entreated their convoy not to sleep in this place.

“To sleep,” cried Carathis, “what an excellent thought!  I never sleep but for visions; and as to my attendants, their occupations are too many to close the only eye they each have.”

The poor peasants, who were not over pleased with their party, remained open-mouthed with surprise.

Carathis alighted as well as her servants, and severally stripping off their outer garments, they all ran in their drawers to cull from those spots where the sun shone fiercest, the venomous plants that grew on the marsh.  This provision was made for the family of the emir, and whoever might retard the expedition to Istakar.  The woodmen were overcome with fear when they beheld these three horrible phantoms run, and not much relishing the company of Alboufaki, stood aghast at the command of Carathis to set forward, notwithstanding it was noon, and the heat fierce enough to calcine even rocks.  In spite, however, of every remonstrance, they were forced implicitly to submit.

Alboufaki, who delighted in solitude, constantly snorted whenever he perceived himself near a habitation, and Carathis, who was apt to spoil him with indulgence, as constantly turned him aside; so that the peasants were precluded from procuring subsistence; for the milch goats and ewes which Providence had sent towards the district they traversed, to refresh travellers with their milk, all fled at the sight of the hideous animal and his strange riders.  As to Carathis, she needed no common aliment; for her invention had previously furnished her with an opiate to stay her stomach, some of which she imparted to her mutes.

At the fall of night Alboufaki making a sudden stop, stamped with his foot, which to Carathis, who understood his paces, was a certain indication that she was near the confines of some cemetery.  The moon shed a bright light on the spot, which served to discover a long wall with a large door in it standing a-jar, and so high that Alboufaki might easily enter.  The miserable guides, who perceived their end approaching, humbly implored Carathis, as she had now so good an opportunity, to inter them, and immediately gave up the ghost.  Nerkes and Cafour, whose wit was of a style peculiar to themselves, were by no means parsimonious of it on the folly of these poor people, nor could any thing have been found more suited to their taste than the site of the burying ground, and the sepulchres which its precincts contained.  There were at least two thousand of them on the declivity of a hill; some in the form of pyramids, others like columns, and in short the variety of their shapes was endless.  Carathis was too much immersed in her sublime contemplations to stop at the view, charming as it appeared in her eyes.  Pondering the advantages that might accrue from her present situation, she could not forbear to exclaim:

“So beautiful a cemetery must be haunted by Gouls, and they want not for intelligence! having heedlessly suffered my guides to expire, I will apply for directions to them, and as an inducement, will invite them to regale on these fresh corpses.”

After this short soliloquy, she beckoned to Nerkes and Cafour, and made signs with her fingers, as much as to say:

“Go, knock against the sides of the tombs, and strike up your delightful warblings, that are so like to those of the guests whose company I wish to obtain.”

The servants, full of joy at the behests of their mistress, and promising themselves much pleasure from the society of the Gouls, went with an air of conquest, and began their knockings at the tombs.  As their strokes were repeated, a hollow noise was heard in the earth, the surface hove up into heaps, and the Gouls on all sides protruded their noses to inhale the effluvia which the carcasses of the woodmen began to emit.

They assembled before a sarcophagus of white marble, where Carathis was seated between the bodies of her miserable guides.  The princess received her visitants with distinguished politeness, and when supper was ended, proceeded with them to business.  Having soon learnt from them every thing she wished to discover, it was her intention to set forward forthwith on her journey, but her servants, who were forming tender connections with the Gouls, importuned her with all their fingers to wait, at least till the dawn.  Carathis, however, being chastity in the abstract, and an implacable enemy to love and repose, at once rejected their prayer, mounted Alboufaki, and commanded them to take their seats in a moment.  Four days and four nights she continued her route, without turning to the right hand or left; on the fifth she traversed the mountains and half-burnt forests, and arrived on the sixth before the beautiful screens which concealed from all eyes the voluptuous wanderings of her son.

Vathek as an RPG Session

GM: The letter informs you that your son is delayed at the palace of an emir.
Carathis: Oh shoot. We're going after him. I tell my servants to prepare my camel...
GM: Your giant evil camel?
Carathis: Of course my giant evil camel. I'll take two hirelings, Nerkes and Cafour...
GM: Your mute one-eyed hirelings?
Carathis: Yup. Is the vizier still here?
GM: Yes, you were just playing chess.
Carathis: I whirl around and shout, uh, "Either I will perish, or Vathek shall enter the palace of fire!"
GM: The vizier looks confused. Also, I'm not sure that's an or-statement.
Carathis: I don't care. Oh, and I tell him not to forget to collect taxes. Camel! And away!

GM: You come across a pestilential marsh.
Carathis: Are there poisonous plants here?
GM: Yes.
Carathis: Great. I'm going to make some poison, just in case. I'll have my hirelings help.
GM: Just in case of what?
Carathis: You never know. Poison is always useful.

GM: Your giant evil camel detects a cemetery nearby.
Carathis: I knew that ability would come in handy. We should stop.
GM: [rolls] Aaaand your guides are dead.
Carathis: Wait, what? Why?
GM: You haven't given them food or water for more than 24 hours, and you've been traveling the whole time.
Carathis: Fair enough. Wait... are there Ghouls in this cemetery?
GM: [rolls] There might be.
Carathis: I want to try and lure them out with the bodies. They'll be much better guides.

GM: Your hirelings are trying to seduce the Ghouls.
Carathis: Damn it, not again!

Notes on the Author

William Beckford (1760-1844) was, at the time of publication, 21-year-old incredibly wealthy slave-owning complicated pederast who wrote Vathek over (allegedly) 3 days of feverish effort. Honestly, if you didn't know that, you'd probably figure it out by reading the text. It's basically author-insert Arabian Nights fanfiction, straight out of the early internet. Take your problematic author bingo card, dip it in ink, and laminate it.

Beckford was also one of the all-time great English eccentrics. The story of Fonthill Abbey is well worth a read. Echoes of theme parks and film studios; worlds that never were, "the creation of an erratic but powerful imagination" willing - or even compelled - to drag the unreal into the unreal.

He is also dead.

Vathek contains an interesting mix of dread and humour. Some of the dread is the stuff found in dreams. It's hard to explain, in the waking world, why it a dream was terrifying, but it makes perfect sense at the time. Conveying that in a novel takes real talent.

Sure, it's pure Orientalism, but it's more nuanced than some of its contemporaries. Beckford managed to capture some of the themes of various classic tales while adding new and interesting elements. He did his research (or, more accurately, devoured all the available source texts and Vathek as a way of releasing the pressure of a fevered imagination). Is it authentic? No. The "academic footnotes" added by the Reverend Samuel Henely, the well-meaning translator, only add to the joke. Beckford winks at the audience, revealing that it's just a story being told, not a cultural history or a poetic introspection. Vathek the character is a wry stand-in for Beckford. Carathis is his mother, while Nerkes and Cafour could be references to family friends, notorious servants, or Woosterian Aunts.

Such a blend of horror and farce, ambition and folly, subconscious expression, cultural pilfering, treasure, scenery, and the supernatural fit RPGs perfectly.