40k: Bighead and the Pale Pinks of Hieronymus Bosch

I'm working on a new miniature painting project. I'd like to create an army based on the works of Hieronymus Bosch and Pieter Bruegel the Elder. It's not really a 40k project. I'm not sure these miniatures will ever be used for a game, but it's a fun experiment.

The core of the project is Mike Darpa's Chaos Army sculpts from Eureka Miniatures. 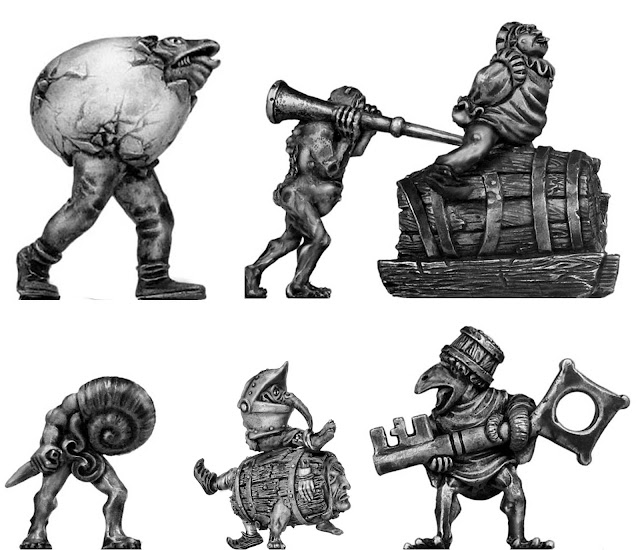 Supplemented by a few sculpts from the Pond Wars range.

And some miniatures from Ana Polanšćak (best known for Gardens of Hecate).

Along with a few odds and ends from the bottom of the bits box.

-The Triumph of Death by Skull and Crown. Right theme, wrong genre.

-The Nightfolk by Northumbrian Tin Soldier. They're nice sculpts, but a little too stylized for this project. They've got comically squashed proportions.

-Bruegelburg by Lead Adventures. I like the other lines Lead Adventure has, but this line has always felt a bit odd. Lots of squashed proportions and extraneous detail. The focus is on Bruegel's comic/allegorical/pastoral scenes in any case.

-Medieval Demons by Antediluvian Miniatures. The line is a curious mix of 12th-14th century marginalia and 16th-17th century daemonology, like The Lesser Key of Solomon and similar works. I like a good multi-faced demon, but they feel predictable and formal alongside the chaotic anti-symbology of Bruegel and Bosch.

-Medieval Marginalia by Old School Miniatures. The concept is nice, but the sculpts are a bit crude.

Despite employing every element from the natural and manufactured world, there is one classic symbol missing from the hells of Bosch and Bruegel. Human skeletons never appear.

In the medieval code of symbology, the Skeleton-as-Death is a fixed property. Animal skeletons (particularly horses and birds) appear, but humans, even when mangled, eviscerated, or contorted, are still pink and whole. The medieval skeleton, skin stretched over ribs, would be as symbolically inappropriate.

In contrast, Warhammer demons have skulls all over the place. Even Ana Polanšćak can't resist putting a skull on her demonic snail. I've tried to avoid skulls and skeletal limbs on the majority of the converted figures.

I've chosen to use square bases for this project to help force the miniatures into a coherent sculpture group. The idea of an utterly chaotic army - in size, colour, and composition - neatly stacked in rows appeals to me. It also makes them easier to store.

I'd like to make a special wall cabinet for this army, with a painted background and some gold leaf, like a little icon case. I'm not sure if I'll adapt an antique or make one myself.

French-Burgundian culture of the waning Middle Ages counts among those cultures in which beauty is replaced by splendor. Late medieval art reflects the spirit of the late Middle Ages faithfully, a spirit that had run its course. What we had posited as one of the most important characteristics of late medieval thought, the depiction of everything that could be thought down to the smallest detail, the oversaturation of the mind with an endless system of formal representation, this, too, constitutes the essence of the art of that time. Art, too, tries to leave nothing unformed, unpresented, or undecorated. The flamboyant Gothic is like an endless organ postlude; it breaks down all forms by this self-analyzing process; every detail finds its continuous elaboration, each line its counterline. It is an unrestrainedly wild overgrowth of the idea by the form; ornate detail attacks every surface and line. That horror vacui, which may perhaps be identified as a characteristic of end periods of intellectual development, dominates in this art.

-Autumn of the Middle Ages, Huizinga

Bosch and Bruegel, while still reveling in the joy of details and overgrowth, reject the formal and stagnant symbolism of high medieval art. Their demons are anti-symbolic, a hideous mix of humans and assorted animals, of funnels and casks, fish, frogs, and musical instruments. The elements invite interpretation without adhering to any code known to the viewer.

Some classic symbols creep in. The Beast of Revelation, with seven heads and seven crowns, is buried beneath the avalanche of assorted demons in Bruegel's Fall of the Rebel Angels. Inversions abound; a man kissed by a lecherous pig in a nun's habit, a knight devoured by his hounds, etc. But what can we make of a pair of ears, pierced by an arrow, and sprouting a knife? The strange man-tree-eggshell with boats for feet? Pink stone towers with crystal rods? Are these dream-images or features deliberately chosen for their lack of clear symbolic connection?

This anti-symbology, combined with inversions, can lead to elements of farce. The demons are disconcerting but rarely frightening. They're a sort of divinely sanctioned wunderkammer; a mix of curious animals, vegetables, and minerals. Anything strange in nature can be included.

There is one area where the addition of ridicule to the most serious matters seems garish: the dark arena of the belief in devils and witches. Although the fantasies about devils were directly rooted in the deep fear that nourished this belief, the naive imagination nevertheless rendered such figures so childishly colorful and so familiar to everyone that they sometimes lost their terrifying aspect. It is not only in literature that the Devil appears as a comic figure; even in the gruesome seriousness of the witchcraft trials Satan’s company is frequently fashioned in the manner of Hieronymus Bosch and the hellish smell of sulfur blends with the fluff of the farce.

-Autumn of the Middle Ages, Huizinga

I'm going to try to paint the figures with oils, using only colours available to Bosch and Bruegel. If you think my techniques with acrylics are a bit slapdash, just wait until you see what I do with oil paints. It'll be a glorious disaster.

The ground in the works of Bosch and Bruegel is typically very flat, designed to highlight the figures. There are tufts of grass and distinct trees, but meadows or earth are almost featureless. Distance is implied with a gentle gradient; tricky to do with miniature basing unless you arrange the figures in the same configuration every time.

I'm going to try a layer of fine sand mixed with very fine flock to create a slightly textured but mostly flat layer. I need to put something on the base to cover up the pewter slots and injection marks. I think I'll mostly stick to earth tones.

I've primed the miniatures and I'm experimenting with painting techniques. Oils are fun but difficult. It's been many years since I've worked with oil paints, and it definitely shows.

If anyone knows of any other ~28mm miniatures that would work for this project, let me know.