I'm working on a book of monsters for D&D-type RPGs. You can read more about it here. It's designed to be a functional at-table book. Not a moral bestiary, not a book of fictional ecology, but a practical utility-focused reference guide. A book of prompts. 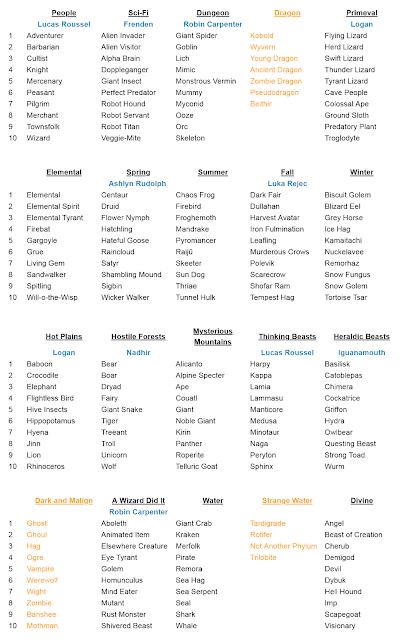 The last chapter needs some aquatic monsters. Most of the creatures you'd expect are in the "Water" chapter; but "Strange Water" needs strange monsters.

Give me your weird, your odd, your forgotten creatures yearning to be known. Are you mad that the creature you spent years studying never gets any press in mainstream Dungeons and Dragons books? Did you see something odd and unique in a documentary? Tell me about it! Post a comment. Nerd out. Get technical. Sell it to me.

Or, if you don't know, send this article to your friends. The more suggestions, the better.

These aren't strict, but they're good guidelines.

Has To Be Able To Move
I don't want to include sessile (stationary) organisms. If a creature can't move, interaction is limited. This excludes sponges, most tunicates, brachiopods, etc. If it's stuck to a rock, it's out.

Has To Do Something
You don't need stats for a tree. Filter-feeders, drifting salps, fancy diatoms, etc. are out. If a D&D party can't reasonably fight it, or if it can't fight back, it doesn't need stats. Jellyfish are borderline; for D&D purposes, "Ooze" might cover their abilities.

Has To Do Something Unique
If an entry can be represented by "X, but Y", then it doesn't need a separate entry. Categorizing creatures for D&D purposes is a very Borgesian experience. You can cut across millions of  years and different time scales with a few lines. The statblock for "Seal" can cover Dolphin, Orca, and Moasaur; all function, for D&D purposes, in approximately the same way.

A fairly up-to-date list of what's in the book can be found here. If in doubt, suggest something.

Scale isn't an issue. Things will be scaled up to a suitably menacing size.

Each chapter of the Monster Overhaul has 10 entries. Here's what I've got so far for the "Strange Water" chapter.

1. Abyssal Fish
You know the type. Glassy flesh, too many teeth, large eyes (or no eyes at all), phosphorescent patches, etc.

2. Giant Starfish
All echinoderms. Starfish, brittle stars, sea urchins, and feather stars. Anything radially symmetrical that could slowly wander up to you, grab you with one of several arms, and stuff you into its mouth.

3. Elemental Eel
This is a weak entry, and the first that I'd cut. [Creature] + [Element] is something that can be easily templated. Wolf + Ice = Winter Wolf. Bear + Fire = Fire Bear. Do these ideas really need a separate entry? Still an electric eel is fairly weird.

4. Mantis Shrimp
They're weird, colourful, fairly well known, and have a D&D-like attack. I feel like they're sufficiently different from other entries to warrant their own section.

5. Polychaete Worm
I've got a few other Worm-like entries, but polychaetes tabulate well (lots of variants) and have some unique twists. It's not the strongest entry, but it's not the weakest either. I know calling it a Polychaete Worm is like calling it an ATM Machine, but it helps with navigation.

6. Predatory Snail
To include the classic Flail Snail, as well as surfing snails, poison dart snails, and all other sorts of snails. Could even include sea slugs, if I've got space for non-shelled variants.

7. Rotifer
A giant rotifer, big enough to swallow a human and create a vortex of water. I can't see any objection to this entry; it can also provide stats for any other aggressive filter-feeders a GM might need.

9. Trilobite
Trilobites are famous and tabulate well. I'm going to use this as a catch-all entry for anything vaguely arthropodal that's a) not a wagon-sized Giant Crab and b) not a human-sized Giant Spider. Scaled up to approximately dog-sized.

I'd like to include a "Generic Arthropod Generator" near the Trilobite statblock. Basically, a table-based flowchart with illustrations that lets you fuse segments/tagmata and get various Burgess Shale-type hard- or soft-bodied arthropods out the other side. Necessary? Hardly. Wise? Probably not. But damn it, I want one, and I'm going to make one, even if I have to hire a consulting biologist or two.

What should the 10th entry be? What existing entries should be revised, discarded, or improved?

Email ThisBlogThis!Share to TwitterShare to FacebookShare to Pinterest
Labels: OSR, The Monster Overhaul