Note: If you haven't read Ultraviolet Grasslands, most of this writeup will seem like psychedelic heavy metal Mad Libs. Even if you have read UVG it's going to be a mess.

The surviving members of the Cat's Meow Trading Company are:

Granville Porter
Cogflower necromancer lawyer. A mutant human thief/necromancer and warlock of Kon-Fabulate. Equipped with starscape skin, a vibrating thumb, a telephone that talks to dead people, and a surprising number of explosives.

Lapis
Bluelander engineer and autowagon mechanic. A human hunter on the run. Member of the Bluelander Liberation Front.

Clovis
Exiled pirate liberal. A half-elf barbarian chased out of the Red Lands for their radical views, Clovis has a chainsword and a tattooed map to an aerolith fortress.

Karl
Wine vampire priest. A dwarf forcebender wizard and warlock of Deel, Orbital Wargoddess. Full of a strange blend of bloodlust and diplomacy.
The escape pod rose like a vengeful angel... then sputtered like a misfiring camp stove. Its blue-white engines flickered and failed. After a gentle parabolic arc, it smashed into the ground a few kilometres away from the buried star chariot.

Inside, Clovis, Lapis, and Granville were safely coated in a protective layer of foam. A few minutes after impact, the foam slowly dissolved into a thin oil. Clovis scooped up some oil and self-annointed. "Praise foam!" was all the half-elf said for the next ten minutes.

While Granville tried to find the controls to the exit doors, Lapis searched the escape pod for oldtech loot. He found 3 compact paleonuclear batteries, a brass plasma rifle, a few tins of nutrient paste, and a mysterious packet of white powder.


Side Note: Oldtech Plasma Rifles
An oldtech plasma rifle runs on paleonuclear batteries. Each battery has 6 charges. Each charge add 1d6 damage to a shot from the rifle. You can drain a battery completely to fire an apocalyptic 6d6 plasma blast, or fire off six 1d6 damage puffs. Past 3d6, rolling to hit at close range is irrelevant. Recoil and splash damage become important considerations.


With pockets full of loot, the three explorers cautiously emerged from the escape pod. They were pleased to discover that they were not in some unknown land or among the fast stars, but still within sight of the crashed star chariot and their rapidly approaching caravan.

But their crash had attracted the attention of other wanderers in the Grasslands. Sir Dr. Chunksalot, M.D was a cat lord healer sent to assist Dusty, a human unicorn farmer who'd lost her whole herd to a vomish infection. They'd just concluded a preliminary meeting when the escape pod landed.


Side Note: Dr. Chunksalot, M.D is a cat lord, an intelligent telepathic cat with a bound human "pet" named Sir. This gets very confusing.

While Clovis tried to recruit the cat lord and farmer into their trading company, Gormog and Karl finally arrived with the party's carts and hirelings. The group decided to continue west to the potsherd crater. Since Dusty was vaguely familiar with the region, she agreed to act as a guide.

The first night was uneventful. The group encountered eight Veggie-Mites lead by a sprout-bearded prophet. Attempts to communicate detailed information failed, but the diminutive potato-folk seemed to be quite suggestible. They continued traveling by night, leaving the Cat's Meow Trading Company behind.

The next morning, the party had to rescue the Veggie-Mites from an irate Sphinx. The incomprehensible babbling of the creatures couldn't be interpreted as an answer to any riddle. The party also left Lapis to answer a riddle of her own; the gregarious Bluelander had stepped forward to bombard the Sphinx with questions and the rest of the party didn't want to get involved.

Pleased at their own cleverness, and with a gaggle of overawed Veggie-Mites in tow, the party reached the edge of the Potsherd Crater a week later. They decided to explore an abandoned porcelain quarry to see if any useful loot remained behind. Dr. Chunksalot, M.D, being merely a cat, was the obvious choice to lower into the quarry to scout the lightless bottom, where the faintest alluring ultraviolet glimmer was visible.

Sadly, the bottom of the quarry contained giant poisonous toads. One leapt up and swallowed the cat lord. The group hauled the cat and toad to the top of the pit, yanked their new friend out, beat the toad into a pulp, then cleaned off the poisonous secretions using Karl's convenient package neatly spell.

Furious and hissing, Dr. Chunksalot, M.D insisted on being lowered into the pit again to blast the toads with a wave of mutilation spell. Many toads were shredded.

The next morning the party planned their second expedition into the quarry. The glimmer at the bottom came from a crate of valuable ultraviolet porcelain. If the crate could be hauled from its watery Carrying Dr. Chunksalot, M.D under his arm, Granville descended to the bottom of the quarry.

Side Note: One of the things I love about OSR-type games is how you can make one bad decision, then a string of really good ones, and still get utterly screwed over when the bad decision reaches full maturity.

This session is a lesson in how quickly things can go from bad to worse to apocalyptic.

Round 1:
At the bottom of the quarry, gripping a rope in both eerily human hands, Dr. Chunksalot, M.D prepared their mission. Granville braced and threw the cat lord like a javelin. The rest of the party watched from the lip of the quarry high above.

The cat lord flew straight into a waiting toad's mouth. Everyone winced. Clovis and the group's hirelings hauled on the rope.

Round 2: Dr. Chunksalot, M.D burst from the toad's mouth and ascended like a damp and poisoned missile. Lapis shot the toad with her bolter. Granville decided to wade into the water and haul the crate up himself.

Round 3:
Lapis attempts to revive the cat lord. In desperation, the bluelander opened the mysterious packet of powder looted from the escape pod, believing - without  a shred of evidence - that it was a powerful healing substance.

Instead, the powder exploded into a 50' cube of dense white foam. Lapis and Karl were launched off the edge of the quarry. Dusty and Clovis were embedded in the cube. Gormog was trapped on the far side, away from the action.
Granville, with the crate of ultraviolet porcelain in one hand, began to rapidly climb out of the quarry.

Round 4:
Karl cast sturdy circle in the air. A solid ring of stuckforce appeared in front of the falling wizard. He grabbed onto it, did a full 360 flip, and was flung downwards at the same speed as before.

Side Note: the test to grab onto the ring was really, really easy. He botched it. So it goes.

Lapis drew the oldtech plasma rifle and loaded one paleonuclear battery. At the last possible moment, she fired a setting-5 blast. The colossal energy beam evaporated several dozen giant toads, filled the bottom of the quarry with steam, and launched the Bluelander high into the air and out of the quarry entirely.

Clovis crawled through the cube and attempted to revive the cat lord. Sadly, the cat had expired from toad poison and multiple impacts.

Round 5:
Karl smashed into a particularly rocky section of the quarry floor and died on impact. Thanks to a mutation obtained from discount super-soldier serum, the wizard had a thick lead skin. He was also carrying a giant paleonuclear battery looted from the crashed star chariot's main power plant.

Ordinarily, lead shields people from radiation. Lead is good. But smashing a nuclear core and then coating some sub-critical material in a thick layer of neutron-reflecting lead is, in the words of many physicists, "a very bad idea."

Lapis reloaded the plasma rifle and fired a 2-setting blast to steer sideways and into the foam cube. She created a Lapis-shaped hole in the cube's side, then popped out on the far side and landed on both feet. "Woo!" she screamed, in terror and excitement.

Granville reached the top of the quarry. "Run!" he said, and sprinted for his porcelain walker. The thief knew Karl had been carrying a paleonuclear battery.

"Trust in foam!" Clovis replied, and crawled into the centre of the foam cube. Dusty joined the half-elf.

Round 6:
The group's hirelings started to move the carts. Lapis started up her autogolem. Granville, cradling his haul of looted porcelain, set his porcelain walker to full speed and closed the windows. 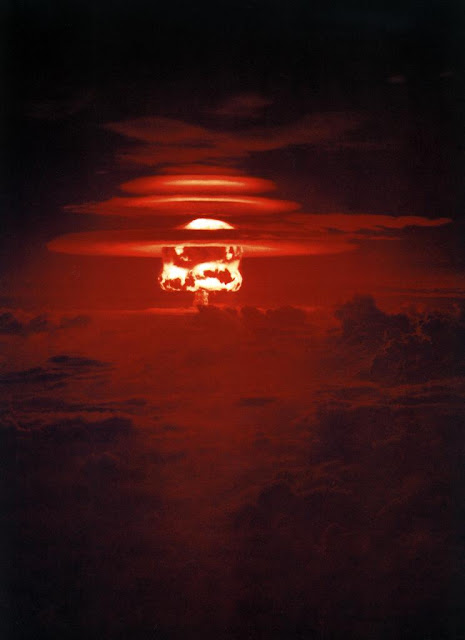 Side Note:
The nuclear reaction was on a dice-based countdown. I decided to start rolling after 1 round. On a 1, the explosion occurs. Dice size is d12 the first round, d10 the second, d8 the third, etc. First roll was a 1. So... boom. If you commit to a random countdown, you commit to that possibility.

The blast was channeled upwards by the quarry's walls, but the pressure wave still boiled outwards. The group's mules and carts were smashed. In her open-topped autowagon, Lapis had no protection from the blast. Granville was luckier; his walker flew like a missile, lost its legs to low-lying terrain, skipped over a hill, and crashed into a gravel scree nearly three kilometers from the quarry.

Gormog, being a heavily VOME-ified half orc, was tossed a few hundred meters by the explosion but emerged from the rubble remarkably unharmed. As he later explained, he was part fridge, and the ancient texts say fridges are immune to nuclear explosions.

The foam cube briefly formed thick hexagonal plates. The blast compressed it, but instead of disintegrating, the cube was launched high into the air. It drifted like a falling snowflake.

In the eerie red-filtered light of atomic fallout, the survivors emerged. Granville was an inch from death, but deathbed prayers to his god Kon-Fabulate hauled him back to life. One Veggie-Mite miraculously survived by clinging to the side of the golem, though the poor creature resembled a baked potato rather than a health vegetable. Granville attempted to console it.

Gormog emerged from his rubble pile, scratched what remained of his head with his one intact hand, realigned his magnetic coils, and slouch-walked south.

Some of the Cat's Meow Trading Company had survived a self-inflicted nuclear blast in the Ultraviolet Grasslands. What else could they possibly encounter?

Find out next time.